The Valencia Containerised Freight Index continues its upward trend, rising 17.85% in May

The Valencia Containerised Freight Index (VCFI) continues its upward trend started in August 2020 and grew by 17.85% in the month of May to reach 2,728.18 points. The index shows positive figures in all but two of the areas under study, with strong rises in areas located in the American container. The increase in maritime traffic in European countries added to the problems of waiting times in North American ports and the price of fuels are other conditioning factors that put upward pressure on the general index.

One of the key factors in the evolution of freight rates is the behaviour of demand. In this sense, the latest RWI/ISL produced by the Leibniz Institute for Economic Research shows a growth in port traffic in April after two months of stabilisation. According to the report, the role of the European ports has played a determining role in this sense, since, after a few months of lower activity due to the confinement in some countries, the recovery of Europe has allowed an increase in container traffic. Moreover, the recent Good Trade Barometer produced by the World Trade Organisation (WTO) indicates a strong recovery in international trade. Among the indices that make up this barometer, the strongest increases were recorded in export orders, air transport and electronic components, all of which are highly predictive of near-term trade developments. The strength of the automotive products index may reflect improved consumer sentiment, as confidence is closely linked to sales of durable goods. 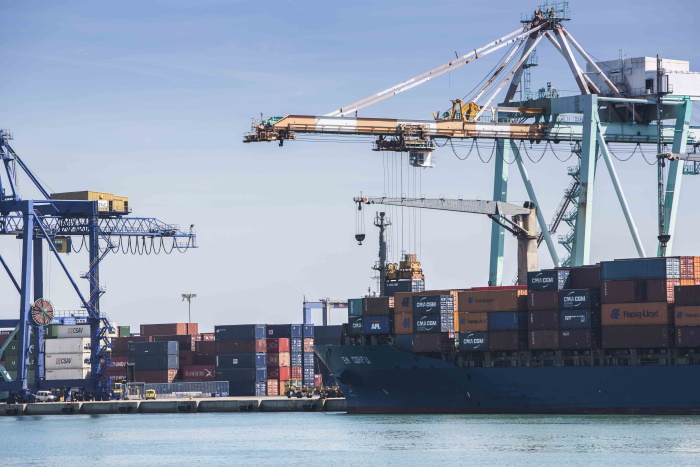 On the other hand, according to Alphaliner data, the commercially idle fleet remains at record lows for another month due to buoyant demand. Specifically, 70 vessels are idle, representing 1% of total capacity. These data show that the supply of capacity in the market is high for all vessel segments.

By geographical areas, the strong increases for the third consecutive month with the countries located in the American continent stand out, especially in the areas of Latin America Pacific (46.04%), the United States and Canada (29.88%) and Central America and the Caribbean (26.29%). Although it is true that export traffic (cargo) from Valenciaport with many of the countries in these areas reflects an upward trend, other factors may also be influencing their behaviour. These include the waiting time for berthing in some US ports, the capacity problems and lack of equipment associated with the current situation, and the strength of demand in some markets. In fact, according to data from the Shanghai Container Freight Index, freight rates between China and the East Coast of the United States reached their highest ever since records began in October 2009.

About the Western Mediterranean sub-index, in the month of May it grew at a rate of 2.5% and reached 1,784.64 points, which represents a moderation with respect to the two previous months, whose value was close to increases of 20%. Thus, this sub-index has now been on an upward trend for five consecutive months, accumulating an increase of 78.46% since the beginning of the series. In this case, it seems that this rise is due to the current situation and the generalised situation in the increase of freight rates in most areas, which is influenced, for example, by the shortage of equipment and difficulties in obtaining slots (reservation of time to make a journey).

The Far East sub-index, on the other hand, after the reduction of the index in April, grew again in May by 6.20% compared to the previous month. Thus, the VCFI for this area stands at 3,312.77 points, an increase of 231.28% since January 2018. Beyond the common factors that have been discussed throughout the text and which are general for all areas, it is necessary to highlight the good performance of export traffic from Valenciaport with the markets located in this area. Although it is true that in April (the latest data available), the levels of flows were at much higher levels than in the same period of the previous year.
Source: Port of Valencia