Preparations for the largest privately-owned residential yacht, The World, to sail the Northwest Passage across Canada from Nuuk, Greenland to Nome, Alaska this summer have included the purchase of a Miko Plasters Polar Kit as defence against the risk of being holed by ice. A team from Oslo-based Miko Marine AS flew to Reykjavik, Iceland in early August where they demonstrated the techniques developed for applying a magnetic patch to seal any hole caused by accidental contact with hard ice as might occur in open water or drift ice. Crew members were able to practice the simple but unfamiliar methods used to close a hole sustained from above the waterline to a few meters down without endangering a diver in freezing sea conditions.

In 2012, 196-metre The World, set the record to become the largest passenger vessel to sail the Northwest Passage unescorted from west to east. The World returns to this historic Arctic sea route in August/September 2019 to complete a ‘double transit,’ sailing this time from east to west. The owners of its 165 residential apartments experience the adventure and scenery of the Arctic from the luxury of their own on-board homes. Today, in 2019, they will have the added reassurance that comes from being protected by the only system capable of quickly and effectively sealing a hull puncture from the outside in freezing waters without the use of divers. 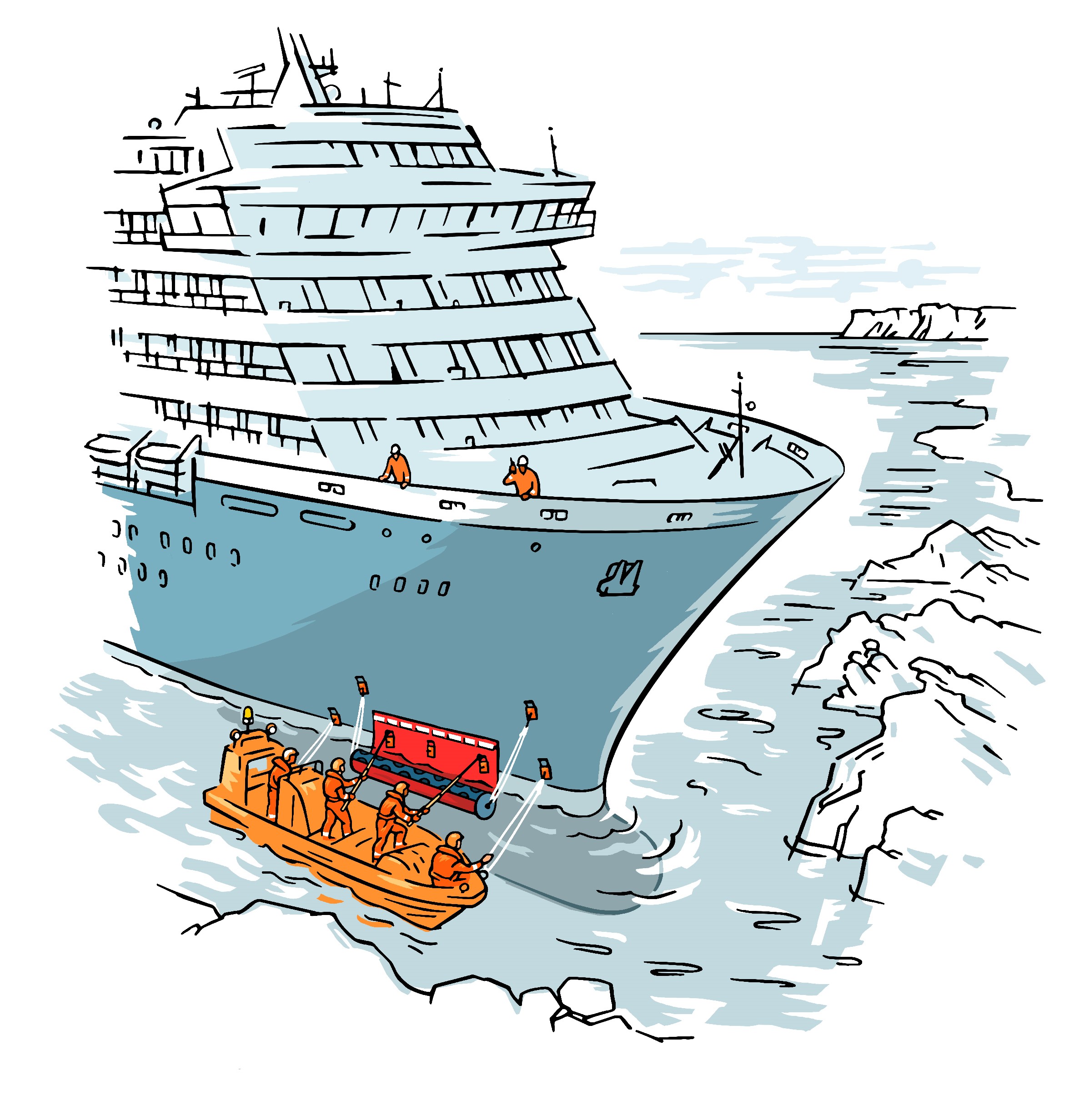 Each Miko Plasters Polar Kit contains a range of magnetic patches from which, after inspecting the damage following an incident, the most suitable size can be chosen. A system of individual high-power permanent magnets, each capable of holding 450 kg, is then deployed to create fixing points on the ship’s hull above the hole. These support the installation drum from which the plaster is then unrolled horizontally or vertically. Acting like a giant fridge magnet, but with vastly superior holding power, the plaster sticks instantly over the hole with external water pressure providing extra adhesion. More magnets are then applied to ensure that it remains in place until permanent repair is possible.

Miko Plasters are widely used in the marine industry but usually require professional divers to ensure an effective seal under water. Because such professionals are unlikely to be available for most passenger or commercial vessels, the Miko Plasters Polar Kit offers the only other known option for creating a durable water-tight seal. Traditionally seafarers will attempt repairs from inside the ship by using timber carried especially for the purpose. Given the structural complexity of most modern ships, internal access to the damage is likely to be difficult, if not impossible, due to pipes, tanks and other fittings. Under these conditions the ship’s pumps become the only means of countering the ingress of water but they cannot always be relied-on due to the risk of a power failure. 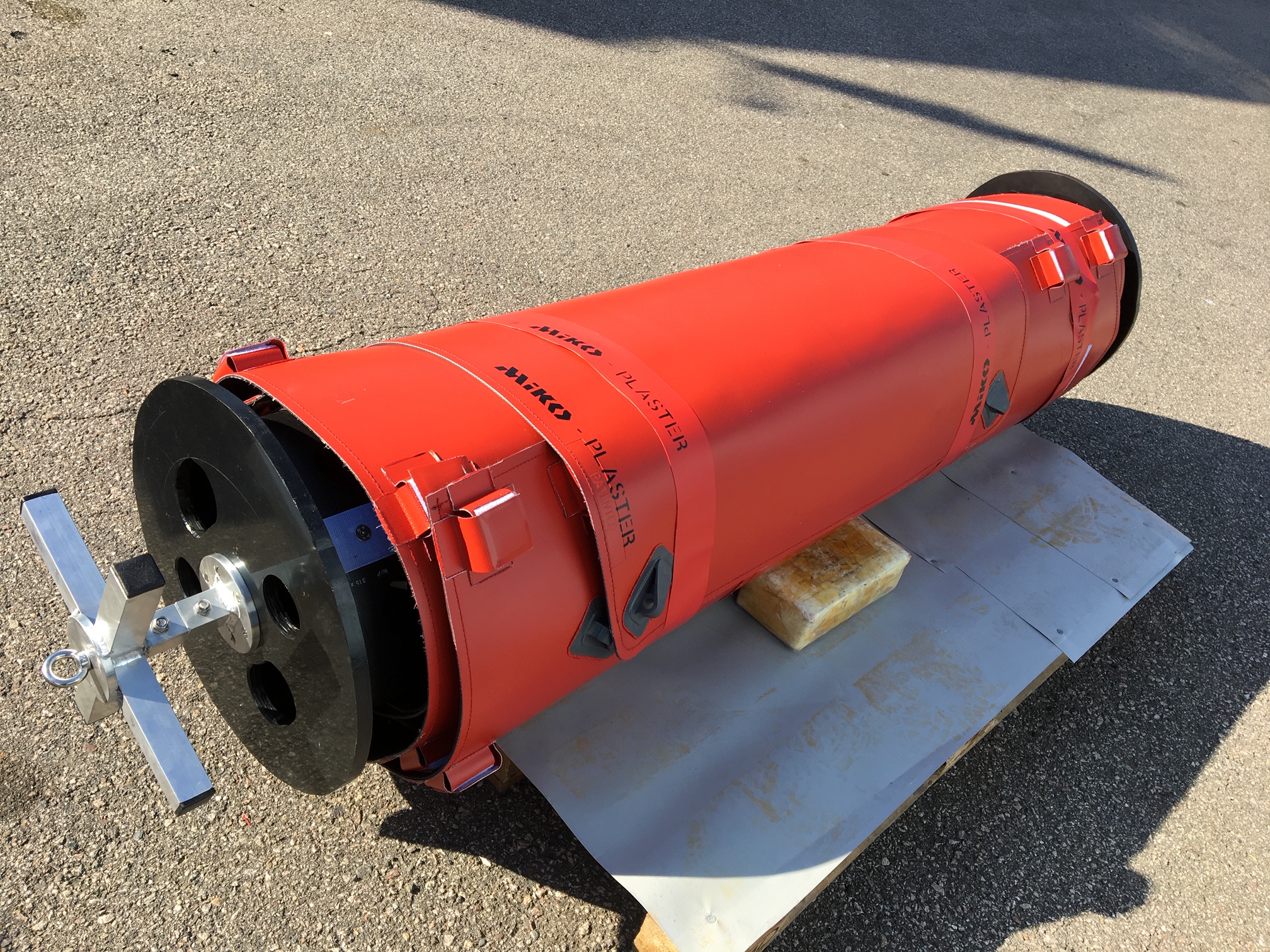 The Miko Plasters Polar Kit is a product of practical Norwegian seamanship and the know-how gained from centuries of polar sailing experience. Professor Norvald Kjerstad, of the Norwegian University of Science and Technology is a recognised global authority on polar navigation and its risks. After watching a recent demonstration of the Miko Plaster Polar Kit in Norway he said that he believes that it can make a major contribution towards the safety of arctic shipping. “This is the type of equipment that should be carried by all vessels operating regularly in polar regions,” he said. As one of the experts responsible for working with the IMO and drafting the Polar Code, he was immediately able to see the Kit’s benefits. “It is practical to use and is a demonstration of the preparedness required by ships seeking to comply with the Polar Code,” he said.

Miko Plasters are available in kits created for a variety of specific tasks. In addition to the new Polar Kit these include a Salvage Kit, Tanker Kit and Yacht Kit. The magnetic patches are called Miko Plasters due to their simplicity of application. They are manufactured by a process that mixes rare earth particles with an exceptionally strong blend of Nitrile rubber. A finished patch will weigh 10 kg per square metre so an additional layer of buoyancy material is also laminated to the patch so that it can be easily handled under water by divers. These two layers are then laminated onto an external fabric manufactured from high strength PVC.
Source: Miko Marine