In November 2020, stock markets around the world rallied after initial results for the coronavirus vaccine developed by Pfizer and BioNTech showed the jab to be up to 95% effective, with the FTSE 100 jumping 5% and the Dow Jones Industrial Average up 5.6% in opening trade.

There was a similar boost following a successful trial announcement for the Moderna vaccine and after the first dose of the Oxford University/Astrazeneca vaccine was given in the UK. But is the arrival of vaccines a sign that the economy will soon be bouncing back?

Since the COVID-19 crisis began, global GDP has fallen by 4.2%. The rollout of vaccine programmes will help to steady the ship – but the rate at which countries recover, including upticks in employment and consumer confidence, depends on how quickly they are able to bring the virus under control.

A tale of two halves

Although the pandemic has had a devastating economic effect around the world, Asian countries have recovered much faster – in particular, China, which experienced only a moderate dip in 2020 and which the International Monetary Fund (IMF) predicts will see 8.2% in real GDP growth in 2021.

Overall, countries in emerging and developing Asian economies are projected to see GDP growth of 8% this year, thanks to early public health interventions and government fiscal support. Europe, in contrast, will only see GDP growth of 5.2% in 2021, while for the United States, that figure is just 3.1%. 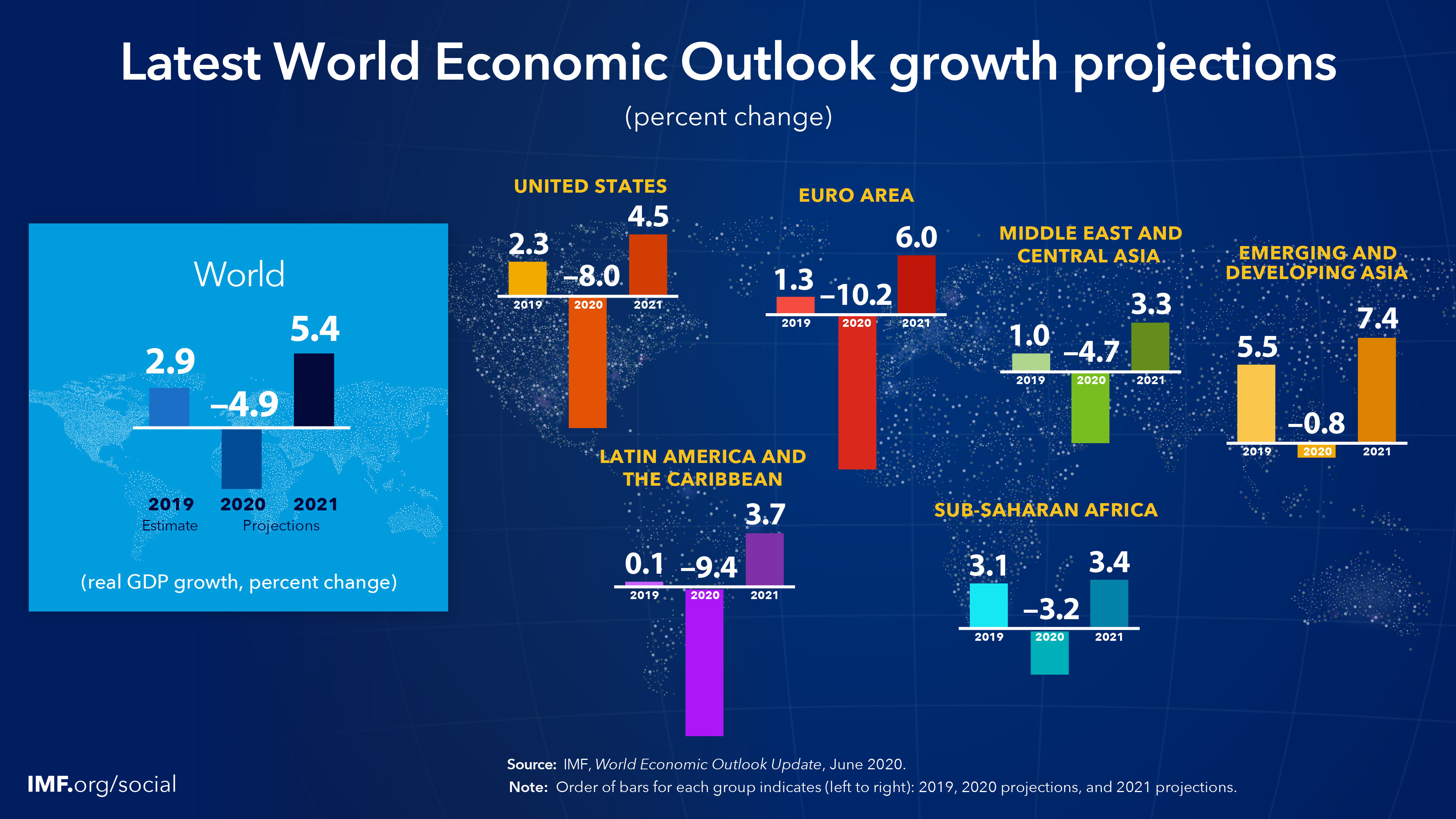 In the US, low-income earners and those from minority groups have been badly affected. According to Pew Research, nearly half of American adults with lower incomes have struggled to pay their bills since the start of the pandemic. Black Americans have also been hit hard, with 28% reporting difficulties in meeting their rent or mortgage payments. 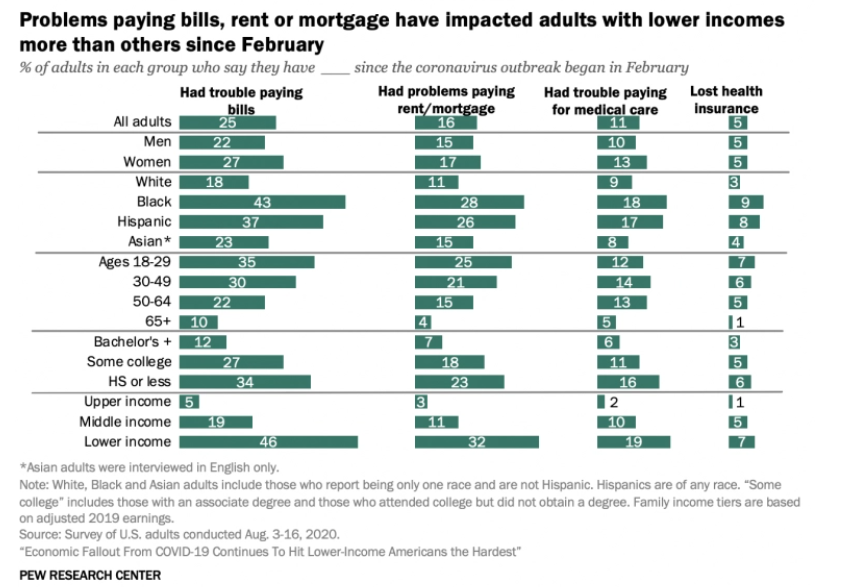 Those on a lower income have been the most affected. Image: Pew Research Center

Lower-income earners who lost their job because of the coronavirus are much more likely to be out of work, with 56% still unemployed – and 60% of workers who took a pay cut still earning less than before.

The employment gap for Black Americans, meanwhile, has got wider: more than 11% of Black men were unemployed in October 2020, compared to just over 5% of white men. 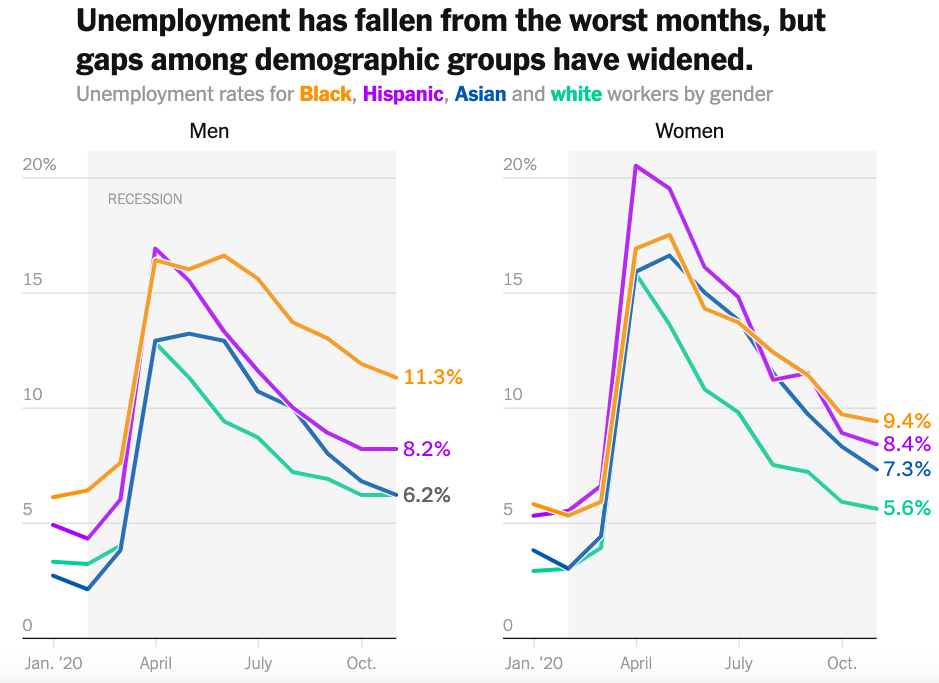 Black men in the US are nearly twice as likely to be unemployed. Image: New York Times

The cost of living has gone up 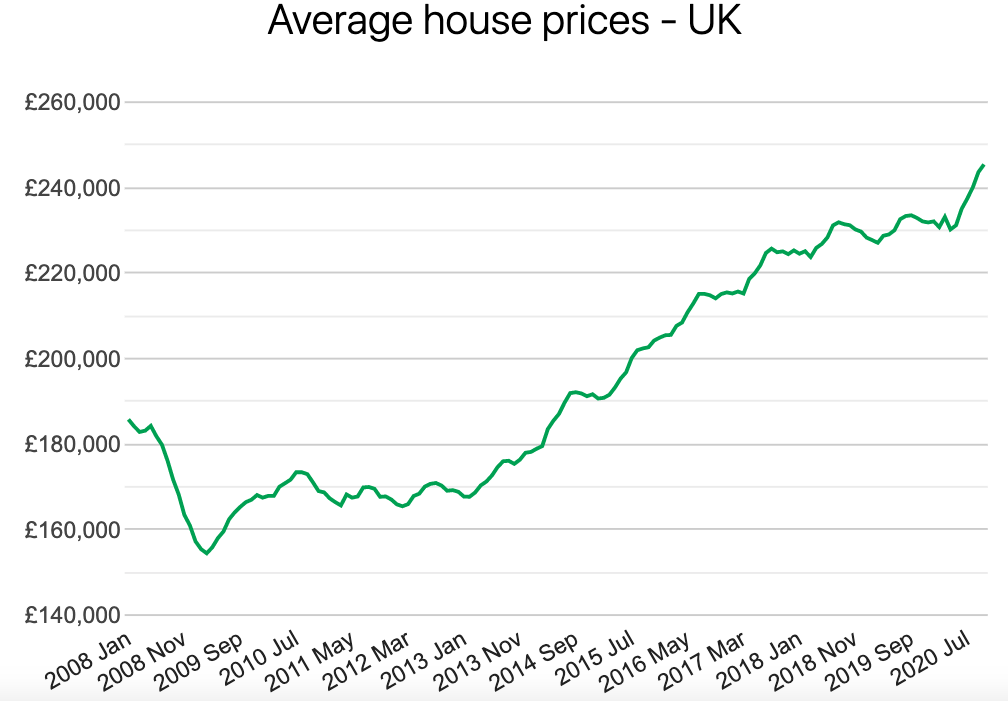 Hose prices have risen in the UK. Image: PropertyData

At over £240,000 ($326,000), average UK house prices are at a record high, with demand driven by an increase in home working and the need for more space, and temporary property tax breaks offered by the UK government.

But those figures have priced many first-time buyers with smaller deposits out of the market, with 69% saying they would wait for the pandemic to pass before trying to purchase a property.

It’s a similar story in the US, where median prices had reached $324,000 by Q3 of 2020. “It is inequality which is, to my mind, the major challenge to the economy going forward,” Susan Wachter, a real estate economist at the University of Pennsylvania, told The New York Times, “exacerbated by the impact on housing markets, with rents up, wages down and housing prices increasingly unaffordable and mortgages increasingly difficult to access for first-time buyers.”

House prices have continued to rise in the US. Image: Federal Reserve Bank of St Louis

In 2020, American consumers shifted their spend from services to retail goods, with groceries and consumer durables like home appliances outpacing restaurants and travel as consumer spending held steady over the summer months.

But in Asian countries with greater optimism around a COVID-19 recovery, spending is higher on items such as clothing, cars and hotels, and consumers are more likely to shop differently to the way they did before the pandemic. 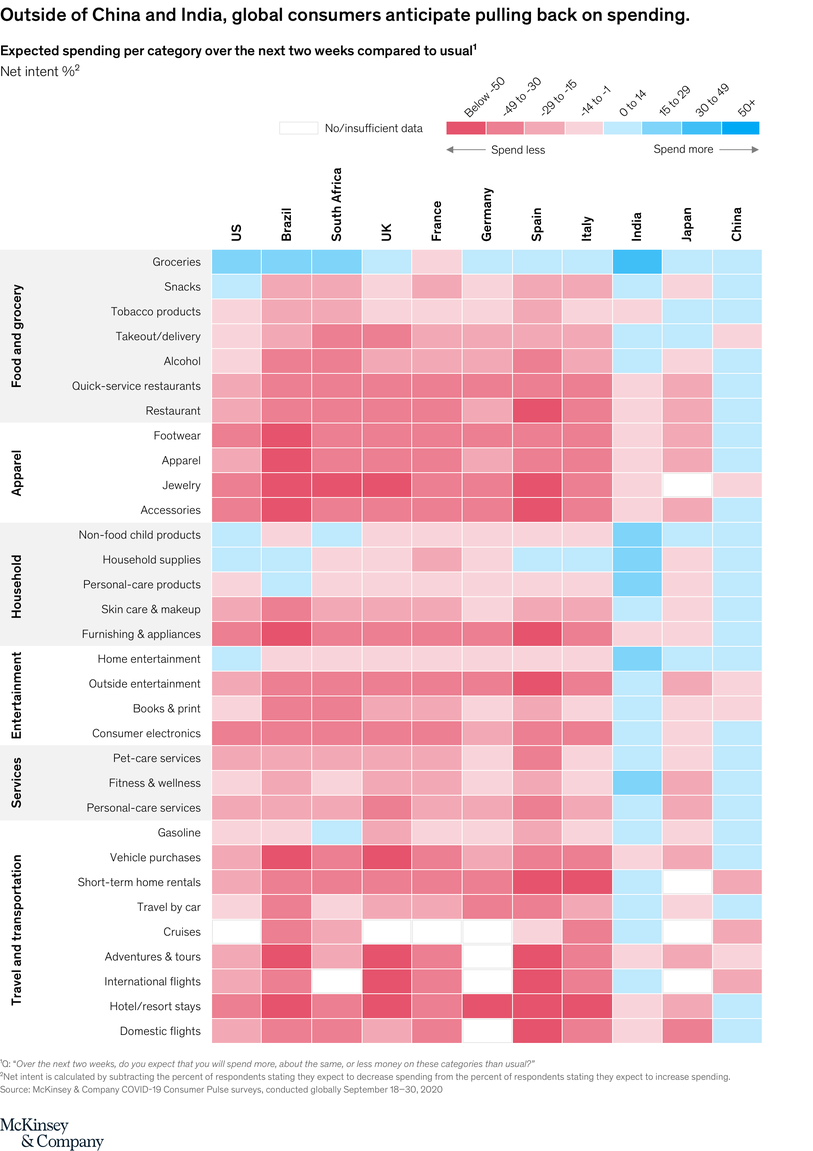 Time is of the essence

According to the Organization for Economic Development (OECD), while global GDP should rise by around 4¼% by the end of 2021, national bounce-back could be uneven. In its December Economic Outlook, the OECD observes that it is the countries with effective track and trace systems and rapid deployment of vaccines which will perform most strongly.

More than 30 countries have begun immunizing vulnerable citizens against COVID-19 – some at faster rates than others. Israel, for example, has already vaccinated over 20% of its population.

India – which makes about 60% of the world’s vaccines, including the Oxford/AstraZeneca vaccine – is planning to immunize around 300 million people by July. The Serum Institute of India (SII) has also agreed to produce millions of doses of COVID-19 vaccines for low- and middle-income countries as part of the COVAX programme, which aims to give equal vaccine access to all. 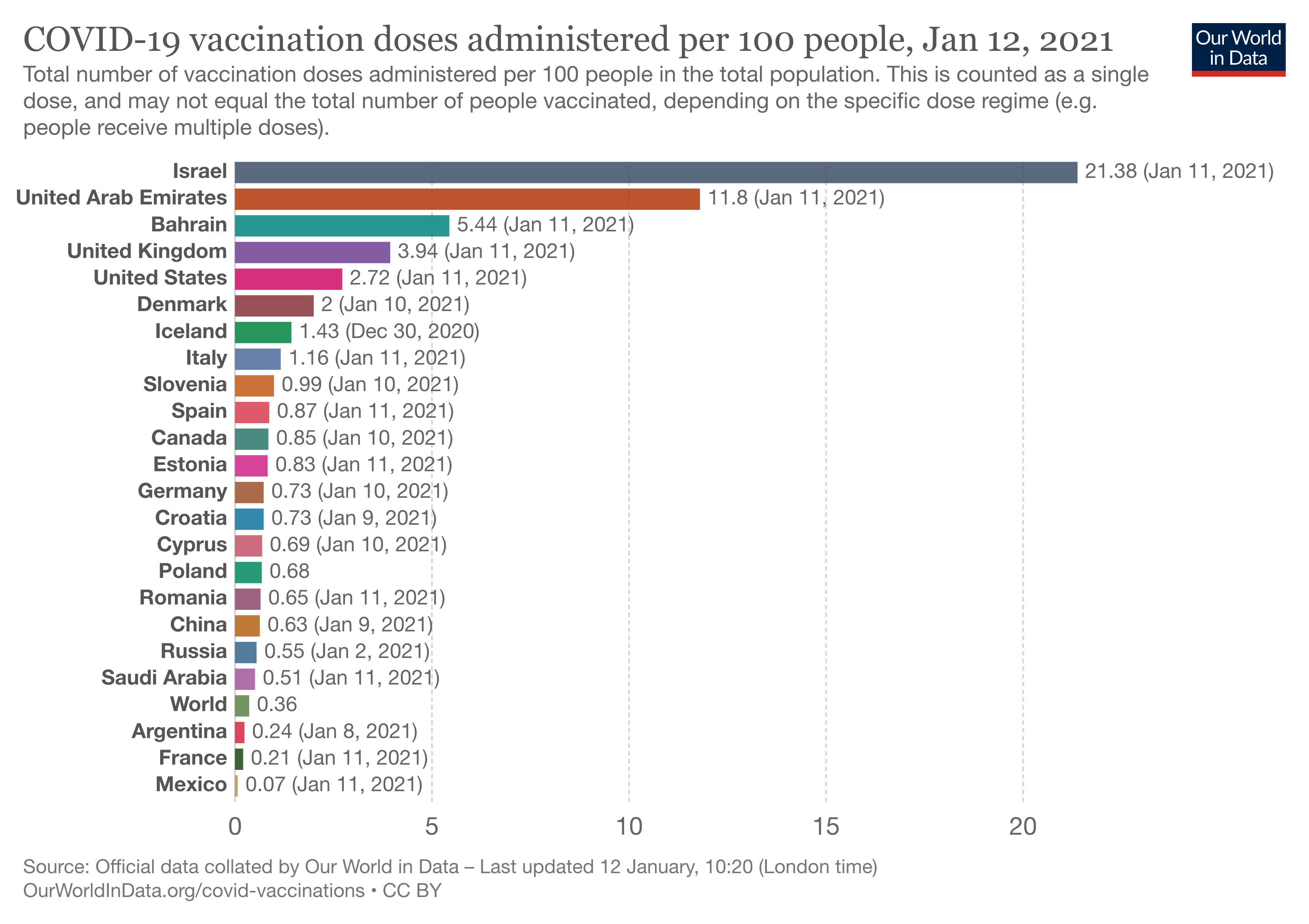 Israel is significantly ahead of other countries in its vaccine rollout. Image: Our World in Data

“No country, rich or poor, should be left at the back of the queue when it comes to COVID-19 vaccines,” Dr Seth Berkley, CEO of Gavi, the Vaccine Alliance, said in an SII release in September 2020.
Source: World Economic Forum