These are the top 10 countries that produce the most wheat 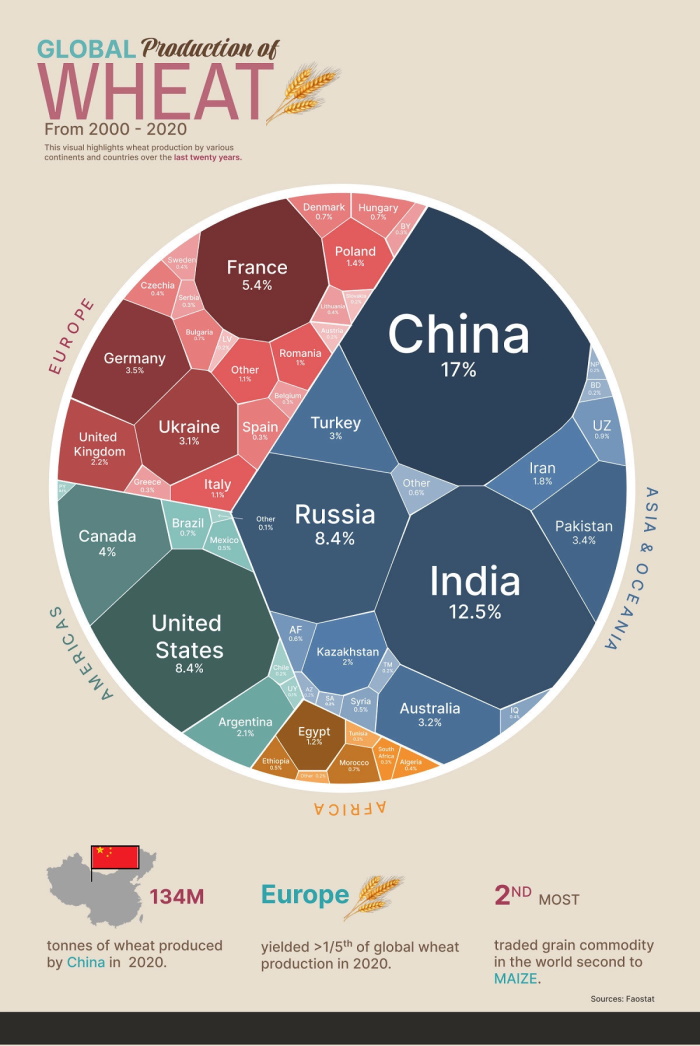 Wheat is a dietary staple for millions of people around the world.

After rice and corn (maize), wheat is the third most-produced cereal worldwide, and the second-most-produced for human consumption. And considering wheat’s importance in the global food system, any impact on major producers such as droughts, wars, or other events, can impact the entire world.

Which countries are the largest producers of wheat? This graphic by Kashish Rastogi visualizes the breakdown of 20 years of global wheat production by country.

Top 10 Wheat Producing Countries
While more than 80 different countries produce wheat around the world, the majority of global wheat production comes from just a handful of countries, according to data from The Food and Agriculture Organization of the United Nations (FAO).

Here’s a look at the top 10 wheat-producing countries worldwide, based on total yield in tonnes from 2000-2020: 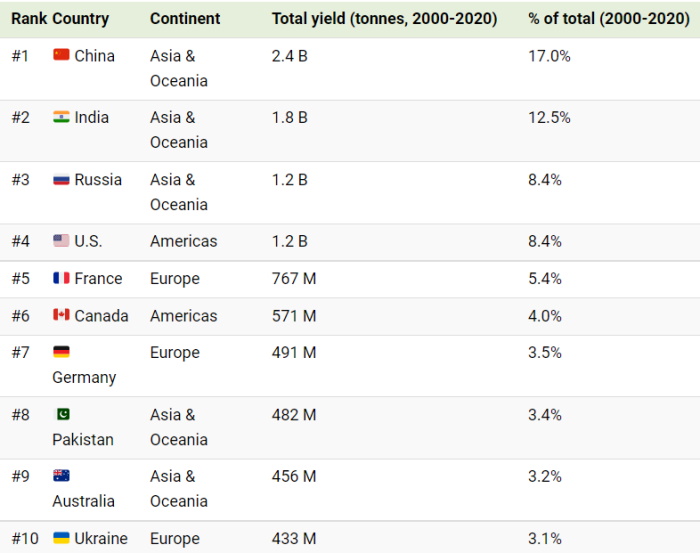 China, the world’s largest wheat producer, has yielded more than 2.4 billion tonnes of wheat over the last two decades, making up roughly 17% of total production from 2000-2020.

A majority of China’s wheat is used domestically to help meet the country’s rising food demand. China is the world’s largest consumer of wheat—in 2020/2021, the country accounted for approximately 19% of global wheat consumption.

The second-largest wheat-producing country is India. Over the last two decades, India has produced 12.5% of the world’s wheat. Like China, India keeps most of its wheat domestic because of significant food demand across the country.

Russia, the world’s third-largest wheat producer, is also the largest global exporter of wheat. The country exported more than $7.3 billion worth of wheat in 2021, accounting for approximately 13.1% of total wheat exports that year.

Russia-Ukraine Impact on Global Wheat Market
Because Russia and Ukraine are both significant global wheat producers, the ongoing conflict between the two countries has caused massive disruptions to the global wheat market.

The conflict has had an impact on adjacent industries as well. For instance, Russia is one of the world’s major fertilizer suppliers, and the conflict has led to a global fertilizer shortage which could lead to food shortages worldwide.
Source: World Economic Forum