The latest report of the International Maritime Bureau (IMB) for the third quarter of 2020 showed a total of 132 incidents of armed robbery and piracy. In comparison to Q3 2019, this represented an increase of 10% in the total number of incidents for the same period.

The report recorded that 110 ships were boarded, two ships were hijacked, 12 ships experienced attempted attacks and six ships were fired upon. There were 134 cases of assault, injury and threats reported, of which 85 seafarers were kidnapped and 31 were held hostage onboard their ships. 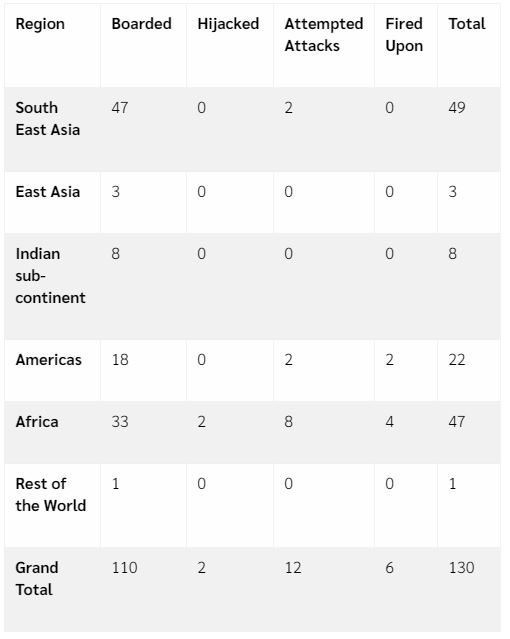 The IMB report showed that there has been an increase in the number of attacks in this region. In addition, they warned that incidents are being reported further and further away from shore whilst pirates are said to be better organised, armed and often violent. All ships transiting in these waters should follow recommendations and guidelines set out in BMP West Africa.

No incidents were reported around Somalia during the third quarter of 2020. The last three hostages who had been held captive in the region were released in August 2020. Nevertheless, the IMB urges ships to continue implement BMP5 as they transit through these waters.

The IMB report showed that there has been an increase of incidents in Brazil, Ecuador, Haiti and Peru. All ships are advised to maintain a vigilant watch and antipiracy measures when they are anchored or underway, particularly during river passages under pilotage. Ships have been fired upon in the past, with crew injured and taken hostage.

The recent report from the Regional Cooperation Agreement on Combating Piracy and Armed Robbery against Ships in Asia (ReCAAP) noted reported 75 incidents of piracy and armed robbery in Q3 2020, a 39% increase as compared to Q3 2019. Of the 75 incidents reported, the majority were of an armed robbery nature (71) as against just four piracy incidents.

In Singapore both the IMB and ReCAAP observed a rise in the number of armed robbery incidents within the Singapore Straits in Q3 2020 in comparison to Q3 2019. The majority of the incidents took place during hours of darkness, with knives reportedly used in at least 10 of the incidents. Ships are advised to remain vigilant and continue anti-piracy measures.

Meanwhile, there has been a decrease in the number of incidents in Indonesia and in the Philippines. In the latter archipelago, there have been no kidnappings by militants reported since March 2017. However, there has been an increase in attacks at Manila anchorage areas apparently as a result of the rise in the number of anchored ships in the Manila Bay area where the IMO has designated a green zone for crew changes due to Covid-19 pandemic. Most of the incidents occurred during hours of darkness with ship stores being stolen. Ships are advised to maintain strict anti-piracy measures while transiting these waters.