Strong underlying results and cash flow underpins continued net debt reduction
• Underlying replacement cost profit* was $3.3 billion, compared with $2.8 billion for the previous quarter. This result was driven by higher oil and gas realizations, higher refining availability and throughput enabling the capture of a stronger environment and a stronger gas marketing and trading result, partly offset by a higher underlying tax charge.
• Reported loss for the quarter was $2.5 billion, compared with a $3.1 billion profit for the second quarter 2021. This was driven by significant adverse fair value accounting effects* of $6.1 billion pre-tax, primarily due to the exceptional increase in forward gas prices towards the end of the quarter. Under IFRS, reported earnings include the mark-to-market value of the hedges used to risk-manage LNG contracts, but not of the LNG contracts themselves. This mismatch at the end of the third quarter is expected to unwind if prices decline and as the cargoes are delivered. The underlying result is adjusted to remove this mismatch.
• Operating cash flow* of $6.0 billion includes a working capital* build of $1.8 billion (after adjusting for inventory holding gains and fair value accounting effects).
• bp received $5.4 billion of divestment and other proceeds in the first nine months including $0.3 billion during the third quarter. bp now expects proceeds of $6-7 billion by the end of 2021.
• Net debt* fell to $32.0 billion at the end of the third quarter.
Further $1.25 billion share buyback planned – delivering on commitment to distributions
• bp is committed to the disciplined execution of its financial frame with a resilient dividend the first priority. For the third quarter bp has announced a dividend of 5.46 cents per ordinary share payable in the fourth quarter – unchanged following the 4% increase announced with second quarter results.
• With second quarter results, bp announced an intention to execute a buyback of $1.4 billion from first half 2021 surplus cash flow* of $2.4 billion. This programme was completed on 1 November 2021 with $0.9 billion executed during the third quarter.
• Taking into account the cumulative level of and outlook for surplus cash flow and subject to maintaining a strong investment grade credit rating, the board remains committed to using 60% of 2021 surplus cash flow for share buybacks and plans to allocate the remaining 40% to continue strengthening the balance sheet.
• Recognizing third quarter surplus cash flow of $0.9 billion and reflecting confidence in the outlook bp intends to execute a further buyback of $1.25 billion prior to announcing its fourth quarter 2021 results. bp expects to outline plans for the final tranche of buybacks from 2021 surplus cash flow at the time of such results.
• On average, based on bp’s current forecasts, at around $60 per barrel Brent and subject to the board’s discretion each quarter, bp continues to expect to be able to deliver buybacks of around $1.0 billion per quarter and have capacity for an annual increase in the dividend per ordinary share of around 4% through 2025.
• The board will take into account factors including the cumulative level of and outlook for surplus cash flow, the cash balance point* and the maintenance of a strong investment grade credit rating in setting the dividend per ordinary share and the buyback each quarter.
Continued momentum across our strategic focus areas
• In resilient and focused hydrocarbons, bp delivered its six-year programme of major project* execution, on average around 15% under-budget, hitting its target of bringing online 900 thousand barrels oil equivalent per day of new production by 2021. Six major projects have now come online in 2021, including two in the third quarter – Matapal, offshore Trinidad, under budget and ahead of its 2022 schedule, and Thunder Horse South Expansion Phase 2 in the Gulf of Mexico.
• Operational performance in resilient and focused hydrocarbons was robust. Relative to the second quarter, upstream* reported production rose by 4%, hydrocarbon plant reliability* increased to 95.4% and refining availability* increased to 95.6%.
• In convenience and mobility, bp delivered record year-to-date convenience gross margin*; strong growth in next-gen mobility, with 45% growth in electrons sold into EV charging compared to last quarter; and record year-to-date underlying earnings in China, a key growth market.
• In low carbon, confidence in bp’s 2025 target of 20GW developed renewables to FID* has been strengthened with a further 2GW added to the renewables pipeline* and Lightsource bp’s announcement of their increased 25GW development target for 2025. 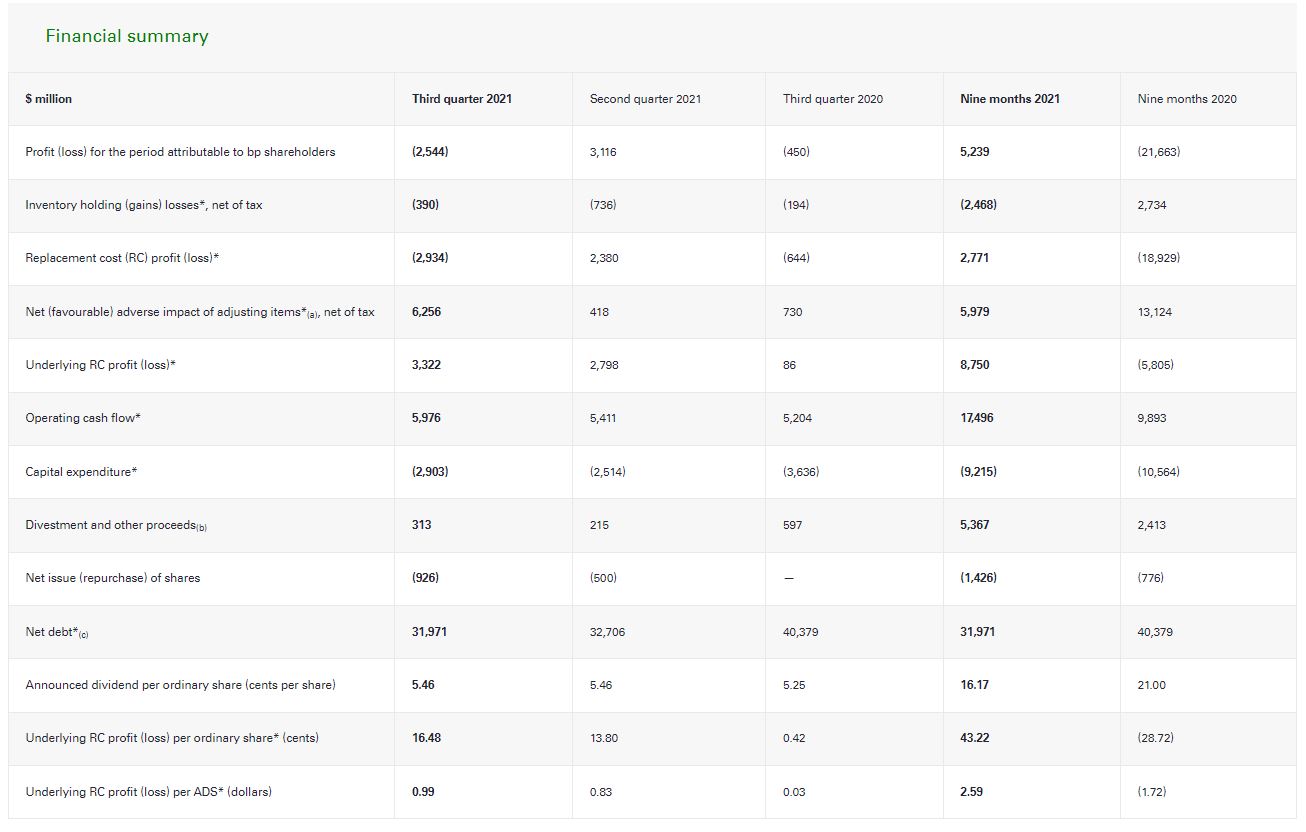 This has been another good quarter for bp – our businesses are generating strong underlying earnings and cash flow while maintaining their focus on safe and reliable operations. Rising commodity prices certainly helped, but I am most pleased that quarter by quarter, we’re doing what we said we would – delivering significant cash to strengthen our finances, grow distributions to shareholders and invest in our strategic transformation. This is what we mean by performing while transforming.
Bernard Looney,chief executive officer
(a) Prior to 2021 adjusting items were reported under two different headings – non-operating items and fair value accounting effects*. See page 30 for more information.

(b) Divestment proceeds are disposal proceeds as per the condensed group cash flow statement. Other proceeds were $675 million from the sale of a 49% interest in a controlled affiliate holding certain refined product and crude logistics assets onshore US in the nine months 2021, $481 million in relation to the sale of an interest in bp’s UK retail property portfolio in the third quarter and nine months 2020 and also $455 million in relation to TANAP pipeline refinancing in the nine months 2020. There are no other proceeds in the third quarter 2021.
Source: BP