Iron ore markets have been on a rollercoaster ride in recent days, tanking, then surging, before subsequently tanking again.

It’s been wild, and that’s saying something given the large daily swings seasoned watchers have become accustomed to.

While the skittish price action of late suggests that prices may be trying to find a base after a prolonged decline from late February this year, trying to establish what exactly has driven the price action is, as ever, unclear.

What, in the space of one weekend, can see sentiment switch so dramatically from one direction to another?

Vivek Dhar, mining and energy analyst at the Commonwealth Bank, has been brave enough to put forward his theory, suggesting the latest plunge overnight was driven by weaker steel prices and softening demand for iron ore.

“The downturn was triggered by a fall in steel prices, which saw Chinese steel mills remain out of the market,” he says.

Along with seasonal factors, he also notes that after buying heavily on Friday, iron ore demand from Chinese steel mills also did an abrupt about-face.

“Steel mills were also reportedly more concerned with paying off quarterly debts than procuring additional iron ore. Restocking demand, which was cited as a key driver for higher iron ore prices on Friday, appeared to dry up yesterday,” he says.

On Friday, the spot price for benchmark 62% fines jumped 3.25% to $57.79 a tonne, according to Metal Bulletin, partially reversing a 4.32% drop in the previous two sessions. 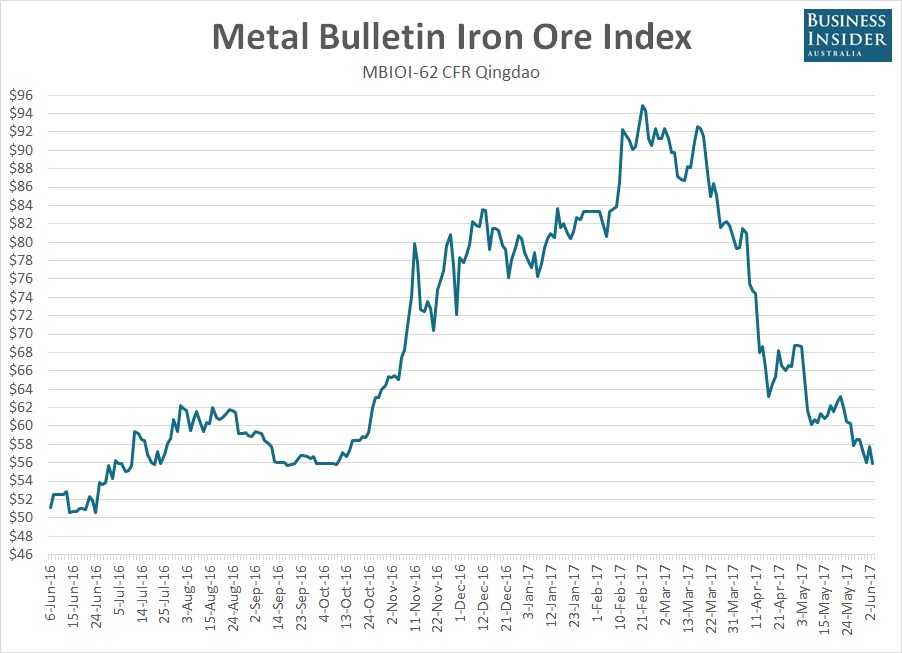 Wild, skittish, crazy – whichever way you describe it, the price has been all over the place.

While that is showing no signs of abating, the common denominator is China’s steel industry — the largest producer globally.