The safe-return-to-port function of Thordon Bearings’ TG100 emergency shaft seal has once again prevented a vessel from sinking following a catastrophic shaft failure.

The crew of the MM Transportation-operated Jennifer S, a 17m (56ft) long workboat operating on the Ohio River, near Rockport, Indiana, activated Thordon’s secondary inflatable emergency seal when the tailshaft was pulled out of the coupling, damaging the TG100’s primary aft shaft seal.

On the evening of February 3rd 2020, the Jennifer S was towing a dredge when the starboard shaft line became entwined with a buoy’s wire rope, forcing the shaft from the hub at the gearbox. This, in turn, resulted in the aft shaft nut at the wheel hitting the rudder when in the full ahead position causing the shaft to slide even further aft.

Jason Perry, Thordon’s Business Development Manager, USA, said: “When steering became stiff, the crew went down to the engine room and noticed water gushing in up to the deck plates. They immediately activated the TG100’s emergency seal, which prevented further water ingress.” 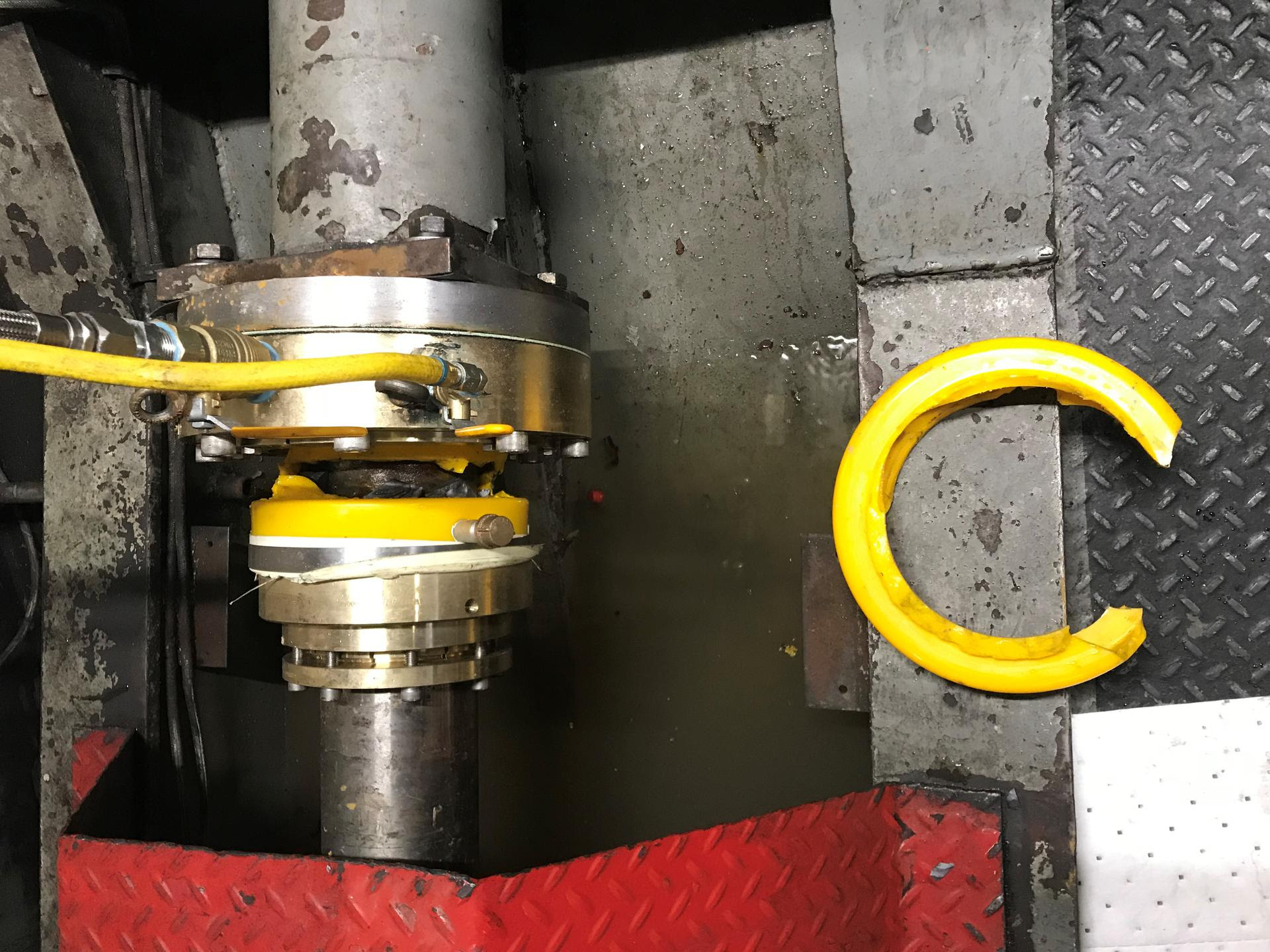 The original TG100 seal that saved the vessel from sinking

When the vessel was inspected, port engineers found that the shaft had come loose from the coupling, slamming into the entire rotating assembly and damaging the TG100 seal’s silicon carbide faces, which in turn cut a 25.4mm (1in) split all around the bellows.

“Had this vessel not been installed with Thordon’s emergency seal technology, the vessel was likely to have sunk,” said Perry.

Scott Groves, Thordon Bearings’ Regional Manager, Americas, furthered that the emergency function helped keep the seal’s taper lock (wedge ring) in position on the shaft, preventing the vessel’s shaft from completely sliding out of the vessel. 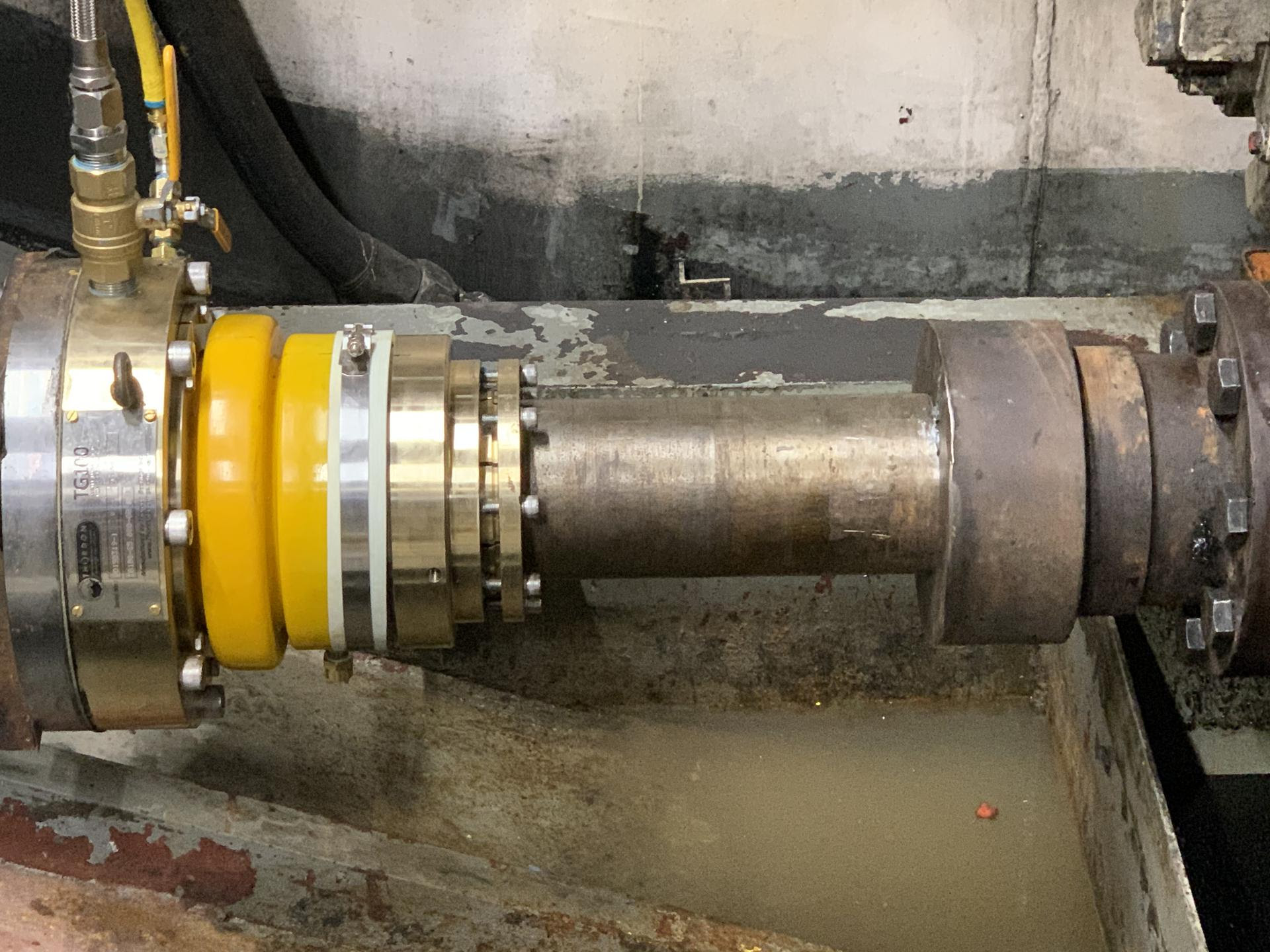 “We are extremely confident that no other shaft seal currently available is able to prevent complete seal failure in such a scenario. I have my doubts as to whether a conventional seal would have responded as well as the TG100 in such circumstances. Certainly, standard clamp rings with a set screw would have been unable to hold position when the shaft seal was so heavily damaged,” he said.

Thordon’s tapered lock/wedge ring tightens to the shaft under forward forces to maintain compression of the bellows on the shaft, even if the entire assembly is damaged or the tailshaft retracts.

“Everyone onboard was safe, dry, and went home to their families that night,” said Perry.

Thordon’s US Inland Waterways team arrived at the port and a new TG100 seal was installed on February 6th 2020.

Jeff Hall, Drydocking Manager, MM Transportation, said: “We received excellent service from Thordon who helped reinstall a new TG100 seal and replaced the silicon carbide faces on the port seal, which were also damaged when the shaft came loose. We have the seals on two other workboats and will definitely be installing the same system on others. The TG100 seal saved our boat.”

A similar incident occurred last year when the crew of a 2002-built twin-screw workboat activated the TG100’s secondary seal after suffering catastrophic shaft failure in the Mississippi River north of New Orleans. This vessel was the very first workboat to be fitted with a TG100 seal, in 2011.

Commenting on the success of the TG100 seal, Craig Carter, Director of Marketing & Customer Service, said: “The TG100 has an excellent performance record with hundreds of units now in service. It really is an important component to vessel safety, protecting not only the lives of the crew but also the vessel.”
Source: Thordon Bearings