Three reasons why maritime transport must act on climate change

For years, the transport sector has been looking at solutions to reduce its carbon footprint. A wide range of stakeholders has taken part in the public debate on transport and climate change, yet one mode has remained largely absent from the conversation: maritime transport.

Tackling emissions from the shipping industry is just as critical as it is for other modes of transport. First, international maritime transport accounts for the lion’s share of global freight transport: ships carry around 80% of the volume of all world trade and 70% of its value. In addition, although shipping is considered the most energy-efficient mode of transport, it still uses huge amounts of so-called bunker fuels, a byproduct of crude oil refining that takes a heavy toll on the environment.

Several key global players are now calling on the maritime sector to challenge the status quo and limit its climate impact. From our perspective, we see at least three major reasons that can explain why emissions from maritime transport are becoming a global priority.

If the shipping industry was a country of its own, it would rank as the 6th largest greenhouse gas (GHG) emitter worldwide, right between Japan and Germany. While the sector’s share in global emissions is currently at 2-3%, the demand for maritime transport is soaring – and so are emissions. From 2015 to 2016 alone, the slowest year in more than a decade, the world’s fleet still grew by more than 3.5%. The result of this trend? Under a business-as-usual scenario, the International Maritime Organization (IMO) estimates that carbon emissions from shipping could increase by 50%-250%. 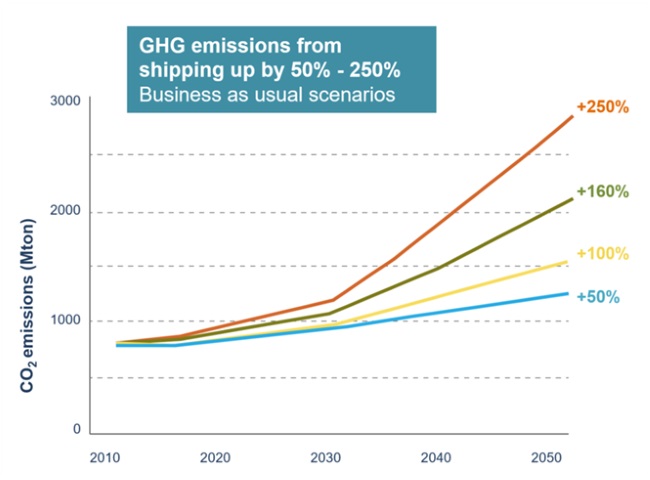 2. All hands on deck – the imperative of fairness

Neither international aviation nor international shipping were part of the climate change targets set under the Paris Agreement. As a consequence, these two specific industries were the only ones not included in any of the national climate action plans submitted by countries after the Paris agreement, often referred to as Nationally Determined Contributions.

Things finally started moving in 2016, when the International Civil Aviation Organization (ICAO) adopted its Carbon Offsetting and Reduction Scheme for International Aviation (CORSIA) to address carbon emissions from international flights. If the shipping sector does not follow suit quickly, its carbon emissions are forecasted to make up 10%-17% of global GHG emissions by 2050, posing a significant threat to the Paris Agreement’s goal of keeping global warming well below 2°C.

From a political standpoint, holding major emitters like the shipping sector accountable is also tremendously important to the overall success of climate action: If powerful industries are not required to do their due diligence, how can we expect poor and vulnerable countries to understand that they, too, should be taking action? And how can we expect certain transport modes to act pro-actively on climate when others are exempt from any obligations?

3. Setting sail – the window of opportunity

Pressure on the international maritime industry to take action has been increasing in recent years. For instance, in February 2017 the European Parliament voted in favor of including shipping in its EU Emissions Trading System from 2023, unless the IMO proposes comparable climate regulation on its own. Within this context, the IMO has committed to adopt an initial GHG emissions reduction strategy in April 2018, the year when the United Nations Framework Convention on Climate Change will also conduct its first global stock-taking exercise to measure progress on climate action. This will be followed by a revised IMO strategy in 2023. As the momentum builds, there is a clear window of opportunity to create a greener future for international maritime transport.

The World Bank is part of two global initiatives that have recently joined forces to support the shipping industry on this journey: the Sustainable Mobility for All and the Carbon Pricing Leadership Coalition, whose work on maritime emissions is led by the University College London Energy Institute and the Global Maritime Forum. Building an alliance of progressive maritime stakeholders to explore, discuss, and evaluate the potential of possible emissions reduction strategies is key. As Roman philosopher Seneca once said: “If one does not know to which port one is sailing, no wind is favorable.”
Source: The World Bank