Alpha, Delta, Omicron… the year that is now coming to an end has us wondering whether we will indeed exhaust all the letters of the Greek alphabet in naming new variants of the infectious disease. Well, we would certainly hope not.

In any case, 2021 has offered an admittedly interesting ride for dry bulk stakeholders and industry players and, for one thing, kept us all on our toes. What 2022 has in store for all of us is anyone’s guess, but we can attempt an informed projection as to what we can expect after we return to the usual January’s blues following a festive period with warm hearts and full bellies.

A sweet and sour cocktail for iron ore

In the first eleven months of the year, China imported a total of 1.04 billion mts of iron ore, which is still an incredibly high volume, but also a 3.2% decrease from the same period last year.

Indeed, the iron ore cargo flow into China has been extraordinary and has heavily supported the freight rates for Capesize bulkers which conquered a 13-year high, being the main vehicles that transport the commodity. This enjoyable ride, however, eased quite abruptly when in the recent months China reduced infrastructure investments and imposed forced cuts into its domestic steel production: this has effectively led the red alloy’s price to hit an 18-month low in early December (around US$90/t), although the price is now hovering in excess of the US$110/t mark.

To understand the iron ore fundamentals and whether they are going to work in favour of the dry bulk freight market in the coming year or not, we would need to look at the reasons why China moved forward to scale back its domestic crude steel output in 2H21: this was basically driven by the country’s efforts to tame demand for iron ore, control its, by then record high, price as well as meet its annual emissions reduction targets by year-end. 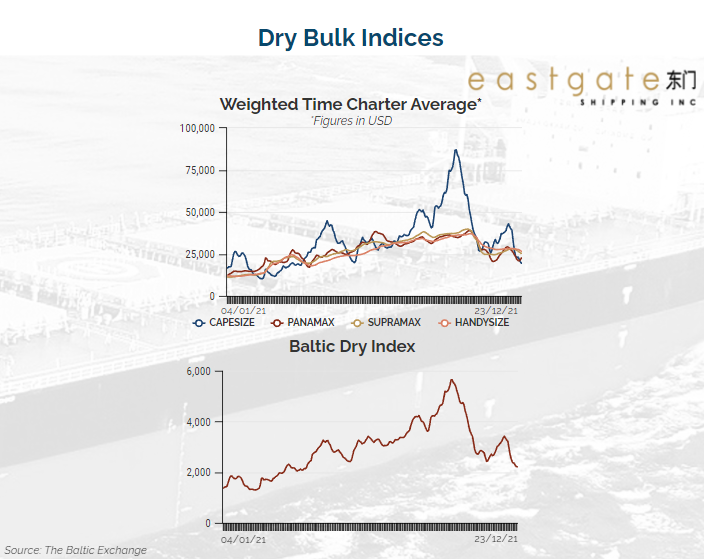 The effort to reduce pollution ahead of the Winter Olympics in February 2022 has also played its part in weakening demand for steel and ore. Furthermore, the Asian nation’s recent power supply crisis naturally affected manufacturing activity. All these factors will recede by 2Q22 and, perhaps, eventually boost iron ore demand.

On the other end, China’s struggling property sector and the indebted giant Evergrande (officially now a defaulter for the first time) can mean either one of two things: the construction activity (that consumes about a third of the domestic steel output) will be much lower in 2022 or China will again resort to feeding its economy with more government funding. Still, forecasts for China’s iron ore imports over the next year remain positive (up nearly 3% y/y) but this saga of high-risk factors that are going to affect the commodity’s supply and demand fundamentals does not allow for much speculation. 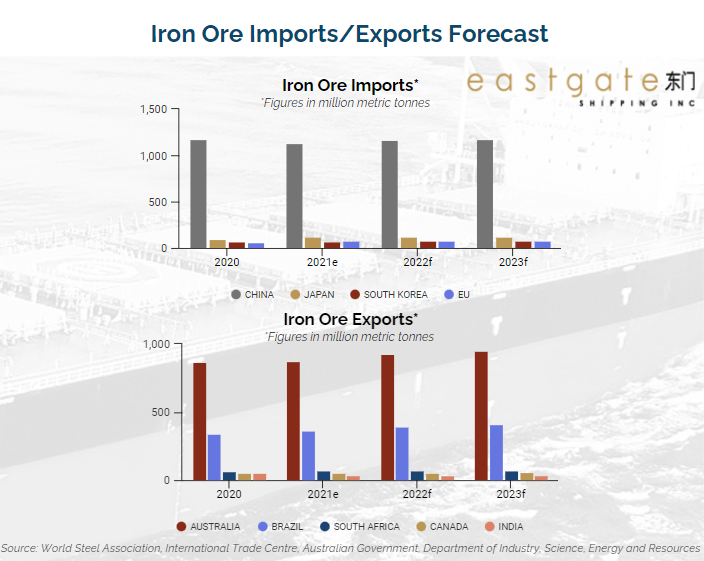 The energy crisis in tandem with power shortages across China and India, the world’s two largest thermal coal consumers, triggered demand for coal imports which consequently assisted freight rates for vessels operating in the region.

China’s thirst for coal is also reflected in the fact that the Chinese government not only instructed domestic mines to up their production “at all costs” but proceeded to allow some Australian coal cargoes to clear customs; although we think these have been isolated cases as the ban on Australian coal still stands, they are however indicative of China’s pressing need for the fossil fuel.

Global economic recovery and a cold winter in the Northern Hemisphere combined with high gas prices and limited renewables capacity that is not yet there to take any significant proportion in the energy supply mix away from coal, have all worked in favour of the dirty fuel. While the pace of the world’s coal’s demand growth is expected to slow down following the strong rebound in 2021, the International Energy Agency estimates that it will reach an all-time high by 2024 with China playing, again here, a decisive part in this upward trajectory.

With gas price futures remaining relatively high until 2024, it is logical to anticipate that coal will maintain its lion’s share in the global energy mix. Aside from some very reasonable concerns regarding emissions reduction and decarbonisation objectives, the augmented demand for coal-fired power generation is good news for the dry bulk freight market which, still, relies quite heavily on the cargo volume of the fossil fuel.

And although China has set the ambitious net zero target by 2060, current reality is far from that. Infrastructure is not there to seriously support alternative energy sources and China keeps investing in new coal plants, domestically and overseas. Estimates for 2022 suggest that China’s thermal coal imports will remain flat y/y (circa 258million mts), while India’s imports next year are expected to grow by 8.5% to 164 million mts. 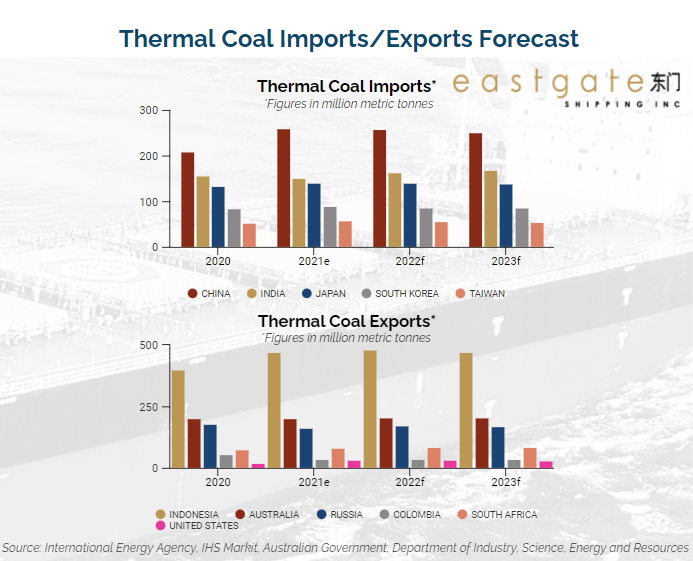 As we have stressed plenty of times in the past, the feed needs of the world’s most populous nation in the world are relatively inelastic and as such have not been much affected by the extensive lockdowns (as opposed to the manufacturing activity and metals demand which were indeed dampened in the past).

China’s demand for grains has been somewhat consolidated over the past few years, especially so following the recovery of its swine population post-ASF. And although the pace of US grain exports in 4Q21 indeed slowed due to the logistics disruptions caused by Hurricane Ida and grain shipments ex Black Sea also eased, impacted by the Russian export wheat tax, projections for next season’s grain imports remain optimistic.

The longhaul grain trade generously improves the tonne-mile demand for the medium and smaller asset classes (Panamax and Supramax) and the positive soy imports/exports forecast for next year in the key Brazil/China route adds a bright note to the earnings expectations for the medium-sized bulkers. It is no secret that the Chinese government has as key priority to secure food supplies amid pandemic disruptions and generalised uncertainty, and that is a tune we expect to keep listening to during the course of 2022.

Brazil expects to have an early harvest next year which can mean grain cargoes will be put in the market relatively early in Q1. But we do maintain our reservations regarding the actual supply of the commodity since dryness in South Brazil points to smaller soy and corn crops this season. Still, Brazil’s soybeans exports during 2021/22 are projected to improve by 15% y/y to 94 million mts, somewhat offsetting the lower export outlook for US: down nearly 10% to 56 million mts. 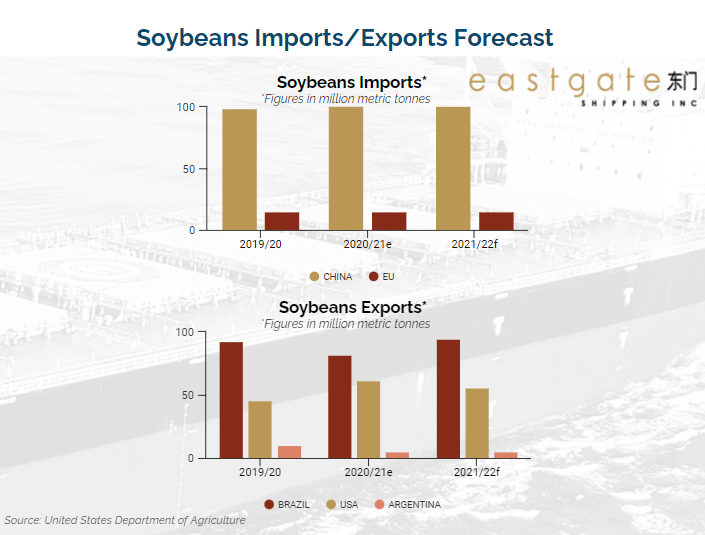 High volatility the theme for 2022

As the world still struggles with various covid waves and health-related complexities, the dry bulk freight market still rides high waves. The combo of pandemic-induced disruptions, quarantine measures, supply chain constraints, geopolitics, port congestion, tight tonnage supply and elevated demand for key commodities, has led the market to hit new highs in the past year and is also to blame for heightened volatility these past few months.

Going forward, the macro picture remains cautiously positive. The low orderbook (circa 7% of the existing fleet in deadweight terms) in tandem with world’s total dry bulk fleet expected to grow mildly in 2022 (by a gross 3%) essentially mean that it is indeed probable for demand to outstrip supply. Especially so if the Omicron variant plays out in a way that port disruptions tie more ships to congestion and, therefore, reduce spot supply.

There is no doubt that China will remain at the forefront of news and a lot will depend on its monetary policies that tend to have a domino effect in an array of key metrics that directly influence the dry bulk market. We certainly think that the New Year that is fast approaching will bring positive sentiment for the dry market but we also have to point out that we are bracing ourselves for higher-than-usual volatility which will require particular intuition and sharp reflexes from all market participants.
Source: Eastgate Shipping