Christian Ness succeeds industry veteran Per Kjellin as part of a planned generational change. Kjellin will continue working for TMC as advisor in the company’s business development team. He will also join the company’s board of directors.

TMC has built up a global market leader position as supplier of marine compressed air systems globally. The company’s systems have been designed solely for marine and offshore use, making it a firm favourite amongst companies operating in a marine environment. Local presence in key regions coupled with 24-hour service availability and 48-hour delivery guarantee to any airport worldwide have further strengthened its market position.

“This is a well-run business so my mandate is to manage the excellent foundation that is already in place, but also to identify new and innovative ways of enabling the marine and offshore industries to become more sustainable from both an environmental and cost perspective,” says Christian Ness, CEO of TMC Compressors. 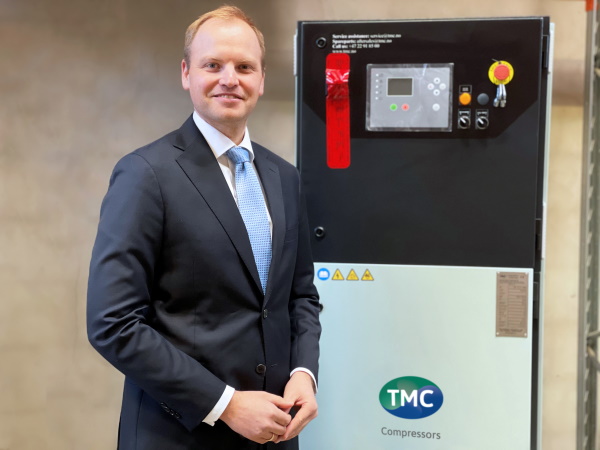 TMC is an industry pioneer within the development of energy-saving compressors. The company’s Smart Air compressors, for example, offer up to 50 percent energy savings compared to conventional compressors, with associated reductions of operating costs and harmful emissions to air.

“TMC has always believed that the supplier industry should play a key part in developing green technologies that can help drive down shipowners’ and operators’ lifecycle costs and help reduce the shipping and offshore industries’ climate footprint. We will continue our technology development along this path,” says Christian Ness.

Ness joins TMC from a position as managing director of TMC’s parent company, Nessco Holding. Prior to this, he was managing director for Nessco AS, a Norwegian supplier of compressors, vacuum pumps, blowers and associated services. Ness has also spent seven years at TMC in the past, in various roles including chief operating officer and operations manager.