The world’s largest LNG bunker vessel has been officially named at a ceremony held today in Rotterdam. The 18,600-m³ GTT Mark III Flex membrane vessel has been named “Gas Agility”. 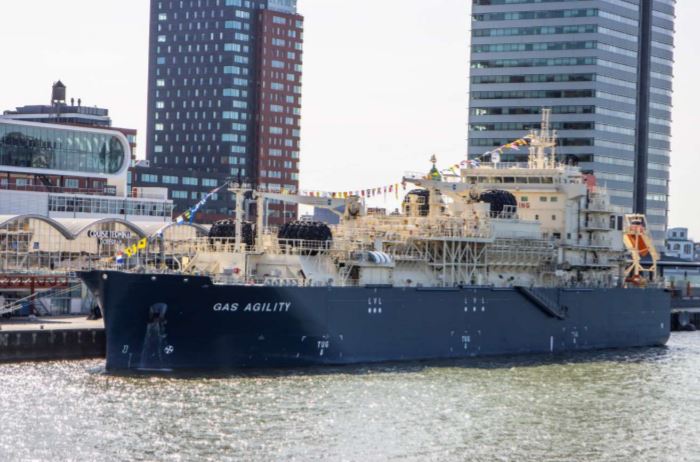 In February 2018, TMFGS and MOL signed the Time Charter Party for this epoch-making LNG bunkering vessel*. Construction started in China in November 2018 at Hudong-Zhonghua Shipbuilding’s yard. Delivered in April 2020, the “Gas Agility” meets the highest technical and environmental standards, using LNG herself as propulsion fuel, and integrating a complete re-liquefaction of the boil-off gas.

“We are delighted to have officially named ‘Gas Agility’ as she embarks on a new chapter in delivering cleaner marine fuels. Her arrival in Rotterdam marks the culmination of 3 years of dedicated work with MOL and Hudong-Zhonghua Shipbuilding in Shanghai, to plan, build and create a major development in global marine LNG fuel supply,” said Jérôme Leprince-Ringuet, Managing Director of Total Marine Fuels Global Solutions. “ ‘Gas Agility’ is a clear demonstration of our ongoing drive to develop key logistical LNG infrastructures in the main bunkering hubs around the world, helping the shipping industry make the move to a more sustainable fuel solution,” he added. 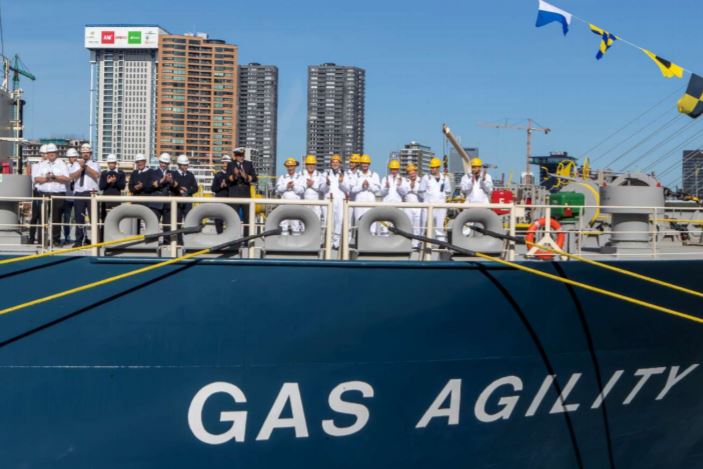 With her pioneering design and innovative equipment, the “Gas Agility” is an industry premiere made possible by a strong collaboration between the shipyard, the owner, the charterer and many partners, including Bureau Veritas and GTT.

“I would like to express my sincere gratitude to all the people who have been involved in the project. I am very confident that our endeavour will be the great milestone and the turning point in this rapidly changing world. The transition from heavy fuel oil to LNG is competitive, environmentally efficient and an immediately available solution for maritime transportation. By providing the capacity to deliver LNG as a marine fuel, this partnership will be the leader in transition to a more fuel-efficient industry,” said Takeshi Hashimoto, Representative Director and Executive Vice President of MOL.

In December 2019, TMFGS and MOL signed a long-term charter contract for a second large LNG bunker vessel, to be delivered in 2021**. She will be positioned in the Marseille-Fos area in France to supply LNG as a marine fuel within the Mediterranean area.

LNG as a marine fuel has gained positive momentum as the global shipping industry looks to adapt to stricter emissions standards.