TRACIT and UNCTAD Raise the Bar Against Illicit Trade

Yesterday, the Transnational Alliance to Combat Illicit Trade (TRACIT) and the United Nations Conference on Trade and Development (UNCTAD) co-hosted a meeting on the negative impact of illicit trade on the UN Sustainable Development Goals (SDGs).

The special UN dialogue exposed where and how progress on the SDGs is inhibited by illicit trade in some of the world’s most important economic sectors.

“From smuggling, counterfeiting and tax evasion, to the illegal sale or possession of goods, services, humans and wildlife, illicit trade is compromising the attainment of all 17 of the UN SDGs,” stated TRACIT Director-General Jeffrey Hardy. “It is crowding out legitimate economic activity, depriving governments of revenues for investment in vital public services, dislocating millions of legitimate jobs and causing irreversible damage to ecosystems and human lives.”

The intergovernmental meeting was designed to help governments understand the challenge of illicit trade and to consider policy measures that account for the negative impacts of illicit trade on the SDGs. During the meeting, TRACIT launched a report, Mapping the Impact on the Sustainable Development Goals of Illicit Trade, which maps the 17 UN SDGs against the following sectors: agri-foods, alcohol, fisheries, forestry, petroleum, pharmaceuticals, precious metals and gemstones, pesticides, tobacco, wildlife and all forms of counterfeiting and piracy. 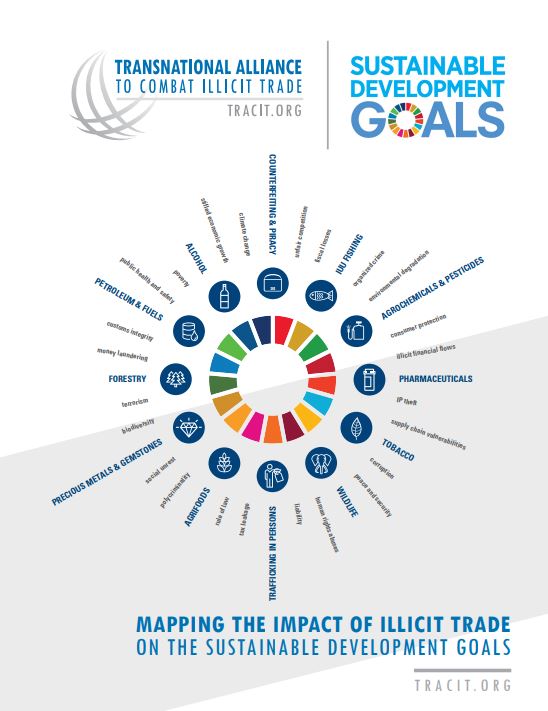 “The report shows that socio-economic impacts of illicit trade present significant deterrence to SDGs,” said Mr. Hardy. “This is holding back progress, increasing costs and pushing achievement of the goals further away.”

The meeting was attended by government officials representing countries from all regions of the world and featured a keynote presentation from Ambassador H.E. Silvia Elena Alfaro Espinosa, Permanent Representative of Peru to the UN Geneva. “International crimes across borders cannot be fought alone,” said Ambassador Alfaro. “The goals, the crimes and the solutions are interconnected so we need all countries to join efforts.”

Ambassador H.E. Taonga Mushayavanhu, Permanent Representative of Zimbabwe also provided keynote remarks on the state of illicit trade in his country. “Illicit trade is a common problem in most developing countries,” he said. “UNCTAD and TRACIT must devise proper intervention measures to help countries develop action against illicit trade.”

Speaking on behalf of the private sector, Ms. Monica Ramirez, Global Director, Regulatory & Public Policy, Anheuser- Busch InBev, explained how illicit trade constrains government tax collections, precludes employment opportunities and presents health and safety risks to consumers. “It’s important to help governments better understand the problem through more knowledge and raising awareness,” said Ms. Ramirez. “We are committed to be a progressive and effective partner with governments and society, and we have a responsibility to support SDGs in an effective way.”

“Today’s discussion and this important report are just the beginning of our joint initiative to unite IGOs, NGOs and the private sector to fight illicit trade,” concluded Pamela Coke-Hamilton, Director, Division on International Trade and Commodities, UNCTAD. “Currently, no fewer than twenty intergovernmental organizations tackle this issue, largely on a sector or subject basis, and we must connect our initiatives to make a significant impact.”
Source: TRACIT