Trump Says Europe to Buy Boatloads of U.S. LNG. Don’t Bet on It

President Donald Trump’s vision of Europe becoming a “massive buyer” of U.S. liquefied natural gas is likely to crash into the reality that Russia is a cheaper supplier for now.

Europe is consuming record volumes of the fuel delivered by pipelines from its traditional and geographically closer partners, Russia and Norway. Production has been increasing in both of those countries, and the government in Moscow has been promoting vast fields in Siberia that can ship to Europe at a lower cost than the U.S.

On top of that, Asia, which buys almost three-quarters of global LNG, lures most of the super-chilled fuel from global plants, including in the U.S. Europe in turn may see slowing gas consumption in its power sector. Those factors will make it difficult for U.S. suppliers to get a major foothold in Europe, regardless of what Trump said after his meeting with European Union President Jean-Claude Juncker in Washington on Wednesday. 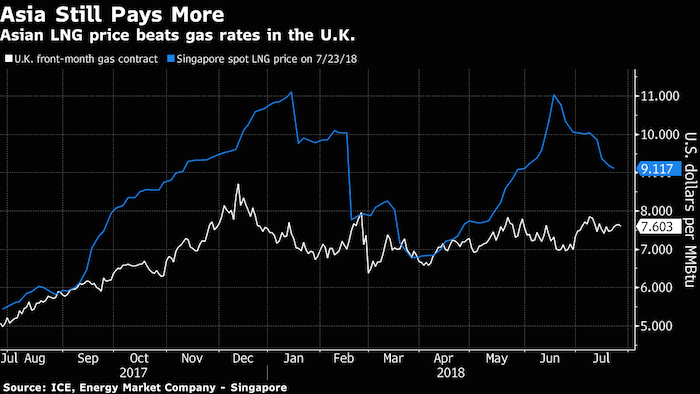 “It is interesting that we see talk from Trump of tariff-free, free-trade economics, yet in the same breath we see talk of Europe becoming a massive buyer of LNG when ultimately it is dictated by global prices,” said Nick Campbell, a director at Inspired Energy Solutions. 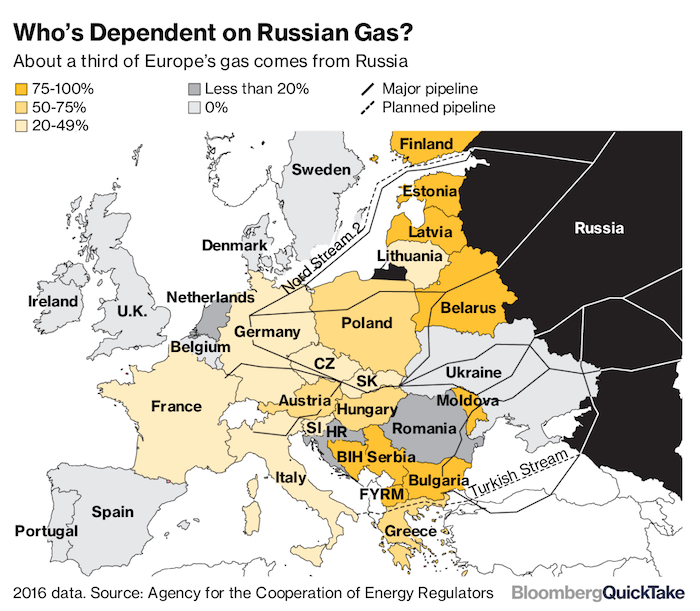 Europe’s response to the American LNG pitch has been lukewarm. Existing terminals on the continent are underused when it comes to imports for domestic consumption. European terminal regasification utilization rates averaged 27 percent last year, compared with 73 percent in China, which is acting on its pledges to battle air pollution and reduce coal use.

Supplies that arrive by pipeline from Russia and Norway are more competitively priced — and more abundant. The Russian pipeline monopoly Gazprom PJSC is confident U.S. LNG supplies to Europe “will never catch up with and will never surpass” Russian gas exports to the region, Chief Executive Officer Alexey Miller said in June. The chart below shows what gives him such confidence. 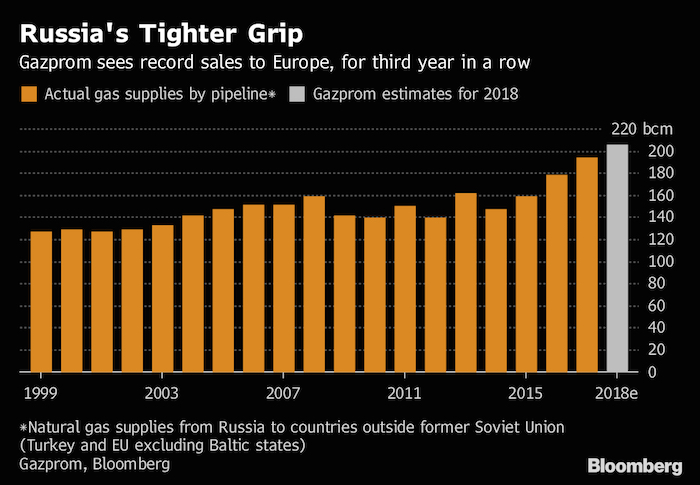 Russian President Vladimir Putin in May brushed off Trump’s challenge, calling him a “good and strong entrepreneur” while at the same time tightening his grip on the European market. The economics of the market are working in Putin’s favor.

The full-cost based breakeven price of U.S. LNG supplies to Europe stands now at $6 to $7.50 per million British thermal units. That compares with $3.50 to $4 for Russia’s pipeline gas based on Gazprom’s current taxation, according to estimates of Alexander Kornilov, an analyst at Aton LLC in Moscow.

If Europe’s spot price remains at current levels or grows, its market will drive more interest from North American suppliers, Kornilov said. However, Gazprom has repeatedly said that Russian gas is above any competition in the European Union due to its low production costs. Russia will “protect its turf at all costs” because it can undercut other suppliers and U.S. LNG will always be far more expensive, said Manas Satapathy, a managing director for energy at Accenture Strategy.

Russia isn’t the only threat to U.S. suppliers. Qatar is the world’s biggest LNG producer and the largest supplier of the fuel into Europe. Nigeria and Algeria also feed the market. In addition, Norway’s production has been expanding, with a network to ship the fuel by pipeline already well developed. 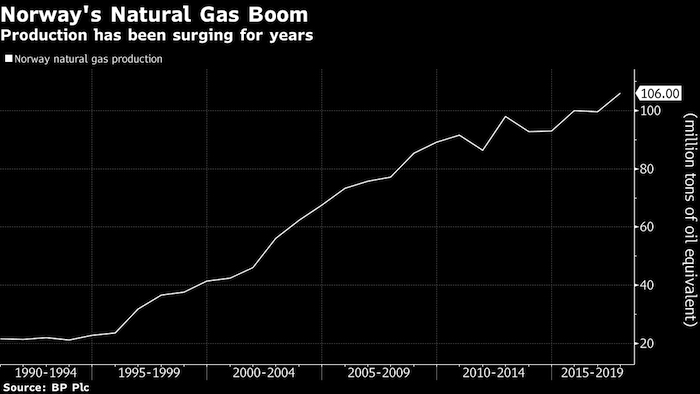 Another undercurrent that will blunt U.S. inroads: Climate change. The EU pushing hard to boost renewables and slash fossil fuel use. Germany and Britain aim to scrap coal entirely, and gas will become the target after that. While in the past officials talked about gas as a bridge fuel toward a greener future, they’re now starting to think about how to generate electricity without any emissions.

“Without the ‘gas bridge,’ Europe won’t see increasing demand for U.S. gas,” said Phil MacDonald, spokesman at London environmental lobby group Sandbag.
Until Juncker’s meeting with Trump, European officials have given an equivocal reception to the U.S. suggestion that its LNG is a solution to energy security concerns. German Chancellor Angela Merkel has defended the Nord Stream 2 project while also planning the nation’s first LNG import terminal, saying it wants to diversify suppliers.

Poland is more eager to take U.S. LNG. It signed deals last month to buy the fuel from Venture Global LNG Inc. and Sempra Energy. The Eastern European nation wants to turn to other sources of supply after its contract with Russia’s Gazprom expires in 2022.

Even so, the market for both gas and LNG is expanding. Some places like Spain and Portugal don’t have strong links with Russian pipelines and have ample LNG import capacity. Equally, no country wants to depend on just one source, giving the U.S. an opportunity to make sales.

“One thing to note is imports may increase naturally in due course as more projects in the U.S. come online and Australian projects serve Asia more easily as well as lower demand for LNG from Japan as it returns its nuclear reactors,” said Campbell at Inspired Energy. “Potentially Trump will get his way, but through structural changes in the sector rather than sheer force of personality.”
Source: Bloomberg

New UN initiative must be backed up by enforcement, says SRI