US President Donald Trump has said “trade wars are good”, amid controversy over his decision to impose tariffs on steel and aluminium imports.

He tweeted that the US was “losing billions of dollars on trade” and would find a trade war “easy to win”.

On Thursday he said steel imports would face a 25% tariff and aluminium 10%.

Canada and the EU said they would bring forward their own countermeasures. Mexico, China and Brazil have also said they are considering retaliatory steps.

When a country (USA) is losing many billions of dollars on trade with virtually every country it does business with, trade wars are good, and easy to win. Example, when we are down $100 billion with a certain country and they get cute, don’t trade anymore-we win big. It’s easy!

Critics argue that the tariffs would fail to protect American jobs and would ultimately raise prices for consumers.

The news sent shares down around the world on Friday, with Wall Street stock markets opening sharply lower.

‘We win big’
In a tweet early on Friday, Mr Trump said the US would “win big” in a trade war.

He later followed this up with further tweets, saying the US must “protect our country and our workers” and that the trade deficit left him with no choice on tariffs.

When a country Taxes our products coming in at, say, 50%, and we Tax the same product coming into our country at ZERO, not fair or smart. We will soon be starting RECIPROCAL TAXES so that we will charge the same thing as they charge us. $800 Billion Trade Deficit-have no choice!

The combative posts follow Thursday’s assertion on Twitter that US steel and aluminium industries had been “decimated” by trade policies.

“We must not let our country, companies and workers be taken advantage of any longer,” he said.

The US imports steel from more than 100 nations and brings in four times more steel from abroad than it exports.

Most countries believe that negotiations are best carried out and disputes settled through a rules-based system. Introducing trade barriers on a tit-for-tat basis has the potential to harm companies on both sides.

But that’s unlikely to bother Mr Trump. His campaign rhetoric drew heavily on the perceived threat to traditional US industries from foreign interlopers acting unfairly. He’s simply continuing in that vein.

And it’s unlikely to register much with the steelworkers of Pennsylvania and Indiana. Concerned about their jobs and the future, many will welcome Mr Trump’s comments. 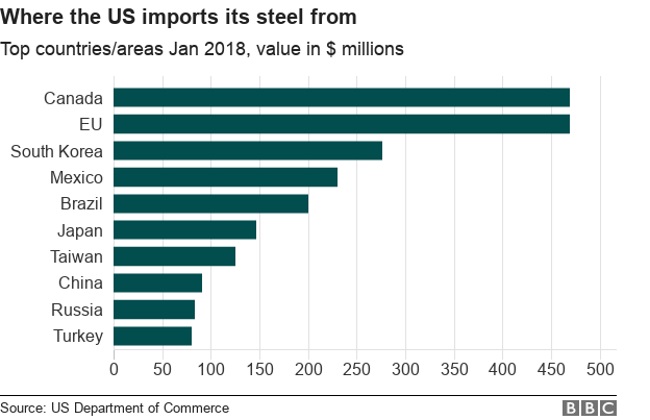 What has been the reaction?
Mr Trump’s tariff announcement has been met with international condemnation, at a time when the US is renegotiating the North American Free Trade Agreement (Nafta) with Canada and Mexico.

Roberto Azevedo, head of the World Trade Organization (WTO), said he was “clearly concerned” about Mr Trump’s plans, saying a trade war “is in no one’s interests.”

“The potential for escalation is real, as we have seen from the initial responses of others,” he said.

A spokesperson for 10 Downing Street said the UK is “engaging” with the US on what Mr Trump’s tariff announcement means in practice.

“We are particularly concerned by any measures which would impact the UK steel and aluminium industries,” the spokesperson said.

Speaking on BBC Radio 4, UK Steel’s head of policy Richard Warren said the announced move would have a “significant impact” if it went ahead.

French economy minister Bruno Le Maire meanwhile said there would “only be losers” in a trade war between the US and the EU.

Mr Le Maire did however also call for a “strong, coordinated and united response from the EU”.

“We will not sit idly while our industry is hit with unfair measures that put thousands of European jobs at risk,” he said.

China also condemned the move, with a Chinese foreign ministry spokesperson saying: “If all countries followed the example of the United States, [it] will undoubtedly result in a serious impact on the international trade order.”