There is a lot to unpack in President Donald Trump’s latest missive on the complex subject of oil prices and restrictive commodity agreements:

First, there’s the timing. I’m loath to read the president’s Twitter habits like the entrails of some unfortunate creature. But it sure feels like he gets antsy about oil when prices move up sharply, especially in the vicinity of $75 – $80 a barrel: 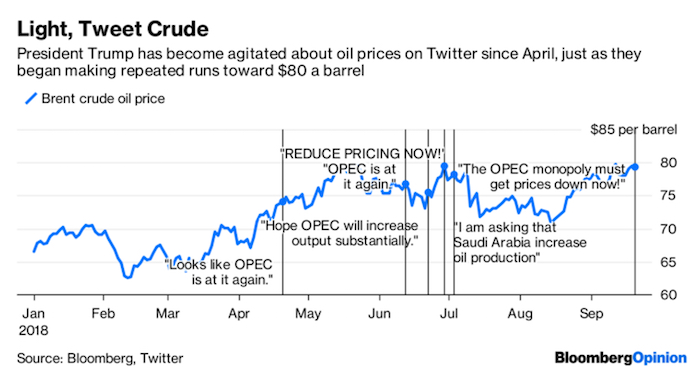 That this has coincided with the run-up to midterm elections — just 47 days away — probably hasn’t helped. The Cook Political Report lists 67 House races that are most competitive, leaning either Republican or Democratic or being toss-ups.Of these, no less than 64 last voted for a Republican representative. And, as I wrote here along with my colleague Elaine He, many of these races are in regions where voters tend to drive more than average and earn less than average, making higher pump prices a particularly sore point. It also probably doesn’t help that Trump is watching ever more of the president’s men being ensnared in Robert Mueller’s investigation and faces the potential unraveling of what had looked like a locked-down Supreme Court appointment.

And it really doesn’t help that the White House shares a large part of the responsibility for where oil prices are right now.

Despite the president’s repeated assertions, OPEC is not a monopoly and never has been. The fact it had to co-opt Russia in order to claw back some of the pricing lost in the recent crash is the surest sign of this.

And while the U.S. does protect some of the countries of the Middle East, Trump’s somewhat unpredictable approach to foreign policy means no ally can be as sure of the American-led order as they once were. Threatening those same countries with “we will remember” in the same tweet kind of exposes this.

Most importantly, the U.S. certainly doesn’t protect one Middle Eastern country in particular, Iran. Trump’s decision to pull out of the nuclear agreement with Tehran and reimpose sanctions is the single biggest factor behind oil’s current strength, with Iran’s oil exports having dropped by almost a third since April.

The other big supply shock roiling prices concerns Venezuela, where falling oil output is both a casualty and contributor in the country’s economic collapse. Trump has reportedly discussed potential military intervention there, which, given the recent history of such ventures, one imagines wouldn’t necessarily stabilize things. And forgive me if you know this already, but Venezuela isn’t in the Middle East.

GMS Responds to BBC Report on Ship Recycling in Alang

New chairman and board members at IBIA