The U.S.-Mexican energy partnership helps explains why approving the USMCA deal is such an urgent priority.

Unfortunately, the Trump administration has announced plans to impose a 5% tax on all goods imported from Mexico and these tariffs would potentially rise to 25% by October.

A Mexican retaliation is a direct threat to the U.S. oil and gas business

For example, Mexico has been the largest buyer of piped gas (taking in twice what Canada takes) and is the second buyer for our burgeoning LNG business.

Mexico also accounts for 60% of our gasoline exports and 20% of our diesel sales.

In 2018, Mexico imported around 1.7 Tcf of piped gas from the U.S., which was actually 55% higher than our LNG exports to all countries.

As such, Mexico takes about 5-7% of total U.S. gas production.

These exports are a boon to U.S. producers, pipeline companies, and exporters allowing even more cheap U.S. oil and gas to flow into Mexico.

Overall, the U.S. supplies over 70% of the gas used in Mexico, with even more potential.

With declining domestic production, Mexico has the most upside for incremental oil and gas demand of all our OECD partners.

Even U.S. LNG will continue to remain important in Mexico because its pipeline system is short and numerous regions require water-shipped supply to utilize gas.

In fact, without the Mexican outlet, U.S. domestic gas prices would unsustainably be 30-35% lower, pushing the suppliers of our go-to fuel even more to the brink.

Gas has already plummeted to prices not seen since Spring 2016.

Without a strong export opportunity, many of our companies could go bankrupt.

Exports help beget more domestic production, a fact that continues to go underappreciated by too many of our own users and policymakers.

Many environmental groups are actually pro-gas exports in particular because natural gas helps lower emissions and backup wind and solar. 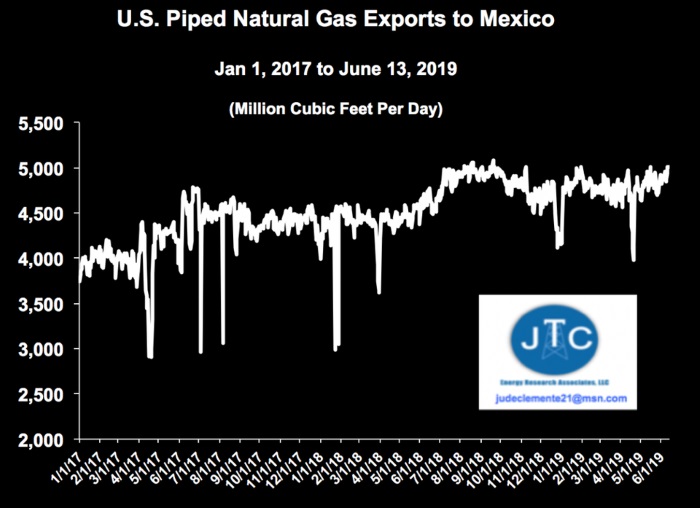 Oil and gas links with Mexico and Canada are essential to the national security of the North American bloc, i.e., our three E’s: economic, energy, and environmental security.

The U.S., Canada, and Mexico energy markets are integrated and interdependent.

There is a free flow of energy products across the three nations that support lower prices, reliable supply, millions of jobs, and a stronger economy.

This North American alliance is increasingly critical in a world where riskier partners are aligning to manipulate pricing on oil and gas – two sources that account for nearly 65% of the world’s energy supply.

To illustrate, OPEC and other producers including Russia are now in final talks for an agreement to cooperate on oil supplies on a long-term basis.

With a deal expected as soon as early-July, this represents a clear market manipulation threat to all oil consumers: this OPEC+ group produces 55-60% of the world’s oil and holds 85-90% of all proven reserves.

Bluntly put then, OPEC and Russia are benefitting from unrealistic Western environmental groups that seek to block our own domestic production and infrastructure build-out for oil and gas. They are doing the bidding of our adversaires.

We simply cannot afford to listen to those who ignore the reality that oil, for instance, is the world’s most vital source of energy, has no large-scale substitute, and has ever-growing demand.

In other words, any policy that blocks U.S. oil and gas production and exports is ultimately helping the other suppliers that know global demand faces a single direction: up.

If we don’t get our act together, we will dangerously be handing the market to OPEC and Russia

For example, India is working energy deals with Iran, and China is collaborating with Russia.

Even good friends like Australia are major competition for us.

The Aussies have a $200 billion LNG construction boom that will surge the country past Qatar as the world’s top exporter of the fuel.

With China now having a 25% retailiation tariff on U.S. LNG: “Having a gas: Australia dominates China’s LNG supply.”

The Trump administration continues to tout U.S. oil and gas exports, but trade wars are greatly complicating our goals.

We simply must support free trade agreements and oppose market restrictions: they run contrary to the benefits retained through USMCA.

This includes tariffs that create uncertainty for U.S. energy projects and threaten our jobs, as well as America’s energy leadership around the world.
Source: Forbes