Thoresen Thai Agencies Plc. (TTA) announced gross profits at Baht 662.4 million, increasing by 8% year-on-year, and positive EBITDA at Baht 267.1 million, increasing by 29% year-on-year. However, the first quarter in 2019 was characterized by a slowing of demand due to the low season of most businesses. In 1Q/2019, consolidated revenues, which increased year-on-year by 19% due to higher demand under Shipping and Offshore Service Segments, were recorded at Baht 3,706.6 million. Shipping, Offshore Service, Agrochemical, and Investment Segments contributed 46%, 22%, 15% and 17% to the consolidated revenues, respectively.

Mr. Chalermchai Mahagitsiri, President and Chief Executive Officer of TTA, said: “The first quarter is usually a low season for most of businesses. Plus, the Vale tailings dam collapse in Brazil in January, the continued trade dispute between US and China and the Cyclone Veronica in late March has pulled the BDI lower. However, the freight environment has now begun to improve as some of above factors have subsided. Looking further in 2019, there’re some risks in the demand side, but supply
could be potentially limited by the forthcoming IMO 2020 regulation, which would help stabilize freight rate growth”

“In the Offshore Service Segment, the crude oil market is expected to be fairly stable as OPEC and non-OPEC producing countries agreed to reduce oil production by 1.2 million barrels per day, from January to June 2019. There was also a turnaround from a negative EBITDA last year to a positive EBITDA this year. In the drilling business, the three high specification jack-up drilling rigs have performed strongly in the Middle East with 100% utilization in 1Q/2019.” “The PMTA’s fertilizer business faced tough export market condition as the Chinese government decided to revise its export tax rate on fertilizer down to zero in 2019, resulting in a decrease in export fertilizer sales volume. However, the domestic fertilizer sales volume picked up by 12% year-on-year, which accounted up to 86% of the total sales volume; most farmers favoured single fertilizer due to cost concerns.

The sales revenue in pesticide business increased by 12% year-on-year.” “In the Investment Segment, the Company has been undergoing store expansion strategy in the Food and Beverage business. Taco Bell, the world’s famous Mexicaninspired restaurant, which the Company opened the first two outlets at the Mercury Ville @ Chidlom and Siam Paragon, have been receiving overwhelming response from the customers.” 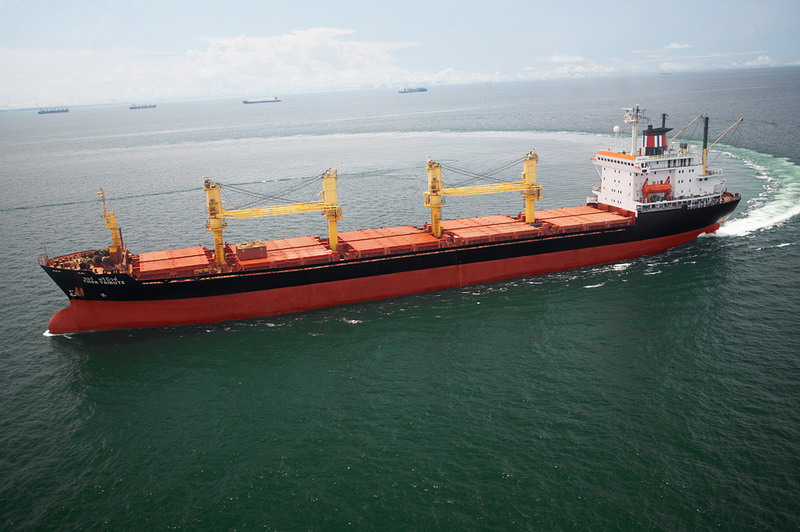 Key Strategic Business Unit Performance
Shipping Segment:
In 1Q/2019, the freight revenues of Shipping Segment were recorded at Baht 1,697.1, increasing by 31% year-on-year mainly due to higher demand from chartered-in fleet. Average TCE rate decreased 12% year-on-year to US 9,024 per day in 1Q/2019, but it outperformed net market TC Avg BSI of US 7,535 per day by 20%. Gross profits amounted to Baht 290.2 million. EBITDA was at Baht 238.7 million. In conclusion, Shipping Segment reported net profits to TTA of Baht 87.3 million in 1Q/2019. At quarter end, Shipping Segment owned 21 vessels with an average size of 55,285 DWT and an average age of 11.96 years.

Offshore Service Segment:
Offshore Service Segment’s revenues in 1Q/2019 were recorded at Baht 815.3 million, which increased 44% year-on-year mainly due to higher vessel utilization rate. Performing vessel utilization rate increased year-on-year from 39% in 1Q/2018 to 60% in 1Q/2019. Gross profits increased 407% year-on-year to Baht 99.3 million, compared to gross loss of Baht 32.4 million in 1Q/2018. Meanwhile, gross margin improved year-on-year from negative 6% to 12%.
For this reason, EBITDA was positively recorded at Baht 1.9 million, a 101% increase year-on-year. Summarily, Offshore Service Segment reported a net loss to TTA of Baht 83.5 million, improving 27% year-on-year in 1Q/2019. Furthermore, order book at quarter end was US$ 83 million. In drilling business under one of its associates, three high specification jack-up drilling rigs have performed strongly in the Middle East with 100% utilization in 1Q/2019. To date, one contract was extended for another 3 years with the same customer until 2022 while the others are scheduled to expire in July and December 2019 with chance for renewal for another 3 years until 2022.
Source: TTA