The U.K. oil and gas industry faces a faster decline if Prime Minister Theresa May fails to agree to a trade deal with the European Union, as restrictions on the movement of workers and equipment would increase costs.

A “no deal” Brexit, which has become a stronger possibility after talks ended in a deadlock this week, could restrict investments in the North Sea, hastening the existing decline of the aging basin, said Michael Bradshaw, professor of global energy at Warwick Business School. Oil & Gas U.K., the lobby group, has warned that the industry’s cost of trade could almost double if the country reverts to World Trade Organization rules.

The U.K. North Sea was already well past its peak when crude prices collapsed three years ago, but the industry has managed to sustain a modest rebound in output thanks to investments made when prices were high. Still, billions of dollars of spending has been deferred or canceled during the global slump, meaning growth may stall in the coming years. The uncertainty over how Brexit will affect the movement of goods and particularly people in one of the most globalized industries adds to those doubts. 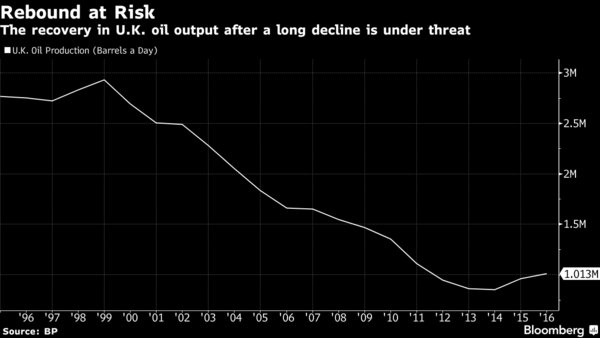 “The oil and gas industry is a global business and people move all over the world,” said Rob Barnett, a London-based analyst at Bloomberg Intelligence. “If Brexit makes it more difficult to bring in labor from other parts of the world, it could affect the ability to have a talent pool for the operations in the U.K.”

About 5 percent of those directly employed by the country’s oil and gas industry are non-U.K. EU citizens, according to a report earlier this year commissioned by Oil & Gas U.K. Of those workers, 70 percent are skilled and half are in managerial roles. They are “often critical” for projects, the study found.

The same study found the U.K. trades with the rest of the world goods and services related to the oil and gas industry worth about 73 billion pounds ($97 billion) a year, which could include anything from drilling rig rentals to purchasing steel piping to the oil itself. The cost to companies of conducting this trade is about 600 million pounds a year, which could rise to 1.1 billion pounds should the U.K. and the EU fail to agree to a deal and revert to WTO rules, something the lobby group described as a “worst-case scenario.”

For an industry that’s struggling to withstand the worst downturn in a generation the additional costs would hurt. Still, there’s not much they can do other than “factor in all possibilities,” Warwick’s Bradshaw said.

Major North Sea producers including Royal Dutch Shell Plc, BP Plc, EnQuest Plc and Premier Oil Plc declined to comment on the potential impact of a Brexit without an EU trade deal, as did services companies including John Wood Group Plc and Petrofac Ltd. They also didn’t say what measures they are putting in place, if any, to minimize the risks.

The industry may have to live with this uncertainty for some time. The EU’s chief negotiator, Michel Barnier, said on Thursday talks are at an impasse over how much money the U.K. owes when it leaves. The U.K.’s May has said she wants a two-year transition period to ease the anxiety for businesses, but both sides raised the prospect this week of talks breaking down without an agreement.

“It is creating a heightened level of uncertainty,” Bradshaw said. “There’s very clear tension between the fact that we have to maximize recovery in the North Sea and we don’t know the nature of our future trading relations with the European Union.”
Source: Bloomberg