Home / Commodities / Commodity News / U.S. coal consumption in 2018 expected to be the lowest in 39 years

U.S. coal consumption in 2018 expected to be the lowest in 39 years

The electric power sector is the nation’s largest consumer of coal, accounting for 93% of total U.S. coal consumption between 2007 and 2018. The decline in coal consumption since 2007 is the result of both the retirements of coal-fired power plants and the decreases in the capacity factors, or utilization, of coal plants as increased competition from natural gas and renewable sources have reduced coal’s market share. 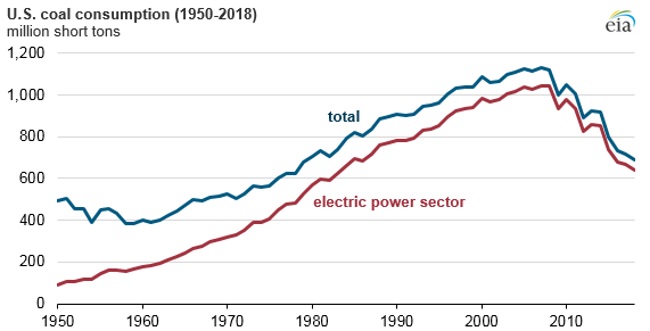 In 2007, coal-fired capacity in the United States totaled 313 gigawatts (GW) across 1,470 generators. By the end of 2017, 529 of those generators, with a total capacity of 55 GW, had retired. So far in 2018, 11 GW of coal-fired generating capacity has retired through September, and another 3 GW are expected to retire in the final three months of the year, based on data reported to EIA by plant owners and operators. If these plants retire as planned, 2018 will be the second-highest year for coal retirements. Another 4 GW of capacity are planning to retire by the end of 2019.

Environmental concerns have also played a role in coal retirements. Coal retirements were highest in 2015, driven in part by stricter emissions standards required by the Mercury and Air Toxics Standards (MATS) rule, which went into effect in April of that year for coal- and natural gas-fired power plants. Instead of investing in emissions control technologies, many smaller power plants that operated at lower capacity factors were retired before the new standards were implemented. Some plants applied for and received one-year extensions, which contributed to retirements in 2016.
Source: EIA

2018-12-29
hellenicshippingnews..
Previous: Oil Sell-Off Is Deepest to Follow an OPEC Output Cut in a Decade
Next: Prices for China’s steel, steelmaking ingredients ease in listless market