U.S. tariffs on metal imports are playing havoc with earnings at some of the most recognizable industrial companies in America, and a look at steel and aluminum prices shows why.

Surging demand and a 25 percent U.S. tariff have combined to send the benchmark domestic steel price surging more than 40 percent this year. Premiums added to the price of aluminum for delivery in the U.S. Midwest have more than doubled this year. In March, the U.S. announced a 10 percent tariff on imports of the metal. 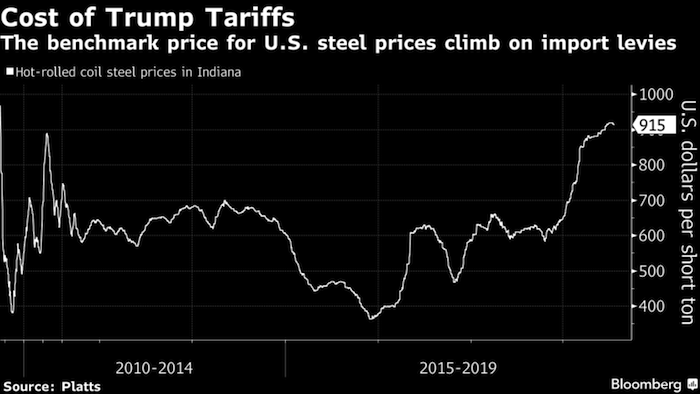 Companies lowering profit forecasts or citing rising metals costs as a concern when they reported earnings this month include:

-General Motors Co.: The automaker cut its forecast for profit this year on Wednesday, in part because of the rising metals prices. Raw-material costs probably will be a $1 billion headwind to GM’s profit this year — roughly double its previous expectation, the company said.
-Harley-Davidson Inc.: The motorcycle maker cut its forecast for profit margin this year. Operating margin will drop to between 9 percent and 10 percent this year due to the expected impact of tariffs, the Milwaukee-based company said in a statement Tuesday.
-Whirlpool Corp.: The maker of home appliances said rising raw-materials costs hurt results in three out of four of its regional markets in the second quarter. Whirlpool said raw-material inflation will cost the company about $350 million in 2018. That’s up from the $250 million to $300 million it predicted in April.
-Lincoln Electric Holdings Inc.: The Cleveland-based maker of welding equipment and supplies is applying a surcharge to products affected by the levies, giving customers a degree of transparency into how much the tariffs are adding to their costs.
-Plains All American Pipeline LP: The company’s request for an exemption from steel-import tariffs was rejected by the U.S. government. The ultimate cost of the rejection: Roughly $40 million, said Willie Chiang, the company’s chief operating officer, who called it a “‘tax” in comments to Congress on Tuesday.
-Sonoco Products Co.: The packaging company projected tariff costs in the second half that could be in the range of $7 million to $9 million, primarily for steel and aluminum, including foil laminates and labels.
-Electrolux AB: The Swedish maker of vacuum cleaners and kitchen appliances said the latest U.S. trade tariffs could cost some $10 million during the second half of this year. The 10 percent tariffs on a raft of Chinese-made goods announced this month will drive up expenses, said the company, which imports components from China.
-Alcoa Corp.: The biggest U.S. aluminum producer lowered its 2018 profit projection last week, citing headwinds from tariffs on the lightweight metal as one reason. The company has been hit with $15 million in costs so far on material it made mostly in Canada and shipped to the U.S. 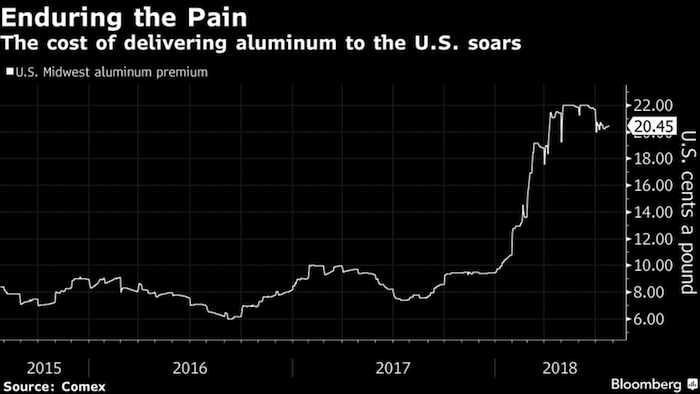 2018-07-27
hellenicshippingnews..
Previous: GRAINS-Wheat set for 2nd week of gains, soybeans up on higher U.S. exports
Next: Jordan makes no purchase in tender for 120,000 T wheat: trade