U.S. corn shipments fell to a 19-month low in June, and they were unlikely to have done much better in July as elevated prices and foreign competition continued to suppress export business for the world’s top corn supplier.

Meanwhile, U.S. soybean exports were record large for the month as shippers look to fulfill the large amount of outstanding sales to top buyer China.

According to data published on Friday by the U.S. Census Bureau, the United States exported 3.07 million tonnes of corn in June, the smallest June volume in six years and the smallest for any month since November 2017. This was also off 57% from last June’s blockbuster performance. 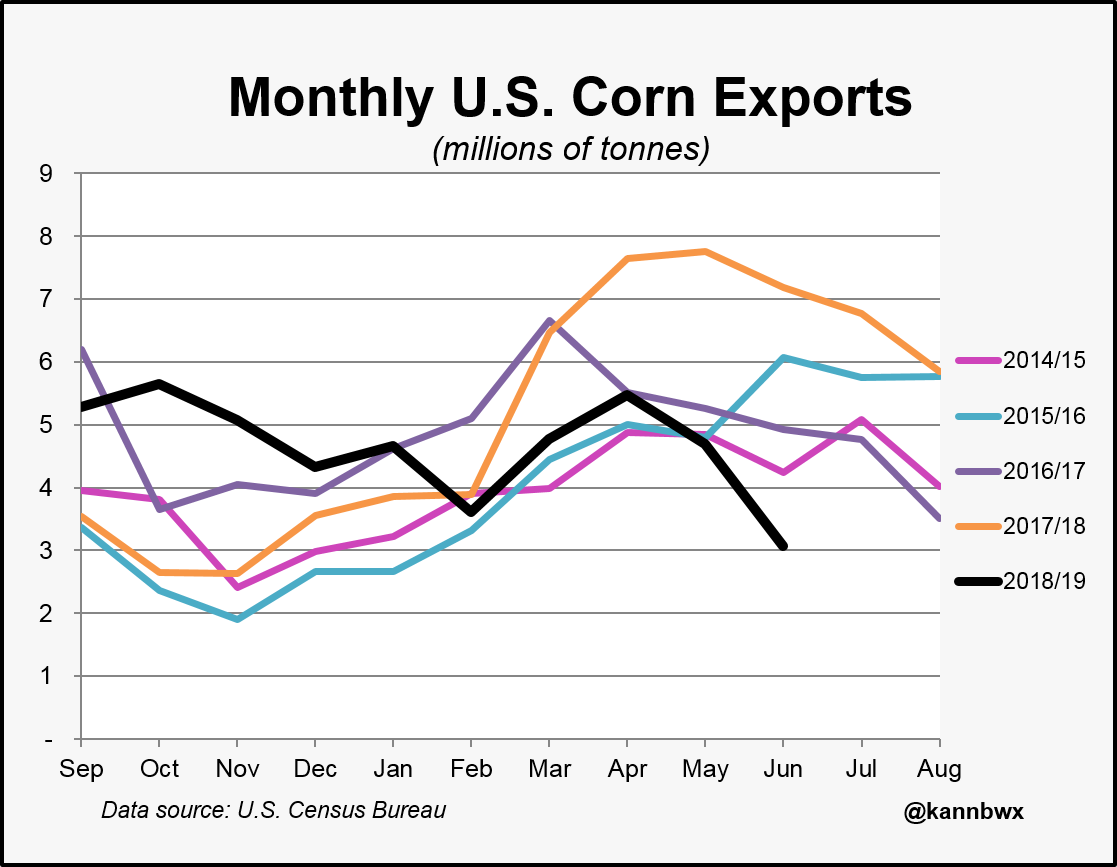 U.S. corn shipments in the first 10 months of the 2018-19 marketing year that began Sept. 1 totaled 46.6 million tonnes (1.84 billion bushels). That is down 5% from a year earlier, and June was the first month in which 2018-19 corn exports slipped behind those of the previous year.

July and August shipments need to average 3.36 million tonnes to meet that expectation, which is well below the recent average, but weekly export inspection data from the USDA suggests that July may have fallen short of that mark. 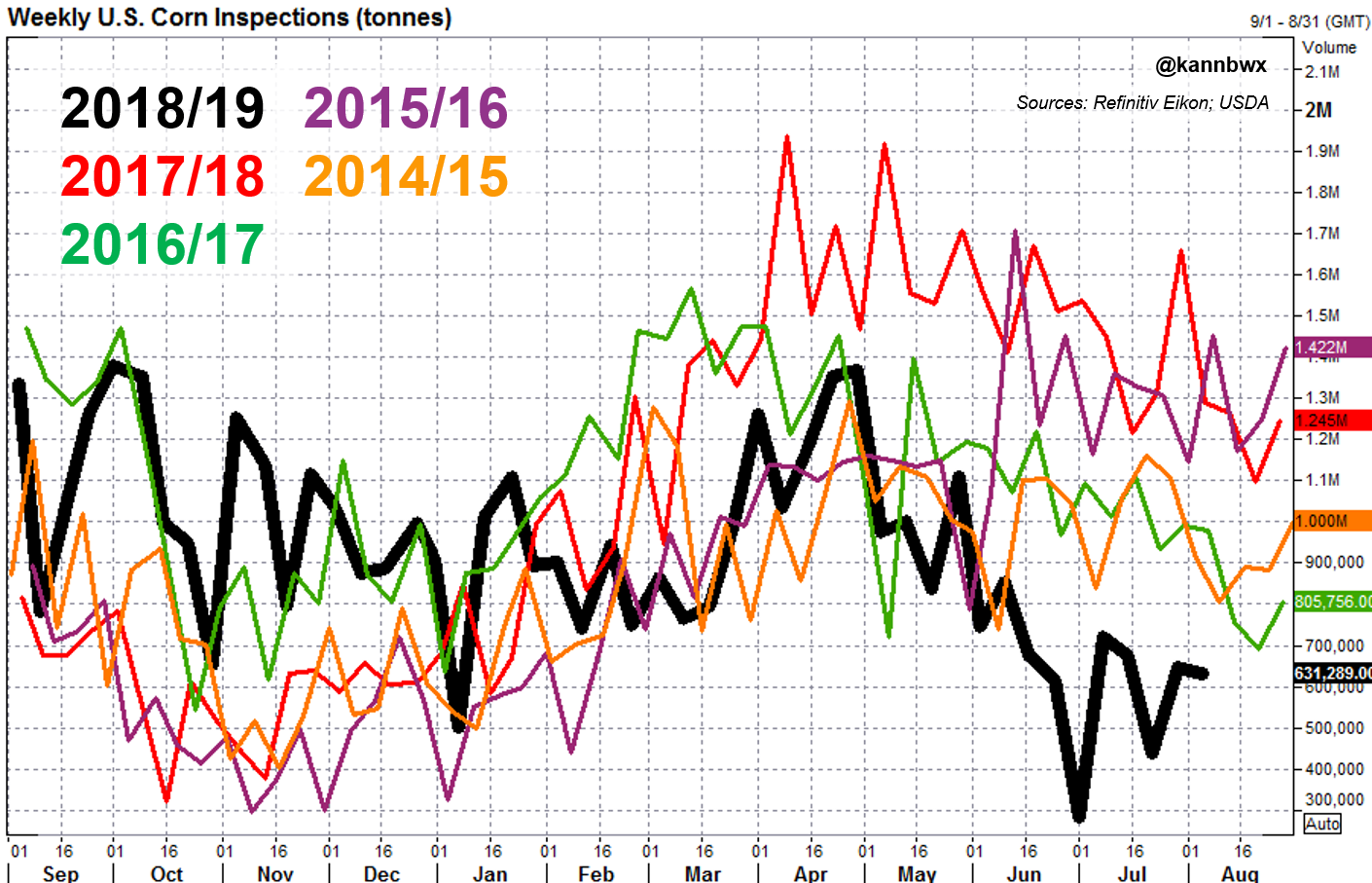 Despite the lackluster U.S. shipments, the world is still getting its corn thanks to competitors in South America. No. 2 exporter Brazil shipped 6.3 million tonnes of the yellow grain in July, a record volume for any month. 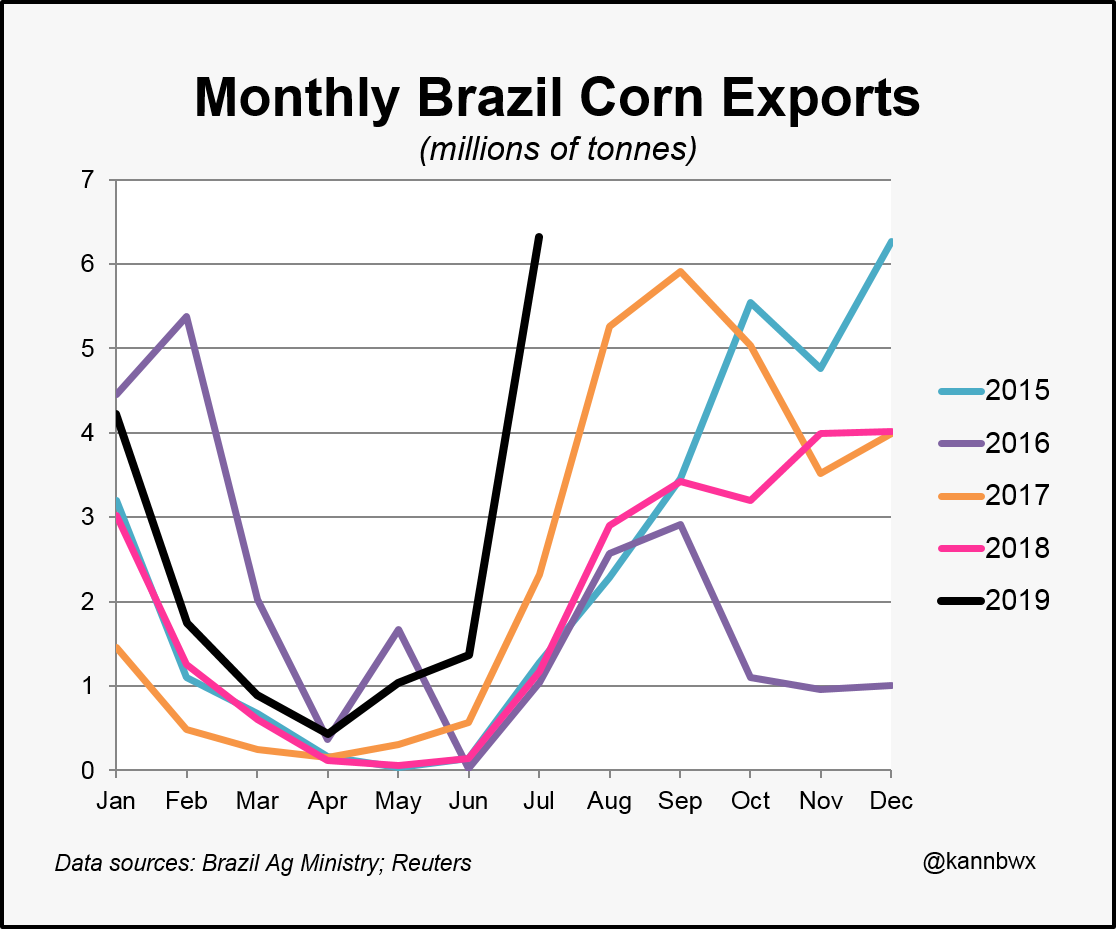 According to USDA estimates, Brazil, Argentina and Ukraine will combine to export 99.5 million tonnes of corn in 2018-19, some 52% more than the year before. The previous record for the three major corn suppliers is 78.9 million tonnes in 2016-17.

ALL ABOUT CHINA
The United States exported 3.19 million tonnes of soybeans in June, topping last year’s record for the month of 3.12 million. Between September and June, shipments totaled 38.95 million tonnes (1.4 billion bushels), down 24% on the year.

Exports to China reached 1.73 million tonnes in June, some 54% of total exports for the month. That was China’s largest monthly share of U.S. soybean exports and the first time it exceeded 50% since January 2018.

Shipments to destinations other than China totaled 1.47 million tonnes, down substantially from the previous year but above recent June averages, suggesting that soybean business with other countries is proceeding as usual. 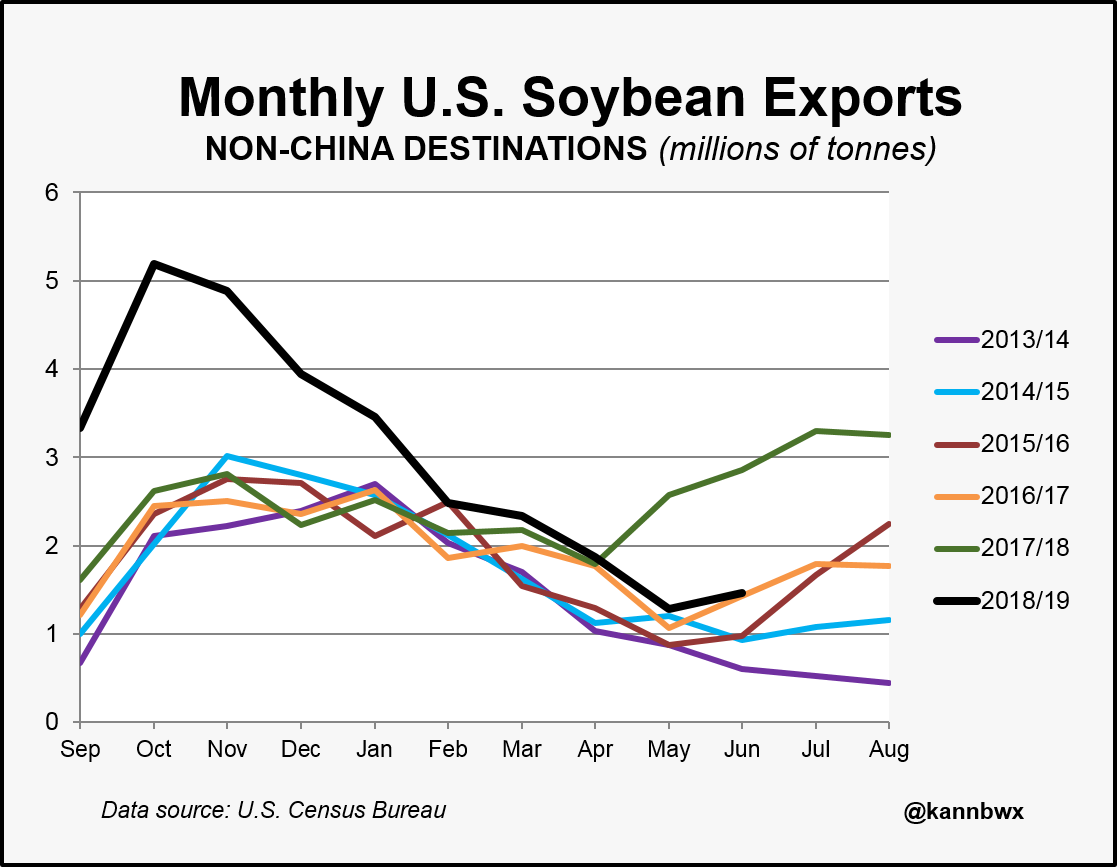 But China remains the focus, as some 4.25 million tonnes of U.S. soybeans still awaited shipment to the Asian country as of July 25. Export inspections imply at least 579,000 tonnes sailed to China in the week ended Aug. 1.

USDA predicts that U.S. soybean exports will reach 46.3 million tonnes (1.7 billion bushels), meaning that an average of 3.66 million tonnes must leave U.S. ports in both July and August. Inspection data implies that July shipments topped that mark, but the weekly pace must reach nearly 750,000 tonnes per week from now through Aug. 31 to match USDA’s outlook. 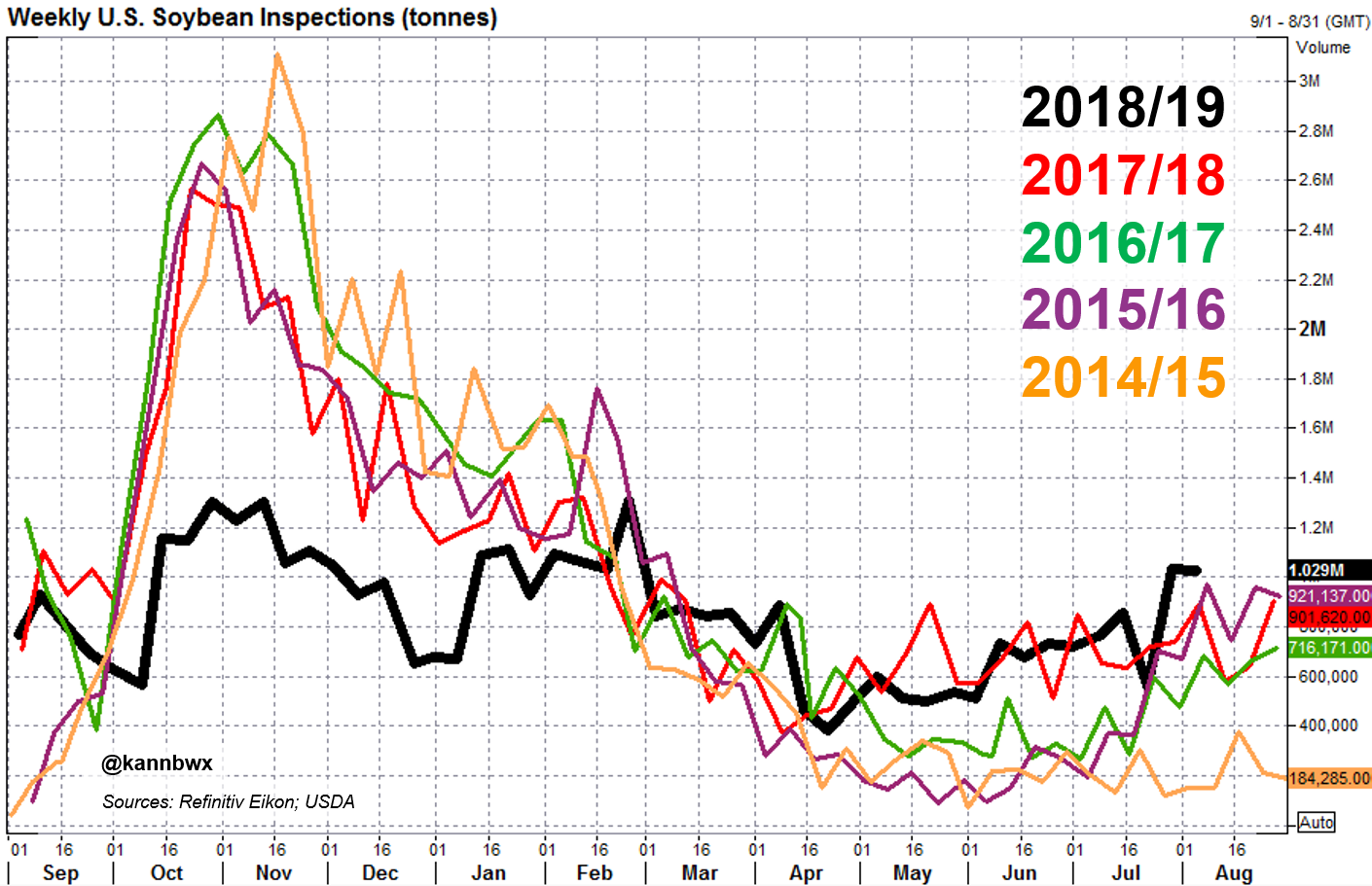 Whether that happens will largely depend on whether the Chinese sales are fulfilled. Total soybean commitments for 2018-19 stood at 48.7 million tonnes as of July 25, meaning that there is some wiggle room, but not if China were to suddenly cancel orders.

But U.S.-China trade relations have soured since U.S. President Donald Trump on Thursday vowed to put tariffs on more Chinese goods beginning in September, partially fueled by his claim that China had not fulfilled promises to buy large volumes of U.S. farm products.

Early Tuesday morning in Beijing, China’s Commerce Ministry announced that Chinese companies have stopped buying U.S. agricultural products and that China could possibly place import tariffs on any products that were bought after Aug. 3.

It appeared that China still planned to honor earlier agreements to import U.S. soybeans, which would mostly be shipped this month and next month. The trade dispute also seriously threatens the 2019-20 U.S. soybean export campaign if its top buyer plans to shun the U.S. oilseed.

Outstanding sales for the 2019-20 marketing year are already at a multiyear low. As of July 25, only 3.33 million tonnes of U.S. soybeans were on the books for the new year beginning in less than a month. That compares with 10.4 million tonnes a year earlier and 6.4 million two years ago.
Source: Reuters (Editing by Matthew Lewis)