The United States for many decades had been known as the world’s breadbasket, leading the way in corn, soybean and wheat exports. But although trade volumes remain historically high, the country’s relative impact on global exports is smaller than ever.

High grain and oilseed prices, increasing global demand and weaker currencies have all contributed to the decline in U.S. export dominance. In recent years, U.S. crop shortfalls between 2010 and 2012 permanently reduced the country’s market share and contributed to the rise of competing producers.

Today, the United States exports just over a quarter of the world’s corn, wheat and soybeans, compared with more than half some 30 years ago. The country also grows about a quarter of those global crops, a smaller portion than in previous decades, though the decline is much less extreme versus that of exports.

Despite the slip in export prominence, the U.S. Department of Agriculture predicts record domestic export volumes of corn and soybeans in the 2020-21 year ending on Aug. 31. That is due to increasing global demand led by China.

U.S. wheat exports are seen at a four-year high in 2020-21, which ends May 31, but they will remain below the longer-term average.

Soybeans have undergone the most dramatic shift in export share. Huge leaps in U.S. soybean technology and research in the mid-20th century rendered the country the only supplier of the oilseed by 1970, accounting for nearly 95% of world exports. 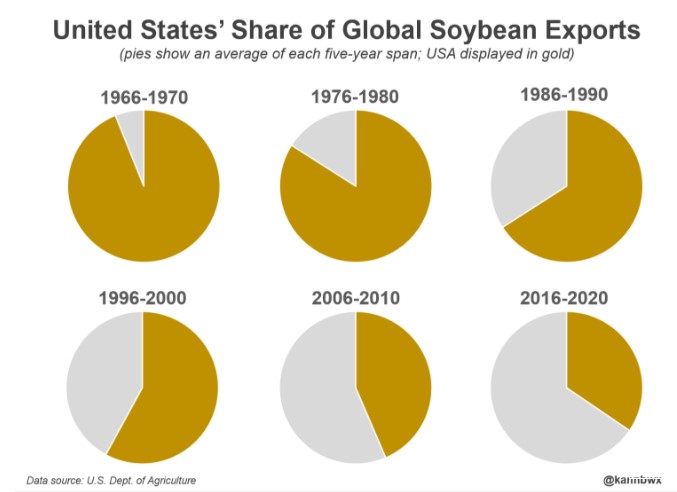 Brazil began emerging as a major soybean producer about 50 years ago, though that expansion has been the most pronounced in the latest decade. Brazil became the top exporter in 2012 after two disappointing U.S. harvests, and the South American country now accounts for half of global soybean exports while the U.S. share is about 35%, down from nearly 60% in the late 1990s.

Roughly half of today’s U.S. soybean crop is devoted to exports, and the rest is crushed into protein-rich meal for animals. That share has increased in recent decades, as only about 35% was exported in 2000.

The United States comfortably remains the top corn supplier, but its export dominance also fell victim to the drought-stricken 2012 U.S. harvest. In 2005, U.S. exports accounted for about 60% of global corn trade, though 10 years later that share plunged to 33%, where it resides today. 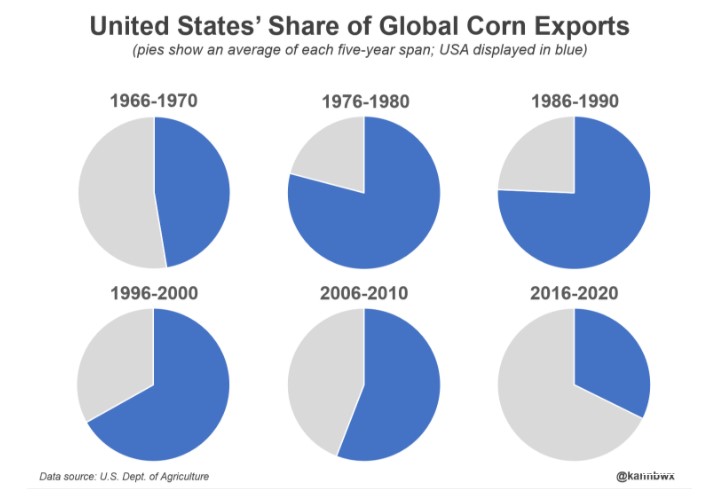 In the 1970s and 1980s, as much as 80% of the world’s annual corn shipments came from U.S. shores. At that time, more than a quarter of the U.S. corn crop was exported. But only around 15% is exported today, partially due to increased competition with ethanol producers that began about 15 years ago.

The United States was on top of the wheat export market until midway through last decade. Wheat production and specifically export capabilities have recently boomed in the Black Sea, and combined shipments out of Russia and Ukraine at present are more than double annual U.S. volumes.

U.S. wheat exports are the second-largest behind Russia, accounting for roughly 14% of global trade. Canada is a close third, and those three countries compete with wheat from Australia, Argentina, Europe and Ukraine.

Ten years ago, the U.S. wheat export share was around 23%, down from a third in the early 1990s and more than 40% in the 1970s. About half of the U.S. wheat crop is exported, largely unchanged over the last two decades. 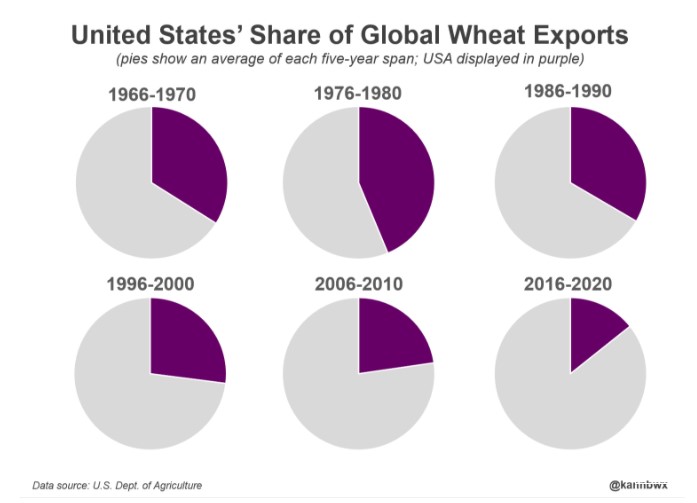 Crops are sold in dollars on the international market, so non-U.S. farmers can be particularly eager to sell their products when their own currency weakens, increasing the availability of exportable supply. Widespread crop failures, like the 2012 U.S. harvest, boost global prices and further entice production increases outside of the United States.

The devaluing of Russia’s currency in 2014 was a major factor in the rise of Black Sea wheat production and trade. A weaker Brazilian real has caused farmers to heavily market their recent and upcoming corn and soybean harvests and plant a record area of both in the current year.

But runaway inflation actually keeps supplies from the export market. That has been recently demonstrated in Argentina, where farmers have held on to their grain due to uncertainties over increasing economic instability.

The United States still grows by far the world’s largest corn crop, and it also produced the largest soybean crop until three years ago when it was surpassed by Brazil.

The U.S. wheat harvest is the fourth-biggest behind those of China, India and Russia. China became the top wheat grower nearly 40 years ago, though it is inactive on the export market.

In the last four decades of the 20th century, the United States’ share of global corn, soybean and wheat production was mostly steady at around 30%. That dropped to 27% in the 2000s and to 24% during the 2010s. 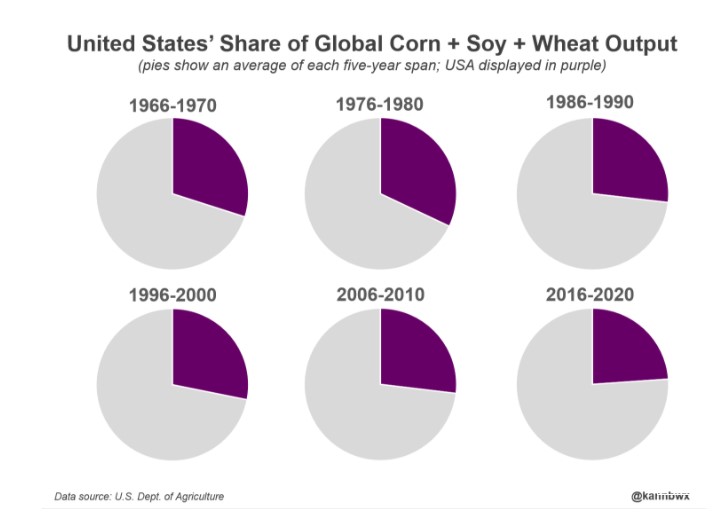 Once again, the biggest changes happened in soybeans. In 1970, U.S. soybean output accounted for nearly three-fourths of the global total. That share fell to 50% by 1990 and has steadily declined to about one-third today, largely on expanding capacity in Brazil.

The United States in recent years is still producing just as much corn and soybeans as it ever has, but wheat production has declined, especially within the last decade, as farmers swap wheat acres for more profitable crops like corn and soy.

USDA last month tentatively predicted record U.S. corn and soybean crops in 2021 of 15.15 billion and 4.525 billion bushels, respectively. That is coming off disappointing harvests in both 2019 and 2020.

The opinions expressed here are those of the author, a market analyst for Reuters.
Source: Reuters (Editing by Matthew Lewis)