Even with China’s smaller-than-threatened tariff on U.S. natural gas, American cargoes may still be kryptonite for Chinese traders trying to navigate the ongoing trade war.

Chinese buyers will seek to avoid purchasing U.S. liquefied natural gas as long as any tariffs are in place because of the risk that duties may rise further and possibly without warning, according to officials from four importers. While they said they would prioritize cargoes from other suppliers, they couldn’t entirely rule out buying U.S. shipments. The officials asked not to be identified discussing procurement strategy. 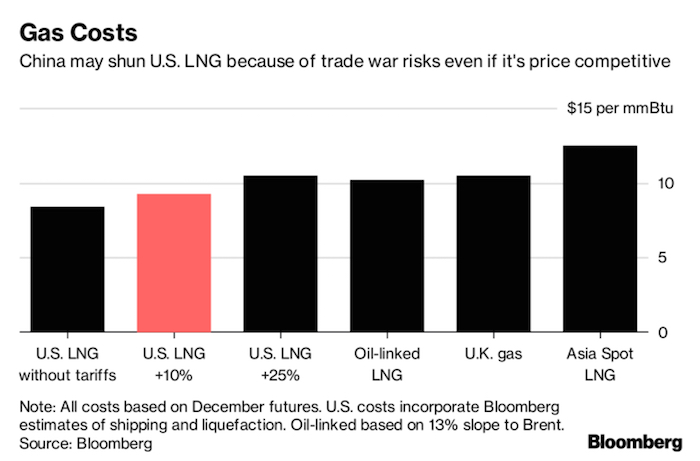 “The tariff could end direct trade in LNG between the two countries,” Goldman Sachs Group Inc. analysts including Christian Lelong said in a Sept. 19 report. “The decline in trade flows will likely be swift because China imports most of its LNG from the U.S. on a spot basis.”

China announced Tuesday a 10 percent tariff on American goods, including LNG, starting Sept. 24 in retaliation for a similar-sized levy imposed by the U.S. While China struck below the 25 percent duty it threatened last month, the ongoing trade tensions are seen turning off buyers in China, the world’s biggest and fastest-growing natural gas market.

That could go for both taking individual, or so-called spot, cargoes, as well as tying themselves to projects with long-term spending and supply commitments in the U.S., where more than a dozen projects are seeking about $139 billion in investments.

“For a Chinese buyer, the overall risk profile for procuring U.S. LNG remains heightened,” Saul Kavonic, Credit Suisse Group AG’s director of Asia energy research, said by email. “Even with a smaller tariff, there has likely been some longstanding damage done to the perception of reliability of U.S. LNG supply in the eyes of Chinese buyers who will shape the next wave of global LNG projects.” 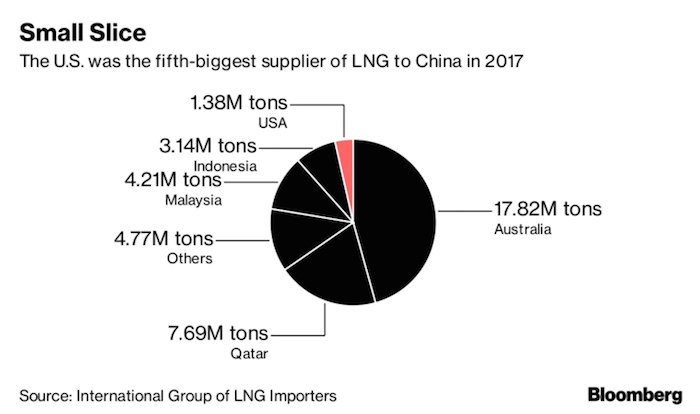 U.S. LNG sales are linked to the nation’s benchmark Henry Hub gas price, which is down about 1 percent this year, while supply from most other exporters is tied to oil, which has gained 18 percent over that period. That’s made American fuel cheaper than other sources, an advantage that’s being eroded by tariffs.

China may shift its buying from the U.S. to other exporters, including Qatar and Papua New Guinea, according to Bloomberg Intelligence analysts Lu Wang and Kunal Agrawal. There is about 103 million tons a year of aggregate capacity in new LNG plants near final investment decisions in those countries, along with Russia, Nigeria and Mozambique, that benefit from the tariffs, Goldman said.