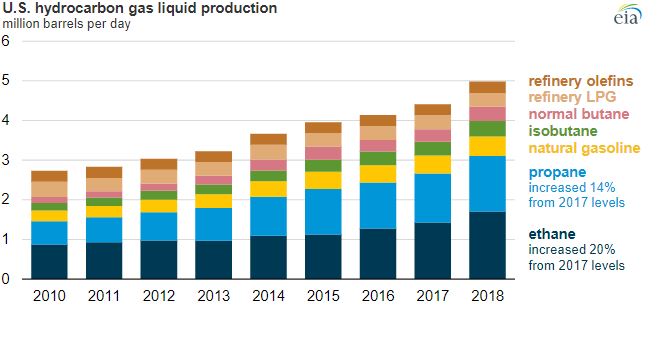 Ethane and propane account for two-thirds of HGL production. Ethane production reached 1.71 million b/d in 2018, a 20% increase over 2017 levels. Ethane, the lightest NGPL, can (within some limits) be left in the processed natural gas stream at natural gas processing facilities—a process called ethane rejection—or it can be recovered from natural gas if ethane’s value is sufficient to cover the additional costs to produce and distribute the ethane to markets.

Demand for ethane in 2018 was driven by increased use in the petrochemical sector, which converts ethane into ethylene for use in the production of plastics, resins, and fibers that go into the production of many consumer goods. Several new petrochemical crackers were commissioned in the United States in 2018. Chevron Phillips Chemicals and ExxonMobil each commissioned facilities that process an estimated 90,000 b/d of ethane as feedstock. Indorama Ventures commissioned a smaller petrochemical cracker estimated to consume 20,000 b/d of ethane as feedstock. 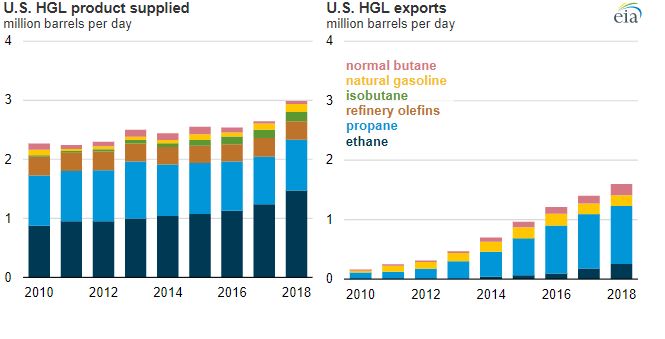 Besides the petrochemical sector, where demand growth has been robust, the capacity of the U.S. domestic market to consume HGLs has not expanded at the pace of growing supply. The international market has become the preferred destination for most of the incremental growth in U.S. HGL production. HGL exports have been growing rapidly, particularly for propane, increasing 14% over 2017 levels. In 2018, nearly a third of U.S. HGL production was exported.

Propane production grew from 1.54 million b/d in 2017 to 1.70 million b/d in 2018, a 10% increase. Changes in domestic demand for propane, which is used in the residential and commercial sectors as a heating and cooking fuel and in the industrial sector as a petrochemical feedstock, are mostly driven by weather and consumption. Propane demand has been fairly flat on an annual basis in recent years.