Since the beginning of October, the Norwegian shipping company UECC has included Cuxhaven in its Baltic Service. In the deep-water port at the Elbe estuary, various imports coming from Russia and also Finland are unloaded and loaded into the European hinterland. In addition, there are regular UECC services from Cuxhaven to the United Kingdom and other network ports of the shipping company, such as Zeebrugge. The two LNG-fuelled RoRo carriers “Auto Energy” and its sister “Auto Eco” are used in weekly rotation. The members of the Cuxhaven Port Association (HWG), BREB and Cuxport manage the port calls of the 181-metre-long and 30-metre-wide car carriers.

The “Auto Energy” and its sister vessel “Auto Eco” can load a large number of different rollable goods on ten decks each and a total area of 31,900 square metres. For example, the two vessels offer space for 4,000 cars. In addition, they are equipped with ramps that can take 160 tonnes of heavy cargo. As part of the UECC Baltic Service, the two carriers call at Cuxhaven coming from St. Petersburg in Russia and Hanko in Finland. In the deep-water port at the Elbe estuary, the imports are unloaded and loaded into the European hinterland. For export to the UK, but also to other European network ports of the shipping company, such as Zeebrugge, new cars of a premium manufacturer are loaded, general cargo, such as steel, forestry products, machinery, and transport systems as well as project cargoes are handled and transported on MAFI trailers. Terminal operator and HWG member Cuxport handles the unloading and loading.

“Cuxhaven is one of the largest automobiles ports in Germany. As a lock-free deep-water-port with nearby transhipment sites, the Port of Cuxhaven offers the optimal conditions for the fast and smooth handling of large RoRo vessels, such as the ‘Auto Energy’ and the ‘Auto Eco’,” says Oliver Fuhljahn, Head of Business Development Automobile Logistics at Cuxport. 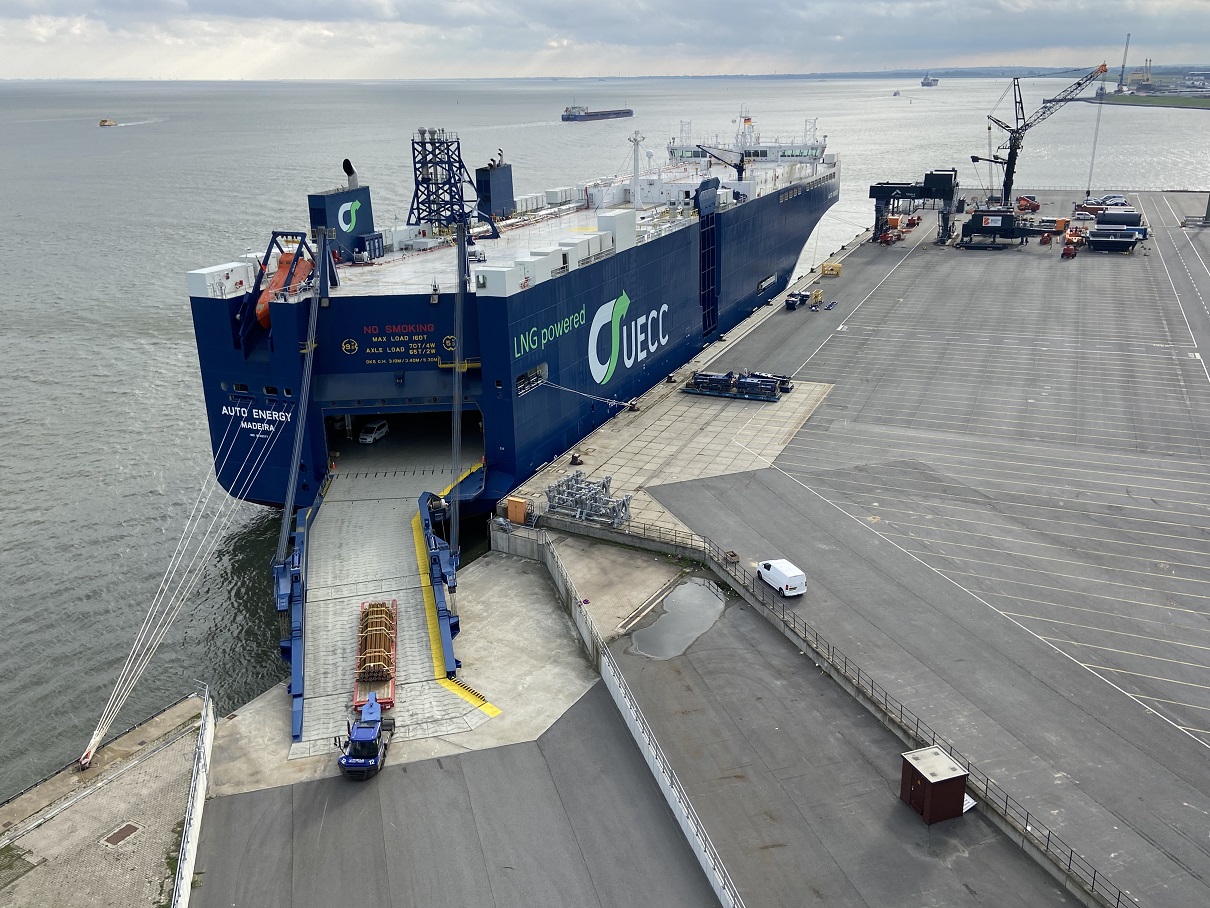 The Norwegian shipping company is paying special attention to more environmentally friendly propulsion systems for its ships. UECC is considered a pioneer in the use of hybrid technology on board of Pure Car/Truck Carriers (PCTCs). The “Auto Energy” and the “Auto Eco”, for example, are powered by a dual-fuel engine that runs on both LNG (liquid natural gas) and diesel. This makes the vessels, which entered service in 2017, among the world’s first carriers with LNG propulsion. Since its introduction into the European liner network, UECC has reduced its CO2 emissions by more than 18 million kilograms annually. In addition, the ships can also be operated with future synthetic fuels, which will enable even greater emission reductions. UECC also plans to introduce three new dual-fuel LNG battery hybrid PCTCs in 2022.

“Sustainability is now firmly embedded in the corporate strategies of car manufacturers. This is also being integrated into their decision-making processes when selecting transport and logistics service providers. UECC has taken a pioneering role in the field of carbon-neutral ship transport. With our customers, we show that environmentally conscious transport also makes economic sense. We are pleased to use our LNG-powered ships in our regular traffic to Cuxhaven,” says Bjorn O. Gran Svenningsen, Director Sales and Marketing at UECC.

Since 2011, the shipping company’s liner agency has been BREB GmbH & Co. KG in Cuxhaven. Managing Director and Vice Chairman of the Cuxhaven Port Association, Arne Ehlers, adds: “Ports must make their contribution to climate and environmental protection. We therefore strive to continuously develop the Cuxhaven site in terms of technologies and sustainability. Cuxhaven was one of the first German seaports to be regularly called at by LNG-fuelled cargo ships. We are therefore very pleased about the new liner service from Cuxhaven by UECC with their LNG-fuelled RoRo carriers.”
Source: UECC