The Ukrainian corn prices are expected to be strong through the first half of 2022 on demand from main importers and potential production decrease in South America.

Ukraine — a leading global corn producer — has seen firm prices for the past few months on demand from China and harvest delays, despite bumper crop expectations.

In 2021-22 (October-September) marketing year, Ukraine is likely to produce 40 million mt of corn, almost 10 million mt higher than last year, according to S&P Global Platts Analytics, with 38% higher export potential this year at 33 million mt. Some analysts predicted the corn crop above 40 million mt though. If the higher potential proves to be true and if the additional volume is harvested, it can be a bearish factor in 2022.

The world corn balance also appears to be heavier than last year, exercising pressure on the global corn market. The US Department of Agriculture, or USDA, estimated the world’s 2021-22 corn production at 1.208 billion mt, 8% higher from the previous year, with the ending stocks rising by 4% to 305.5 million mt, according to its December World Agricultural Supply and Demand Estimates, or WASDE, report.

However, the prices remained firm in Ukraine following harvest delays, resulting in low availabilities in ports and a decent demand from China.

China imported 3.3 million mt of corn from Ukraine in October through December, with already around 700,000 mt in lineup for January, according to logistic companies and market sources.

China is expected to keep importing corn from Ukraine in the first half of 2022, according to sources, with total MY 2021-22 corn imports from Ukraine likely to amount to 6 million-7 million mt. “It seems like right now China’s still likes the label non-Genetically Modified corn. So that’s why Ukraine still kind of sits pretty well,” said Matt Ammerman, commodity risk manager, vice president of the Eastern Europe/Black sea region with Stone X. 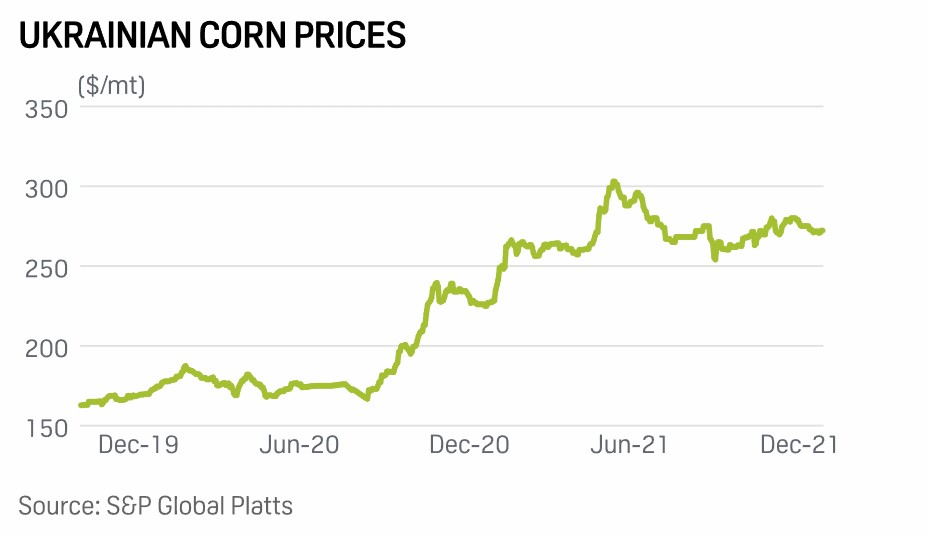 China’s recovering hog-herd from African Swine Fever in 2018-19 — when up to 40% of hogs population was lost — alongside ambition to become self-sufficient in pork production has kept the country’s imports on the move. China’s corn demand for 2021-22 was seen at 26 million mt by the USDA.

However, China’s corn output in MY 2021-22 was seen rising to 272.55 million mt from 260.67 million mt in MY 2020-21, according to China’s Agriculture Supply and Demand Estimates. This was raising some doubts on China’s corn import intentions. Platts Analytics sees China’s 2021-22 corn imports at 22 million mt.

At the same time, the export pace from Ukraine has been same as last year so far due to lower demand from other importers, harvest delays and tight logistics in the country. Exports from October through December amounted to 8.8 million mt, according to the ministry of agriculture and market participants, same level as last year. 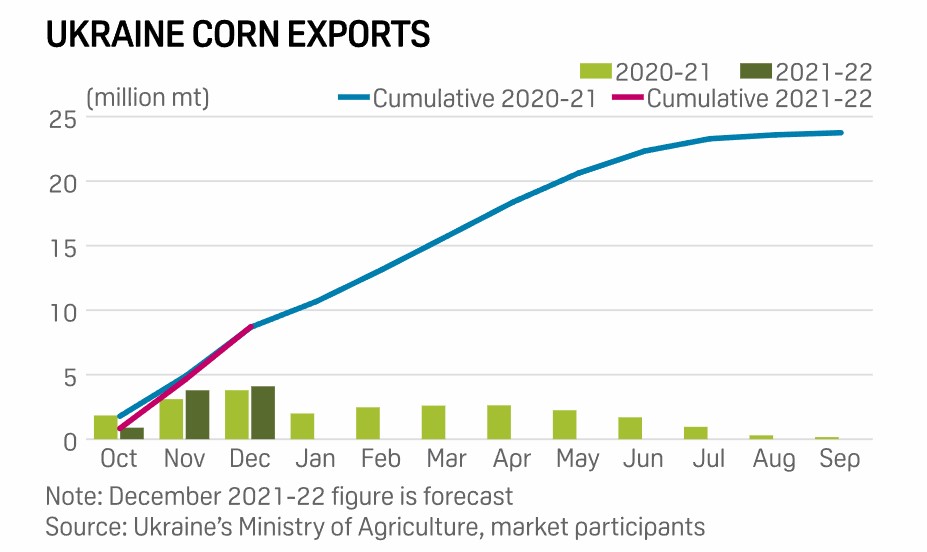 Corn imports by the EU — the leading corn importer from Ukraine — were maintained at the same level on the year at around 15 million mt by USDA.

The EU imported 6.5 million mt of corn from July 1-Dec. 19, 2021, according to the European Commission, compared with 8.2 million mt during the same period in 2020. This gives good opportunity for Ukrainian corn in the first half of 2022 though it will be competing with Brazil for the EU market.

Meanwhile, the safrinha corn in Brazil, which accounts for most of the country’s exports, will not hit the market in significant quantities till July 2022.

Ukraine will also compete with Argentina in the first half of 2022 for the Middle-Eastern destinations in particular. The harvest is expected to start in mid-February to March in Argentina. “Argentina, on the other hand, is likely to be a strong competition to Ukraine given the price benefit,” Ammerman said.

However, corn crop conditions in Argentina have been deteriorating due to dry and hot weather conditions and only 58% crop was reported to be in good to excellent conditions as of Dec. 30, according to Buenos Aires Grains Exchange, or BAGE.

Even though some rains are expected in the coming weeks, the Argentinian corn production in MY 2021-22 may decrease from the current estimates of 57 million mt by BAGE and 54.5 million mt by USDA. This is expected to support prices.

The higher cost of fertilizers worldwide is going to add to the production cost for corn, and potentially to prices, sources said, although the impact may be limited, they added.

In Ukraine, the cost of growing corn will probably grow by around 30%, sources said, leading to some reductions in fertilizer usage.