The global coal market cannot scale up to supply Russia’s European customers, top coal producers said recently, which is reflected in coal prices and may hasten coal-fired generation retirements, especially in light of federal plans that would discourage coal burning.

‘’The international market is about 1.2 billion [metric tons] a year, and that includes all types of quality of coal,” said Paul Vining, board chairman at Westmoreland Mining, the oldest independent coal company in the US, based in Colorado Springs, Colorado. “Out of 1.2 billion, Russia is about 240 or 250 million [mt], so it’s about 20% or so of that.”

China and India may increase their demand for Russian coal, and some smaller coal consumers may increase their demand, Vining said during a March 10 panel discussion at CERAWeek by S&P Global in Houston. However, the international coal market could still be at least 120 million mt short of its typical demand, both in terms of metallurgical and thermal coal, “where the elasticity in this industry has all but disappeared.”

About 80% of coal producers have gone through bankruptcy and have had to cut back investment in production in order to shore up their balance sheets, Vining said the panel. Several large mining companies have exited the coal business altogether, some have converted mining sites to renewable power.

“You’ll see those kinds of policies and moves on the part of large companies that have the balance sheet and the capability that are not going to invest in this space any more,” Vining said.

Furthermore, large power producers have been converting coal-fired generation either to the use of natural gas or to renewable power sites.

“At a macro level, there is no stretch in the rubber band when it comes to coal supply worldwide,” Vining said.

Jim Grech, president and CEO of Peabody Energy, the world’s largest private sector coal company, based in St. Louis, Missouri, said, “From an energy perspective, what we’re learning is how interconnected the energy and commodity markets of the world are, and how a ripple in one part of the world can be felt elsewhere.”

During a separate CERAWeek presentation, US Environmental Protection Agency Administrator Michael Regan said his agency is coordinating efforts with the US Department of Energy and the Federal Energy Regulatory Commission to present a “full suite of opportunities that marry a range of EPA authorities” designed to reduce emissions from power plants, which he described as the nation’s “largest stationary source of harmful pollutants like nitrous oxide and sulfur dioxide.”

“An integrated and coordinated approach allow us to tackle the full array of threats power plants pose to clean air, safe water and healthy land,” Regan said, adding that he recently signed a proposed plan to cut pollution from power plants and industrial sources “that significantly contribute to unhealthy levels of smog for over a million Americans who live downwind.” 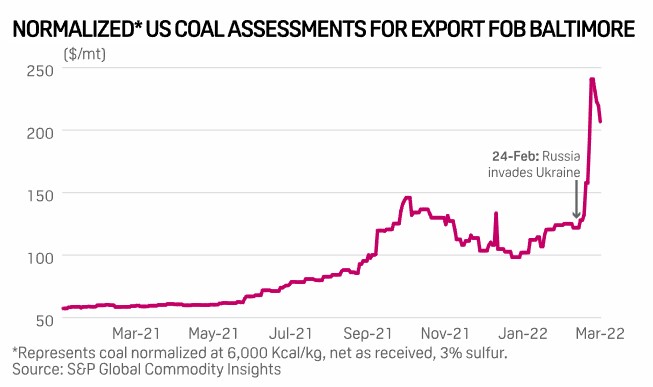 In the spring, the EPA will release a white paper summarizing best available practices on controlling greenhouse gas emissions from new natural gas combustion turbines, followed later in the year with “a fresh look at our options for reducing carbon emissions from both new and existing power plants.”

Speaking to the energy industry audience, Regan said, “Thanks to the leadership in this very sector and the EPA’s regulations working side by side, a zero emissions future is well within our grasp.”

However, Peabody’s Grech said the US energy transition “at a policy level has gotten ahead of the technology.”

Carbon capture technology could achieve a balance of achieving all of those goals, Grech said, but the technology may be years away from practicality. Therefore, Peabody on March 1 launched R3 Renewables, a joint venture with Riverstone Credit Partners and Summit Partners Credit Advisors to pursue development of more than 3.3 GW of solar power and 1.6 GW of battery storage over the next give years on land at or near previous coal mining operations in Illinois and Indiana, Grech said.

Such moves may have been in Regan’s mind when he said during his presentation, “Like anyone who wants to be competitive in the future, you are aligning your investments accordingly.”
Source: Platts