U.S. coal miners are experimenting with greener business projects as long-term demand for the carbon-intensive fuel collapses around them.

Creative coal mining companies, flush with cash from a bump in coal prices in 2021, are insulating themselves against future decreased demand by building solar projects on land they hold or setting up carbon sequestration zones. Other companies are burning coal waste or finding new uses for coal that can feed the energy transition. One company, Hallador Energy Co., appears to be trying to have it both ways, promising to build a solar facility as soon as it retires a coal power plant it recently purchased.

With companies across the economy seeking to cut their carbon emissions while renewable power and natural gas power undercut coal power on price, the long-term trend has been toward lower coal consumption. As recently as 2014, the nation’s coal companies mined about a billion tons of coal in a year, compared to an estimated 578 million tons in 2021 as the fuel was replaced by natural gas and renewable energy. Despite the uptick in demand in 2021, companies remain hesitant to invest in additional coal capacity.

“I think it’s really just the longer we go, the more even the most resistant companies have to start thinking about a pivot,” said Robert Godby, an energy economist and interim dean of the University of Wyoming College of Business. “I mean, how will they stay in business?”

U.S. coal generation accounted for 23% of the utility-scale electricity produced in the U.S. in 2021, down more than half from 52% in 1990. The U.S. Energy Information Administration forecasts coal’s share of power generation will fall by a percentage point in both 2022 and 2023. Just a few years down the road in 2028, utilities have scheduled a record-high 23.3 GW of U.S. coal-fired capacity retirements, according to a recent analysis of S&P Global Market Intelligence data. 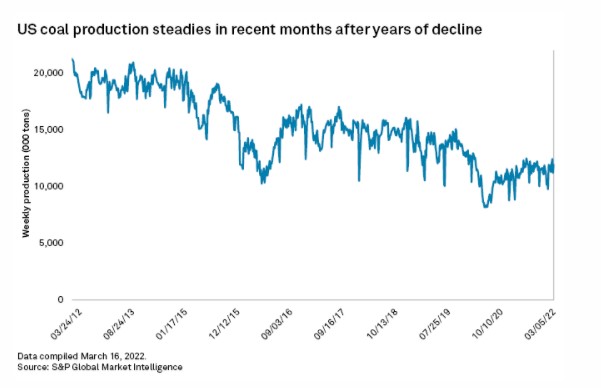 On March 1, coal mining giant Peabody Energy Corp. outlined plans to pursue 3.3 GW of utility-scale solar capacity and 1.6 GW of battery storage capacity within five years through a joint venture with Riverstone Credit Partners and Summit Partners Credit Advisors LP. The developments are planned at the company’s former mining sites in Indiana and Illinois and would be the largest solar and battery storage projects in either state.

The coal miner watched its prospects collapse in recent years. Peabody sold 249.8 million tons of coal in 2014, but seven years and a bankruptcy reorganization later, its coal sales volumes dropped 47.9% to 130.1 million tons in 2021.

“This is a company that has been a coal company its entire existence,” said Shannon Anderson, a staff attorney and organizer with Wyoming conservation group Powder River Basin Resource Council. “That’s a huge announcement. It’s just a lot of solar. It looks like they’re going all in, which is just fascinating.” 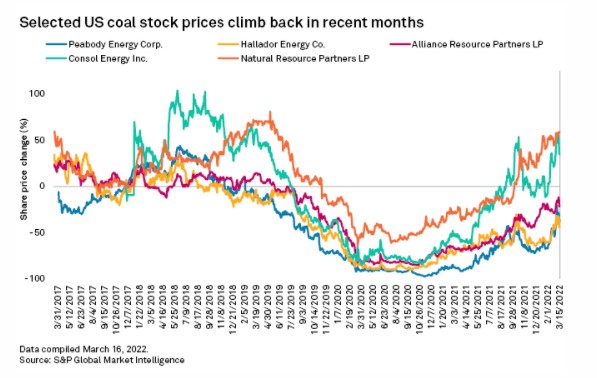 The project, deemed R3 Renewables LLC, is developing six potential areas on or near former coal mining sites close to a grid injection point. In a survey of renewable power developers by LevelTen Energy in late 2021, 89% counted “interconnection timelines and costs” among the greatest barriers to deploying more solar energy.

Owning property with infrastructure already in place puts Peabody in a unique position for diversifying into cleaner energy.

“If you’ve got all the ingredients to make a cake, you might as well make a cake,” Godby said.

Peabody did not respond to a request for comment for this story, but President and CEO Jim Grech said in a March 1 presentation that the company is developing a pipeline of projects to meet its emission reduction goals through existing assets and new technology, while embracing the world’s transition to net-zero emissions.

Grech took the helm of the company in early 2021. Bruce Nilles, executive director of Climate Imperative, said the executive appears to be taking a “clear-eyed look” at Peabody’s assets rather than focusing solely on its coal mining legacy.

“No one’s going to protest about turning a coal mine into a solar farm,” Nilles said. “The politics in Indiana are still tough. Having a large coal producer say, ‘Now we’re diversifying’ is just enormously helpful for getting us out of this era of ‘for coal’ or against it.”

The company recently started publicly talking about work to identify alternative revenue sources across its portfolio of minerals, timber and land. Most of the projects would require little to no capital investment from the partnership. In the fourth quarter of 2021, Natural Resource Partners closed a $14 million deal to sequester about 1 million tonnes of carbon dioxide in West Virginia forest land. More recently, Natural Resource Partners struck a deal to evaluate the potential development of a carbon dioxide sequestration project that could store over 300 million tonnes of CO2 underground in southwest Alabama.

Pennsylvania-based coal miner Consol Energy Inc. is also dabbling in power generation. The company is designing a 300-MW power plant equipped with carbon capture that would burn coal waste from its Pennsylvania mining complex. The project is backed by the U.S. Department of Energy, which selected the company to receive part of an $80 million grant.
“We feel we have an important role to play in continuing to provide a secure, stable and reliable source of energy that continues to facilitate expanded access to electricity and improve lives on a global scale,” Consol wrote in an email.

Old coal, new uses
Other companies want to use coal in new ways. Ramaco Carbon LLC is developing a site to convert coal into products such as carbon fiber for automobile parts. Consol has a 25% equity interest in CFOAM LLC, a West Virginia company that produces carbon foam used in applications such as thermal insulation and fireproofing. The Pennsylvania coal producer said it is also working with other parties including Ohio University to explore “new, sustainable markets for U.S. coal.”

American Resources Corp., which grew by buying up distressed coal properties, has also been developing a technology process chain to capture, process and purify rare earth elements that are essential to multiple applications including renewable energy and battery storage technology. Several of the larger, publicly traded U.S. coal companies, including Arch Resources Inc. and Alpha Metallurgical Resources Inc., were already shifting away from coal used in power generation to focus on mining metallurgical-grade coal used to make steel, to tie their visions of the future to rising demand for things such as wind turbines or electric vehicles.

Executives with Alliance Resource Partners LP, a large Tulsa-based coal producer, have said the company is assessing various non-fossil opportunities, but it has also expanded in recent years into oil and gas mineral interests in the Permian, Anadarko and Williston basins in the U.S.

Indiana-based coal producer Hallador decided vertical integration would help it stave off financial problems, and it announced plans in February to acquire the Merom Generating Station in return for taking on millions of dollars in decommissioning costs and environmental responsibilities. The plant had been scheduled to retire in May 2023, but Hallador said the plant can secure demand for up to half of its coal production for “years to come.” The deal includes a 3.5-year power purchase agreement with Hoosier Energy Rural Electric Cooperative Inc., the plant’s seller.

“It’s doubling down on coal,” said Seth Feaster, an analyst at the Institute for Energy Economics and Financial Analysis. While the move offers Hallador some control over one of its customers, such plans would not likely be scalable to much of the industry, the analyst added.

The company had announced plans in June 2021 to develop up to 1,000 MW of renewable energy to replace the plant. In a statement accompanying the announcement, Hallador President and CEO Brent Bilsland said renewable energy “is the natural next step in the company’s evolution.”

Hallador’s agreement to develop renewable energy remains in place but will not begin until the coal plant is retired. Hallador did not respond to a request for comment.