The recent US data has been mixed and that has helped to fuel fears that the economy could experience a marked slowdown, especially with the Federal Reserve firmly focused on inflation and hiking interest rates. Dollar strength is acting as a further headwind to growth by making US exports less price competitive in what is already a challenging external demand environment for companies.

In this regard this morning’s National Federation of Independent Business survey for April was marginally better than expected at the headline level with optimism holding steady versus expectations of a fourth consecutive monthly drop. Nonetheless it is still the weakest level since April 2020 in the immediate aftermath of the pandemic striking. The details show a slight improvement in the proportion of small businesses expecting higher sales, but there was a little more pessimism on the outlook for the economy and whether it was a good time to expand.

Set against this softer environment, firms are still struggling with worker shortages and are desperate to hire. The NFIB released the labour components last Thursday, which a net 46% having raised worker compensation during the past 3 months and 27% expecting to do so further. 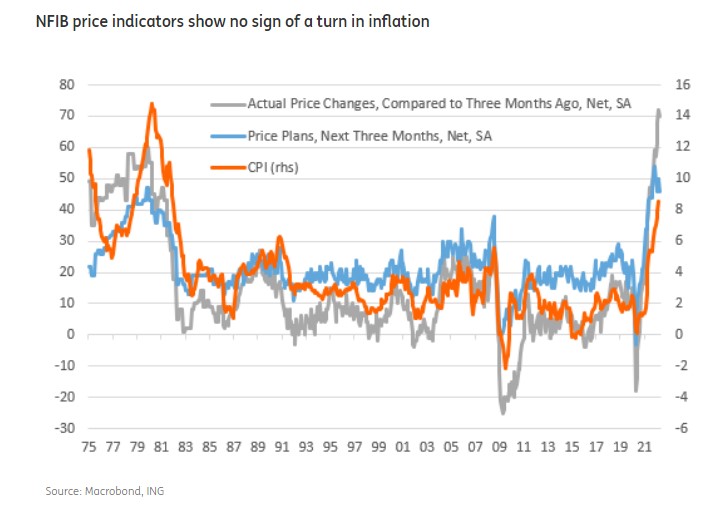 Looking to tomorrow’s inflation data the NFIB report shows a net 70% of companies raised their selling prices in the past 3 month – down from last month’s 72% balance, but this is still the second highest reading in the survey’s 47-year history. Moreover, a net 46% of firms plan to raise their prices further over the next three months (down from 50%, but this is still the 6th highest reading in the survey’s history). This reinforces the message the despite concerns about where the economy is heading, businesses continue to have pricing power and highlights the breadth of inflation pressures in the economy. The ability to raise prices is seen across all sectors and all sizes of businesses

Inflation may be peaking, but 2% is a long way away

Tomorrow’s CPI report will probably show that inflation has passed the peak, due largely to lower used car prices, but in the absence of major improvements in supply chains and geopolitical tensions, the descent to the 2% target will be very slow and may not be achieved until the very end of 2023. However, with national gasoline prices hitting a new all-time high yesterday that will come as little comfort to most households.
Source: ING