With just a few years gone past since the opening of the US crude exports market, it has already managed to become one of the most important drivers of crude tanker demand. In its latest weekly report, shipbroker Gibson said that “without a doubt, the key driver of the growth in crude tanker demand this year has been US crude exports. Aframaxes have been by far the biggest beneficiaries of rising exports, both in terms of STS demand and actual trading. Volumes traded on Aframaxes averaged around 1.15 million b/d in Q3, up by 0.45 million b/d from Q1 levels, according to ClipperData. The biggest gains were seen in trade to Europe, although higher volumes have also been shipped to Canada. Surprisingly, there also has been an increase in trade to the Caribbean, an unintended consequence of US sanctions placed on Venezuela. Suezmaxes have seen much smaller gains. Here, exports averaged around 550,000 b/d between July and September, up by just 50,000 b/d compared to the 1st three months of this year. The picture is different for VLCCs. US crude exports on very large crude carriers peaked during the 1st quarter of this year, at around 1.15 million b/d, but shipments eased back afterwards, averaging just 0.95 million b/d during Q3, the lowest level since late 2018. This decline is largely due to the near disappearance of China from the US crude export market. However, despite the US trend, VLCCs are benefitting from more long-haul trade out of Latin America (and plenty of other factors right now!)” 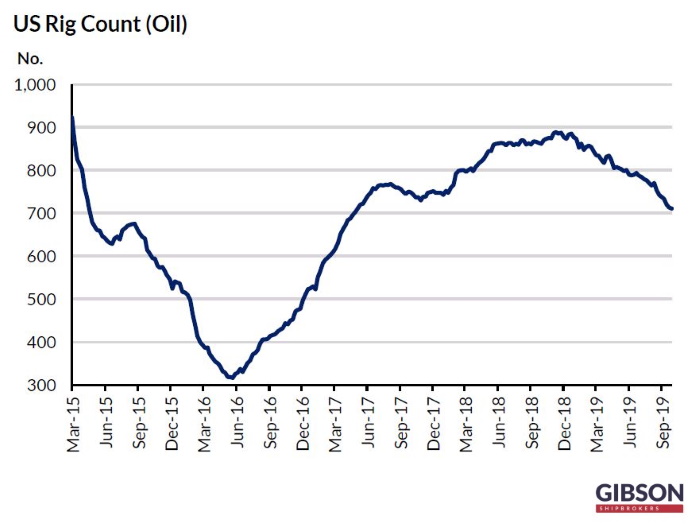 According to Gibson, “going forward, large scale pipeline capacity additions from the Permian Basin to the US Gulf suggest further growth in crude exports. As reported previously, commercial operations have already began on the 670,000 b/d Cactus II and the 400,000 b/d EPIC pipeline. Testing is also underway on the new 900,000 b/d Grey Oak pipeline, with commercial deliveries expected to begin in the 4th quarter of the year. As such, we are likely to see further growth in exports in Q4 2019 and throughout 2020. Longer term, more pipelines are planned. Jupiter reportedly secured financing for a proposed 1 million b/d pipeline to the Port of Brownsville. ExxonMobil together with Plains All American announced a construction of another 1 million b/d pipeline to the Texas Gulf Coast. Enterprise also reported plans for a further expansion of the Midland to ECHO pipeline system, with initial capacity of 450,000 b/d. All projects are expected to start operations in the 1st half of 2021. As VLCC port infrastructure lags behind pipeline developments, until we see new terminals capable of loading a full VLCC cargo, it will be smaller crude tonnage that will benefit the most from rising crude exports”. 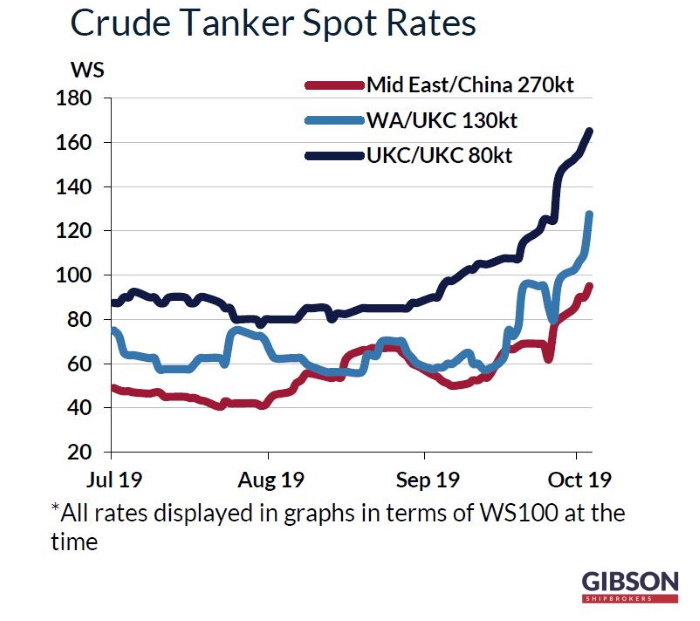 The shipbroker added that “however, for these expectations to materialise, we need to see continued growth in US crude output. The latest EIA figures suggest domestic production could increase by over 0.85 million b/d in Q4 from the average level so far this year. In 2020, US crude output is anticipated to rise by another 0.9 million b/d. Yet, there are clouds gathering over the longerterm horizon. Oil prices have generally remained under pressure this year, while performance of small/medium sized shale producers has been disappointing. The number of active oil rigs in the US has been in steady decline since late 2018, falling in early October to its lowest level since May 2017. Perhaps these factors are behind the EIA’s surprising downward revision of US oil production, with the agency expecting domestic oil supply to decline by 0.4 million b/d year-on-year in 2021 in its latest international energy outlook. However, despite these concerns the prevailing view is still for a further growth beyond 2020. In recent years, there have been significant increases in rig productivity on the back of technological advancements. For example, instead of using several separate drilling rigs to exploit reserves, frackers are using one drilling rig to drill multiple wells from the same location. It remains to be seen what forecast proves to be correct. However, the importance of continued growth in US crude exports cannot be overstated. It is indeed something that we as an industry need to keep a keen eye on”, Gibson concluded.
Nikos Roussanoglou, Hellenic Shipping News Worldwide