The US exported more than 3 million b/d of crude for the second week in a row in the week ended June 7, aided by macroeconomic factors that have made US oil prices more attractive.

At least 4 million barrels loaded last week are destined for delivery to India, including one VLCC cargo that was loaded June 4 on to the tanker New Prime at the Louisiana Offshore Oil Port. New Prime was chartered by Shell for the voyage, according to Platts’ fixtures reports.

It was not the only VLCC that loaded at LOOP last week. A second ship, the Captain X Kyriakou, chartered by Mercuria, was loaded and sailed from LOOP on June 2. That cargo of US crude is expected to be delivered to South Korea, according to Platts trade flow software cFlow.

LOOP has rarely loaded two cargoes in one week since it began exports more than one year ago. The offshore facility typically loads about one cargo a month for export, and has the capacity to load some 900,000 b/d, according to company officials. LOOP declined to comment on the recent loadings.

The two VLCCs that loaded last week join another LOOP loading noticed in recent weeks. Coswisdom Lake sailed from LOOP on May 31 and is destined for Qingdao, China.

The US’ four-week crude oil exports average is 3.221 million b/d. It’s the first time that the four-week average has reached over 3 million b/d since March, according to EIA data. Various factors encourage and limit US crude exports. However, it is expected that more US crude will be exported in coming years as US production increases and infrastructure along the US Gulf Coast is expanded. Currently, the US Gulf Coast has the capacity to handle some 5.92 million b/d of crude.

Macro factors favor exports
US crude for export has benefited over the past four weeks from certain macroeconomic and geopolitical factors that have helped widen the Brent/WTI spread. Over the last four weeks, the Brent/WTI swap spread, an indicator of the competitiveness of WTI-based crudes versus their Brent-based counterparts, has averaged $8.23/b. In the four weeks prior, the swap spread averaged $7.71/b, while the four further weeks prior, the swap spread average $7.15/b. 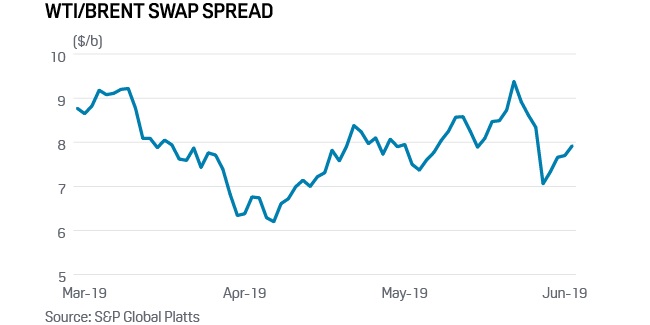 A widening swap spread is indicative of WTI-based crudes becoming more competitive in comparison to their Brent-based peers.

The factors affecting the Brent/WTI spread can be placed into two categories: demand-side and supply-side. On the demand side, lingering US-China trade tensions have created fear of an overall slowing of the global economy. Any dip in demand growth spurred by a cooling relationship between the world’s two largest economies has potential to disrupt global supply chains and investment.

US-China trade tensions have contributed to an overarching decline in momentum for European and Asian markets. Business confidence has weakened and economic indicators ranging from car production in Germany, investment in Italy, and external demand in emerging Asia have all been lackluster.

US crude oil stocks and OPEC-plus production cuts have driven supply-side concerns in the global oil complex. US crude stocks have trended upwards in 2019, with stocks climbing 6.77 million barrels in the week ending on May 31, and up nearly 40 million barrels since the start of the year, according to data from the EIA. With US crude production at record levels, and production in the Permian Basin forecast to grow 26% year over year in 2019, the global market is a natural outlet for the new barrels.

OPEC and partners, Russia in particular, sought to bring nearly 1.2 million b/d off the global market in the first half of 2019, a goal they accomplished and passed by 300,000 b/d in March. As a continuation of OPEC cuts is expected, and Saudi oil output at a four-and-a-half year low, US crude exporters are well positioned to grow market share.

WTI FOB with a loading window from June 22 to July 22 was assessed by S&P Global Platts on June 7 at a $7.30/b premium to the WTI strip. That represents a 31 cents/b premium to July barrels of WTI at the Magellan East Houston Terminal.
Source: Platts

Stolt-Nielsen: Going for a three-peat