Home / Oil & Energy / Oil & Companies News / US EIA sees summer fuel prices at eight-year high, but relief may be on the horizon

US EIA sees summer fuel prices at eight-year high, but relief may be on the horizon

US drivers will see fuel prices this summer at their highest levels in eight years, but recent federal actions to quell crude supply disruption concerns as Russia continues its invasion of Ukraine are expected to help put downward pressure on oil prices, the US Energy Information Administration said April 12.

In its summer fuels outlook released alongside the April Short-Term Energy Outlook, the EIA forecast retail gasoline prices over the summer driving season from April through September to average $3.84/gal and retail diesel prices to average $4.57/gal, the highest inflation-adjusted prices for the summer since 2014.

The agency attributed the high prices to economic recovery from the pandemic and increased levels of geopolitical risk that have boosted oil market prices and volatility.

Despite higher prices, the EIA expects both gasoline and diesel consumption to increase this summer, with diesel nearly equaling its pre-pandemic demand level at almost 3.9 million b/d. The EIA put gasoline consumption at 9.2 million b/d, up nearly 1% from last summer but still below the 9.5 million b/d level seen in 2019.

“We expect refinery utilization to continue increasing and remain elevated through the summer as long as crack spreads remain high, which will contribute to gasoline inventories rising above the five-year average by June and to gradually falling prices,” the EIA said.

But the extent to which US refiners can increase the production and export to Europe of distillates, which include diesel and heating oil, “remains uncertain and is likely to affect US diesel prices,” the agency said.

It also stressed a high level of uncertainty in its forecast as the production and availability of Russian crude oil remains a major wildcard, as do actions countries and companies could take in response to Russia’s aggression.

While stronger economic growth typically leads to increased gasoline and diesel demand, high fuel costs could make consumers think twice before hitting the road and the potential for new COVID-19 variants and spikes in cases remains a factor to watch, the EIA said.
Oil price outlook

Weather-related disruptions at Kazakhstan’s Caspian Pipeline Consortium terminal along Russia’s Black Sea Coast and a fire following a Houthi missile attack at a Saudi Aramco oil storage and distribution facility added to volatility and supply risk already heightened by escalating sanctions against Russia and a US import ban on Russian energy products, the EIA said.

But the agency also noted actions that have helped offset these supply disruption risks, including announcements by the US and International Energy Agency to release a combined 240 million barrels of oil from strategic reserves over the next six months. Lockdowns in China following a surge in COVID-19 cases also added demand-side risks that put additional downward pressure on crude oil prices, the agency said. 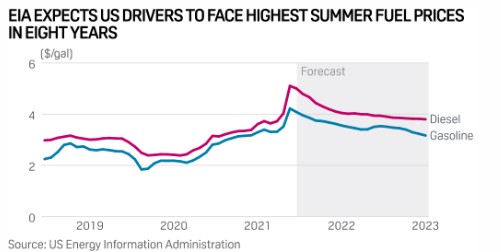 “We forecast that rising consumption, falling oil production in Russia, and the risk of supply outages amid low global inventory levels will support crude oil prices in the coming months,” the agency said. “However, we expect the release of strategic reserves by the US and the IEA will limit upward price pressures.”

The agency forecast oil output in Russia to fall by 1.7 million b/d from February 2022 to the end of 2023, but said that “global oil production will nonetheless increase as a result of higher production elsewhere, mostly from the US and OPEC.” 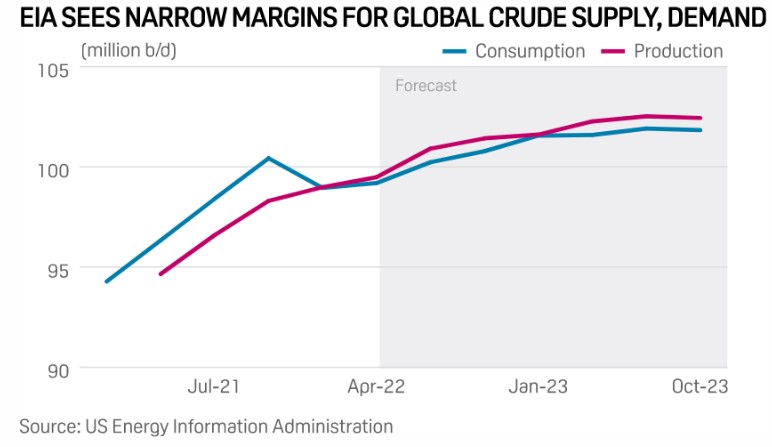 That increased production “will be sufficient to contribute to net global builds in total petroleum inventories in 2Q22, and we expect global inventory to continue to build on a quarterly basis through the end of 2023,” the EIA said.
Source: Platts