A number of highly-levered liquidity strained small energy issuers on Fitch’s Top Bonds (TBOC) and Top Loans of Concern (TLOC) lists remain vulnerable to default, despite our expectation of a significantly lower energy default rate in 2021 relative to 2020, says Fitch Ratings. We project the US energy high-yield (HY) and institutional leveraged loan default rate will decline to 6% and 8%, respectively, this year compared with 14.0% and 19.6% at YE 2020, due to higher oil prices and refinancing of near-term maturities as capital markets reopened in 4Q20.

Liquidity remains a key watch item for the sector as many HY issuers continue to generate negative FCF and find it difficult to execute asset sales. However, large and small energy issuers alike have shifted their focus away from production growth toward FCF generation and debt reduction, lowering capex and targeting debt/EBITDA in the 2.0 to 2.5x range. Significant production curtailments are helping the oil price environment. Current oil and natural gas prices are around $60 per barrel (bbl) and $3 per million British Thermal Units (MMBtu), respectively, compared with average 2020 prices of $39/bbl and $2/MMBtu.

Investors have been willing to lend to companies previously shunned by capital markets due to very low interest rates and a search for yield. However, growing investor interest in environmental, social and governance matters and potential climate policy changes under President Joe Biden could challenge the ability of some energy companies to access capital or sell assets to raise liquidity or refinance debt.

Issuer migration from Fitch’s TBOC and TLOC lists, which consists of those viewed as being at highest risk of default, to our Tier 2 and Radar lists, underscores our expectation of declining default risk in 2021. Since YE 2020, more than a half dozen companies have moved down or were removed from these lists, supporting our view of lower energy defaults in 2021. NGL Energy Partners, which launched a $2.1 billion secured debt offering in late January to refinance existing debt, is an example.

Energy currently represents 28% of the $23.6 billion of volume on Fitch’s TBOC list, the most of any sector but is down from 54% in October 2020. Peak energy volume on Fitch’s TBOC list was $30.3 billion in May 2020, compared with $6.5 billion currently, as most of the very large issuers; including Chesapeake Energy, Ferrellgas Partners, California Resources and Gulfport Energy, previously on the list have already filed for bankruptcy.

The decline in overall default risk for the sector was due to refinancing activity and distressed debt exchange (DDE) activity in 2020. DDEs, which are considered Restricted Defaults per Fitch’s Distressed Debt Exchange Rating Criteria, occurring in 2020 reduce the likelihood of further defaults for issuers completing them in 2021. HY issuers SM Energy (CCC+) and Nabors (CCC+) are examples of companies that completed DDEs last year. Only 2% of the $40.0 billion of the volume on Fitch’s TLOC list is from energy. 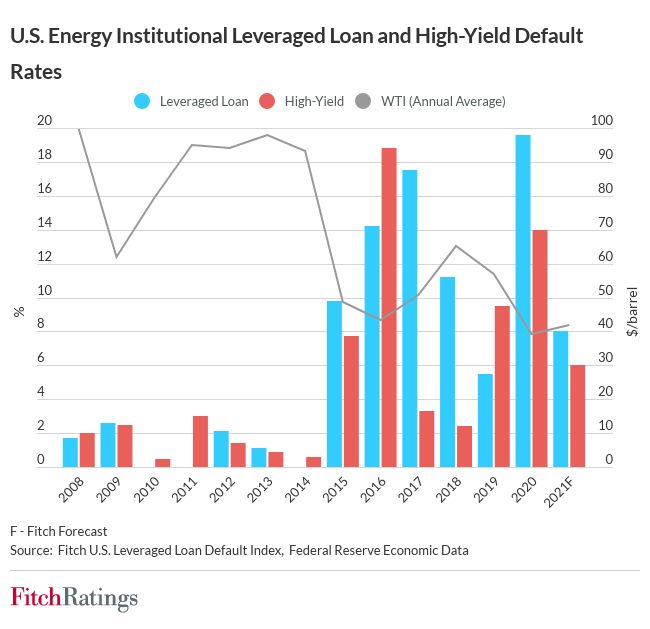