Freeport LNG is sticking to its target for resuming production in the second half of January, despite growing anticipation among market participants that the operator faces further delays with federal regulators yet to formally sign off on restarting the offline Texas facility.

According to three LNG market participants, Freeport LNG was heard to be preparing to delay restart into February or March. That would not be a surprise, the market participants said, because of the regulatory approval needed for the operator to resume production. The three-train, 15 million mt/year capacity terminal south of Houston has been offline since an explosion and fire June 8, 2022.

Analysts at Webber Research & Advisory also expected delays in the operator’s efforts to resume production at the terminal, citing evidence including a lack of a formal reply from the US Federal Energy Regulatory Commission to Freeport’s responses to some 64 detailed questions that the agency posed in mid-December 2022. Freeport is required to respond to the list of requirements before it can restart. 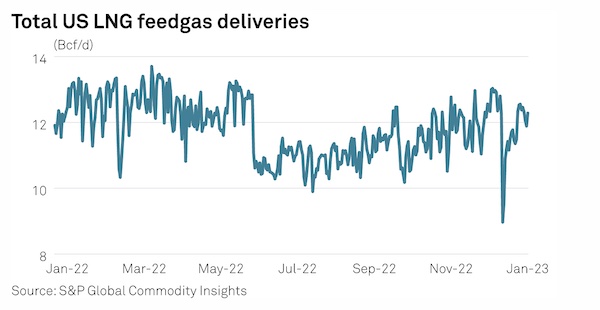 “We found more evidence to suggest further delays to FLNG restarting their facility than hitting their goal of starting back up in January 2023,” analysts led by Michael Webber, managing partner of the investment research firm, said in a note to clients.

“We are still targeting second half of this month for the safe, initial restart of our liquefaction facility, pending regulatory approvals,” Heather Browne, Freeport’s director of corporate communications, said in a Jan. 12 email.

As of Jan. 12, the US Pipeline and Hazardous Materials Safety Administration had not yet received a request from Freeport LNG to restart production at the facility, according to the agency.

Potential further delays in Freeport’s startup were not expected to lift LNG prices in the near term, with mild winter weather in Europe keeping a lid on demand. The delivered price of LNG into Northwest Europe dropped to a new eight-month low Jan. 11 as bearish sentiment continued amid an oversupplied Atlantic cargo market. Robust gas inventories were stuck at around 83% full. The market, meanwhile, was awash in LNG supplies, while wind output was above normal, sharply so in the UK.

Freeport was on track to receive some 102 MMcf/d of feedgas on Jan. 12 based on nominations for the morning cycle that could later be revised, although the reason for the uptick in flows was not immediately clear. Freeport also takes deliveries of feedgas to generate power.

Freeport’s announcement of its most recent target on Dec. 23, 2022, followed predictions of delays by some market observers after FERC sent the operator the extensive information request stemming from a joint site visit by regulators, review of the facility conditions and steps needed to restart operation.

A root cause analysis, released in redacted form by PHMSA on Nov. 15, 2022, identified overpressure of an LNG piping segment as a direct cause of the explosion and fire. The analysis, done for Freeport LNG by the consultancy IFO Group, also pointed to flawed operating and testing procedures and operator fatigue as areas of concern. Freeport told FERC in late December 2022 that it would implement remedial actions for every recommendation by IFO Group, which included a series of operational improvements.

Webber Research said Freeport should be able to start up within one month of receiving FERC’s approval, but the analysts said they believed the operator and FERC “are in the middle, not end of the documentation process.”

“When will Freeport be fully back in-service?” Webber Research said. “The exact answer is hard to predict based on the sheer volume of data [that] is excluded from public view. However, we would take the over on a March 15th, 2023 start-up, particularly given the time FERC may need to approve the confidential docs and as-built engineering drawings provided a few weeks ago.”
Source: Platts