Offshore oil and natural gas production rose on Wednesday, after Hurricane Ida disrupted production in the US Gulf, according to the US Bureau of Safety and Environmental Enforcement (BSEE).

The percentage of offshore oil production that remains shut in dropped to 80%, down from nearly 94% on Tuesday.

Meanwhile, 83% of natural gas production in the US Gulf remains shut in, dropping from 94%.

The following shows the number of platforms and rigs evacuated, including the total of oil and natural gas that has been shut in.

US major oil companies with assets in the Gulf of Mexico continue to assess the integrity of their platforms and facilities. 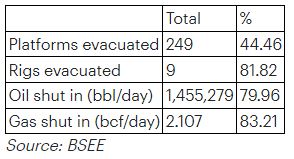 Chevron conducted overflights to assess its facilities and said its assets appear to be undamaged by Hurricane Ida. It has also begun to conduct closer assessments of facilities where it is safe to do so and to restore production where able.

Shell conducted a flyover for initial assessments of assets in the impacted area. Mars, Olympus and Ursa are all intact and on location.

Its floating production storage and offloading vessel, the Turritella, has resumed production. Its Perdido asset in the southwestern Gulf of Mexico remained online through Hurricane Ida.

All other assets remain shut in and fully evacuated, the company said.

BP production remains shut in as well. It said production at its Gulf platforms will remain shut in until the company receives confirmation that its infrastructure is safe to operate and offshore pipeline companies have confirmed operability.

The following shows the status of the chemical plants and refineries affected by Ida. 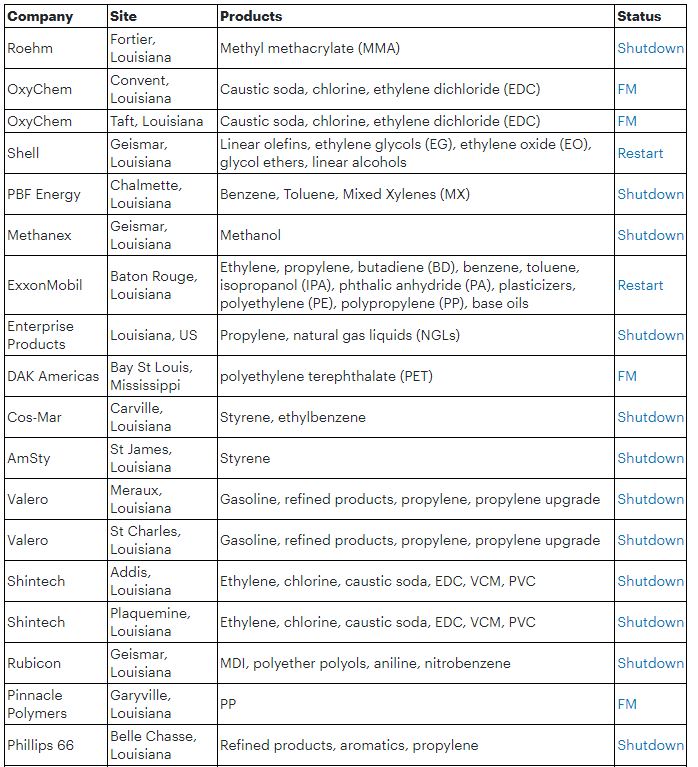 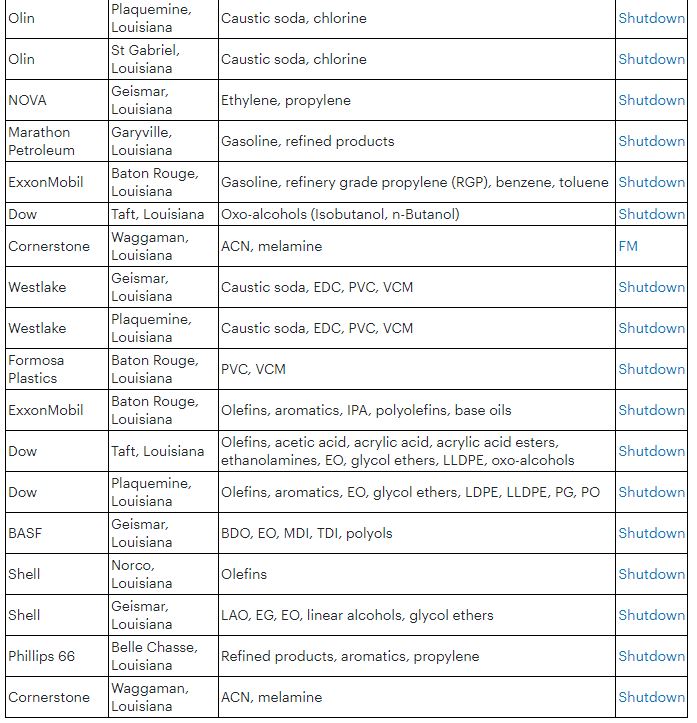 More than 860,000 customers remain without power in Louisiana and Mississippi as regional power distributor Entergy continues to restore electrical service where it is safe to do so.

Entergy said that while initial service can be provided to some customers, the full restoration will still take time given the significant damage across the region.

Those in the hardest-hit areas could experience power outages for weeks, the company said.

Seven refineries in the state remain shut, according to the US Department of Energy (DOE), making up about 9% of total US operable capacity.

Damage assessments are underway at some refineries, but operations cannot restart until feedstock supply, power, and other essential third-party utilities are restored.

Two refineries in the Baton Rouge, Louisiana area began restart processes on Tuesday, the DOE said, but it could be several days before they are operating at full rates.

Some chemicals shipped by barge on the Mississippi river are likely to be delayed following damage caused by Hurricane Ida.

Major carrier American Commercial Barge Line (ACBL) said it is working with the US Coast Guard and local authorities to assess the situation.

“Transit delays are to be expected well into September as boats, fleets, terminals and shipyards recover from this hurricane,” ACBL said.

The US Coast Guard required the evacuation of fleets below Belle Chasse, Louisiana, an action that was not taken during any of the storms in 2020, ACBL said.

Market participants told ICIS that barges of ethylene glycols (EG) from the US Gulf to the Midwest are delayed as a result of the river closures.

The Coast Guard is currently in the process of finalising plans for the reopening of the Mississippi river.

Ports impacted by Hurricane Ida are beginning to reopen, although the New Orleans ports remain closed.

The Louisiana Offshore Oil Port (LOOP) has paused deliveries of crude until Hurricane Ida subsides, it said on Sunday. 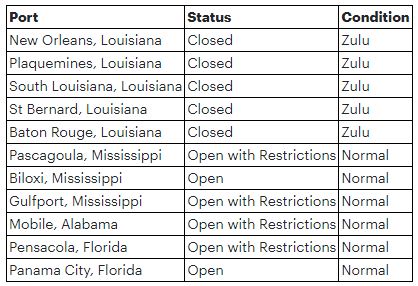 It continues to implement its inclement weather plan and is working directly with shippers to minimiSe shipper storm related impacts.

Facility assessments are being conducted.

Union Pacific (UP) said on Wednesday that its rail line between St James, Louisiana, and New Orleans remains closed, making it one of three lines in the state that are out of service because of Hurricane Ida.

It expects the line should open by Thursday morning.

Most of the company’s network has returned to service, except for that one line, Union Pacific said. The company is clearing debris from its track and installing generators in parts that lack commercial power.

For Kansas City Southern, its line from New Orleans to Baton Rouge remains closed. It has restored service in its Gulfport subdivision in Mississippi state.

On Sunday, BNSF said its main line between Lafayette, Louisiana and New Orleans was out of service.

CSX said it is repairing its track and signals on the New Orleans and Mobil subdivision. Shipments on the southeastern portion of the CSX network could be delayed.

The New Orleans Flood Protection Authority has closed the area’s floodgates, which disrupted all eastward and westward rail routes going through New Orleans, including interchange routes on other carriers.

Norfolk Southern said its intermodal terminal in New Orleans will remain closed through Wednesday. However, it could resume interchange operations as soon as Thursday.

Union Pacific confirmed that its New Orleans interchange route with Norfolk Southern could open on Thursday. Interchanges with other eastern carriers over New Orleans are under embargo, and Union Pacific is working with those carriers to reroute rail traffic.

Norfolk Southern’s mainline route into New Orleans is open, it said. It has resumed local operations in Mobil, Alabama and New Orleans.

The property data firm CoreLogic said on Wednesday that losses to both residential and commercial properties are estimated to be $27bn- $40bn in Louisiana, Mississippi and Alabama.

Insured flood loss for commercial and residential properties in these states is estimated to total $6bn-$9bn, which includes storm surge and inland flooding. Uninsured loss in this area is estimated to be $8bn-$12bn.

More than 90% of the losses are estimated to be in Louisiana, primarily in the nine parishes in the New Orleans-Metairie-Hammond metropolitan area and in the Ascension, Lafourche, Livingston and Terrebonne parishes immediately to the west.
Source: ICIS by Janet Miranda https://www.icis.com/explore/resources/news/2021/09/01/10680463/us-gulf-oil-natgas-production-rises-after-hurricane-ida