Northern Europe is set to receive its first LNG cargoes from the US Sabine Pass export facility on 7 June. Eight cargoes from the Louisiana liquefaction project have previously been delivered to southern Europe – to Portugal, Spain and Italy – but none have yet been received in the more liquid and competitive trading hubs of northwest Europe.

These first cargoes do not signal an immediate upheaval for European gas markets, as netback indicators do not yet predict northern Europe as the preferred destination for US sellers, and the price impact of new US gas production has already fed into the market over several years.

US LNG for the Netherlands and Poland

The Dutch Gate LNG terminal and the Polish Swinoujscie LNG terminal are both set to receive cargoes of US-produced LNG on 7 June, according to global industry intelligence platform LNG Edge. Despite being the first cargoes to reach northern Europe from Sabine Pass, specific drivers for these two deliveries suggest they do not yet herald a wider trend.

The 140,000 cubic metre Arctic Discoverer is a ship belonging to Norwegian producer Statoil and will deliver its US cargo to Gate LNG in Rotterdam. Statoil is a regular supplier to Gate, having delivered four Norwegian cargoes there so far in 2017 and four from Norway in 2016. Statoil has a long-term supply contract with Spain’s Iberdrola, but the Spanish company agreed in 2010 its own deal to supply Denmark’s DONG Energy at Gate, and the Statoil deliveries allow Iberdrola to meet its commitments.

Norway’s own liquefaction plant, the Hammerfest facility in the Arctic, was out of action for planned maintenance between mid-May and mid-June, so according to market sources Statoil has obtained a Sabine Pass cargo from a fellow major oil and gas company as a replacement. Statoil also supplies occasional cargoes to Gate from Trinidad & Tobago, for example aboard the Arctic Discoverer and the Arctic Princess in February and August last year. This means that Statoil’s delivery is best viewed as part of a long-term pattern of deliveries to Gate from across its global portfolio, rather than a specific sign of the profitability of a US LNG delivery to Europe. 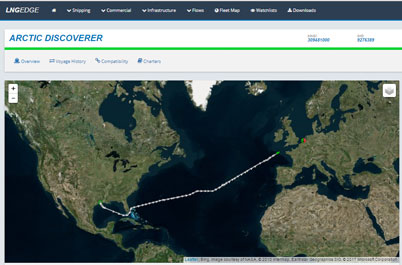 The 162,000cbm Clean Ocean is bringing a spot cargo from Sabine Pass-operator Cheniere Energy to Poland’s incumbent gas supplier PGNiG, in a deal announced by PGNiG in April. Poland used to be reliant on imported pipeline gas from Russia for its annual needs of around 16-17 billion cubic metres (bcm)/year, but opened its LNG terminal at Swinoujscie in 2015 in a bid to diversify its supplies. With the exception of one Norwegian cargo in 2016, all of Poland’s LNG deliveries have been from Qatar, with which the country has a long-term supply contract. Following renegotiations announced in March this year, this deal provides for the supply of LNG equivalent to 2.7bcm/year of pipeline gas from 2018 to 2034.

PGNiG intends to further diversify its supplies and become more active in the global LNG markets. The company opened a trading office in London earlier this year, saying that “due to the increase in LNG supplies led by the US and Australia, we expect LNG to become commercially valuable for Europe.” The first delivery from the US is a clear signal of the company and country’s desire to source new supplies of gas, but does not yet indicate that repeated volumes will head to Europe. 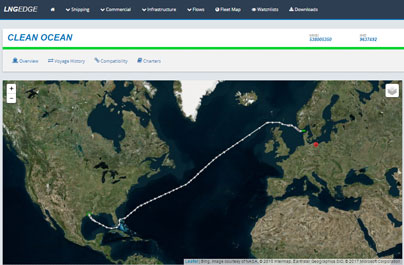 LNG Edge shows the Clean Ocean taking a northerly route to avoid the English Channel on its way to Poland.

A study of current spot market price indications does not show northern Europe as the best destination for spot sales from the US, suggesting that traders with US volumes would generally try to sell into other markets first. Netback prices show the value of an export for a certain producer by subtracting the cost of shipping to a destination from the potential sale price at that destination. Netback values for the US Gulf Coast currently indicate it would be more profitable to sell into South America or the Iberian Peninsula than into northwest Europe. South America has some steady demand at the moment as it moves into its winter season and the shipping cost from the Gulf Coast to South America is low. 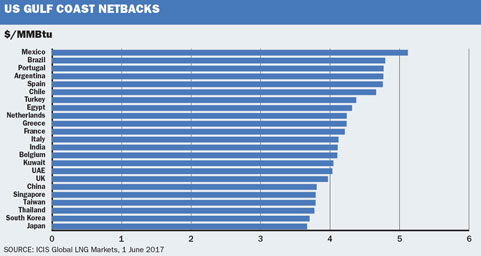 Forward gas prices in northwest Europe, such as on the UK NBP trading hub, are around $5.00-6.00/MMBtu over the next two years. At this level the European market could be uneconomic for US exports under a standard US export formula, based on the US Henry Hub forward curve of around $3.00/MMBtu. A typical export contract from Sabine Pass prices the LNG at around 115% of the Henry Hub price plus a fee of around $3.00/MMBtu. This produces an export price for Sabine Pass offtakers of around $7.00/MMBtu, which is above the gas price in Europe.

However, prices could change significantly over the next two years. Offtakers have also generally committed to paying the fee element under long-term contracts and so may view this as a ‘sunk cost’ that should not be taken into account when deciding whether to lift cargoes. Northern Europe is a highly liquid market, which means it is usually possible to sell volumes if necessary, unlike other markets that may have limited demand.

The Sabine Pass facility started producing LNG cargoes in February 2016 and its export capacity has gradually increased as further production trains were brought onstream over the past year, with a peak of 18 cargoes leaving the plant in May 2017, according to data from LNG Edge. Exports so far have reflected seasonal changes in the global LNG market, with South America receiving the most cargoes during June to September last year, during the South American winter, but East Asia seeing an increase in cargoes during January to March, during the northern hemisphere winter.

The ICIS East Asian Index (EAX) showing the price of spot LNG delivered to east Asia soared to almost $9.50/MMBtu for February delivery due to peak winter demand in the region, and problems at Australia’s Gorgon LNG production facility. Although the South America Index (SAX) gained during this time too, pulled up by the east Asian tightness, the premium on the EAX drew more US cargoes to east Asia. As the markets have moved back into line with each other in recent months, South America has returned to offering the best netback for a US producer, because of the lower shipping cost. The North Europe Index (NEX) has remained below the EAX and SAX across the last year.

Qatar, Algeria and Nigeria were the key suppliers of LNG to Europe in 2016, according to data from LNG Edge, together supplying some 492 cargoes, or 85% of the total cargoes Europe received that year. Peru was the fourth-biggest supplier to Europe last year, as a result of a contract dispute between Peru and Mexico that led to cargoes destined for Mexico heading instead for alternative markets. The US made up only a small part of the mix last year, with three deliveries. The number of US cargoes to Europe will be higher in 2017, but not enough to displace the current top suppliers.

As US LNG export capacity increases in future years, it will have a growing impact on the European market, but current volumes and netbacks mean it is unlikely to cause major shifts in the northern European gas markets this summer. It is also important to note that the US shale gas revolution has been impacting global gas prices, for several years already, regardless of whether US cargoes are physically coming to Europe.

If the US had not increased its own domestic gas production it would now be a growing importer of LNG adding demand and price pressure to the global market. The threat of future competition from US cargoes has also led to Russia improving the terms of its pipeline gas supplies to Europe in an attempt to preserve market share, signalled in particular by an agreement to provide concessions to settle a European Union competition investigation in March this year. 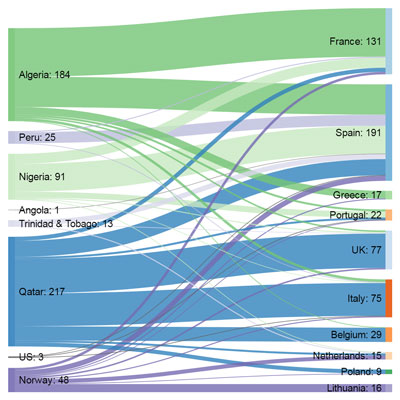 What about the UK?

The UK received the world’s first LNG cargo in 1959 when a test shipment was sent aboard the Methane Pioneer from Louisiana in the US Gulf to a receiving terminal at Canvey Island in Essex. Several further US cargoes were received at the time and the UK then made arrangements to set up long-term LNG deals with Algeria. However the UK became self-sufficient in gas after the discovery of North Sea reserves in the 1960s, and eventually halted imports of LNG until the opening of its Isle of Grain import terminal in July 2005, when the North Sea had started to decline.

The UK now has three LNG import terminals, which receive the bulk of their LNG from Qatar. The UK could potentially receive LNG cargoes from the US this summer. However, it is not the most profitable destination for sellers. Europe as a whole offers lower netbacks for a Gulf Coast producer than South America, and within Europe, the UK is currently priced at a discount to Continental Europe for summer, due to the closure of the UK’s Rough storage facility, which has reduced the country’s demand for gas to be injected into storage.

Petrochemicals company Ineos announced it had imported a cargo of US shale gas to the UK in March 2016, but this was ethane, used as a feedstock for producing chemicals, rather than the methane natural gas used by households for cooking and heating that would be carried on a typical LNG tanker.
Source: ICIS (Alex Froley, LNG Analyst, Global, ICIS) (https://www.icis.com/press-releases/lng-markets-analysis-us-lng-arrivals-in-northern-europe-not-a-signal-of-immediate-change/?cmpid=SOC%7CENER%7CCHHNT-2017-0706-GLOBAL-lng_analysis&sfid=701w00000019R5Q&sfid=701w0000000uPCR&cmpid=SOC%7CLinkedIn%7C%7Csf86053774&cid=sf86053774)

2017-06-08
hellenicshippingnews..
Previous: Iraqi Oil Floods Into U.S. After Saudi Arabia Cuts Back
Next: Qatar Ports Says Most Imports Come From Sea, Not Land Border With Saudi