US LNG feegas demand fell by nearly 1 Bcf/d Nov. 29 as fog forced pilots that direct tankers along the channel feeding the largest US liquefaction facility to restrict service.

Outbound traffic in the channel that includes Cheniere Energy’s Sabine Pass export terminal in southwestern Louisiana was expected to pick up by Nov. 30 once the fog lifts, according to a notice to shippers.

Based on nominations for the morning cycle, total US LNG feedgas demand stood at 10.65 Bcf/d Nov. 29, down about 911 MMcf/d from Nov. 28, according to data from S&P Global Commodity Insights. 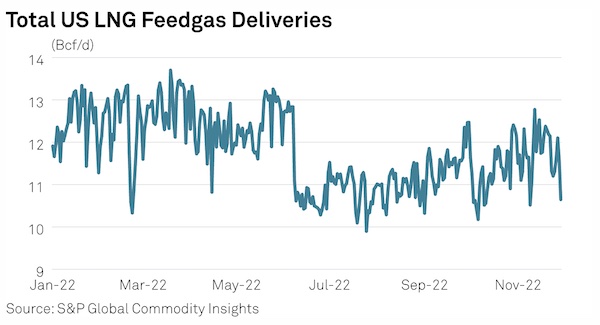 The decline was driven by the dropoff in utilization at Sabine Pass, despite flows to Venture Global’s Calcasieu Pass export terminal reaching a record high of 1.89 Bcf/d. Pilots reported that outbound traffic for large vessels was restricted along the channel that feeds Sabine Pass from the afternoon of Nov. 28, with fog expected to persist until the Nov. 30. Two unladen LNG tankers — the Energy Pacific and the Seapeak Catalunya — were docked at the Sabine Pass facility Nov. 29, after arriving the previous day, according to Platts cFlow ship and commodity tracking software from S&P Global Commodity Insights.

Feedgas demand that has averaged about 11.73 Bcf/d in November may surge over the coming weeks to meet record LNG export demand, with the potential restart of the Freeport LNG terminal by mid-December.

Freeport has been offline since an explosion and fire at the facility in early June. But the president of Freeport offtaker JERA, Satoshi Onoda, said Nov. 29 that the US exporter expects to resume 80% output around its mid-December target and reach full production in March 2023. The capacity of the Freeport terminal is around 2.3 Bcf/d.

The return of Freeport could add further support to strong domestic demand that has seen US natural gas production rise toward record highs in late November. NYMEX Henry Hub futures prices have surged over the past week, pushing the January 2023 contract to over $7.70/MMBtu last week, or its highest in almost 10 weeks, data from Platts and CME Group showed.
Source: Platts