US working natural gas volumes in underground storage dropped by 73 Bcf last week, decreasing by more than the five-year average for only the second time this heating season, while the remaining NYMEX Henry Hub winter strip made modest gains following the number’s release on Thursday morning.

Storage inventories fell to 3.518 Tcf for the week ended December 6, the US Energy Information Administration reported Thursday. The EIA’s estimate just missed an S&P Global Platts’ survey of analysts calling for a 74 Bcf draw. The survey has missed the estimate by an average of 2 Bcf over the past four weeks.

The draw was much stronger than the 19 Bcf pull reported for the week ended November 29.

During the first week of December, population-weighted temperatures across the US dropped 3 degrees. Total demand rose by 8.1 Bcf/d to average 106.7 Bcf/d, according to S&P Global Platts Analytics.

Although the Henry Hub winter strip added several cents following the above-average draw, it remains below the upcoming summer strip. Henry Hub future prices for the balance of the winter dipped below the summer 2020 strip even before peak winter demand starts as supply has outpaced demand by 6.1 Bcf/d so far this winter, doing little to reduce storage inventories, according to Platts Analytics.

Even if the US experiences unseasonably cold winter weather in January and February, it will likely not be enough to offset the storage surplus and production gains. The weight of supply will also eventually erode any premium the 2020 summer strip currently holds compared to the balance of winter 19-20 strip. 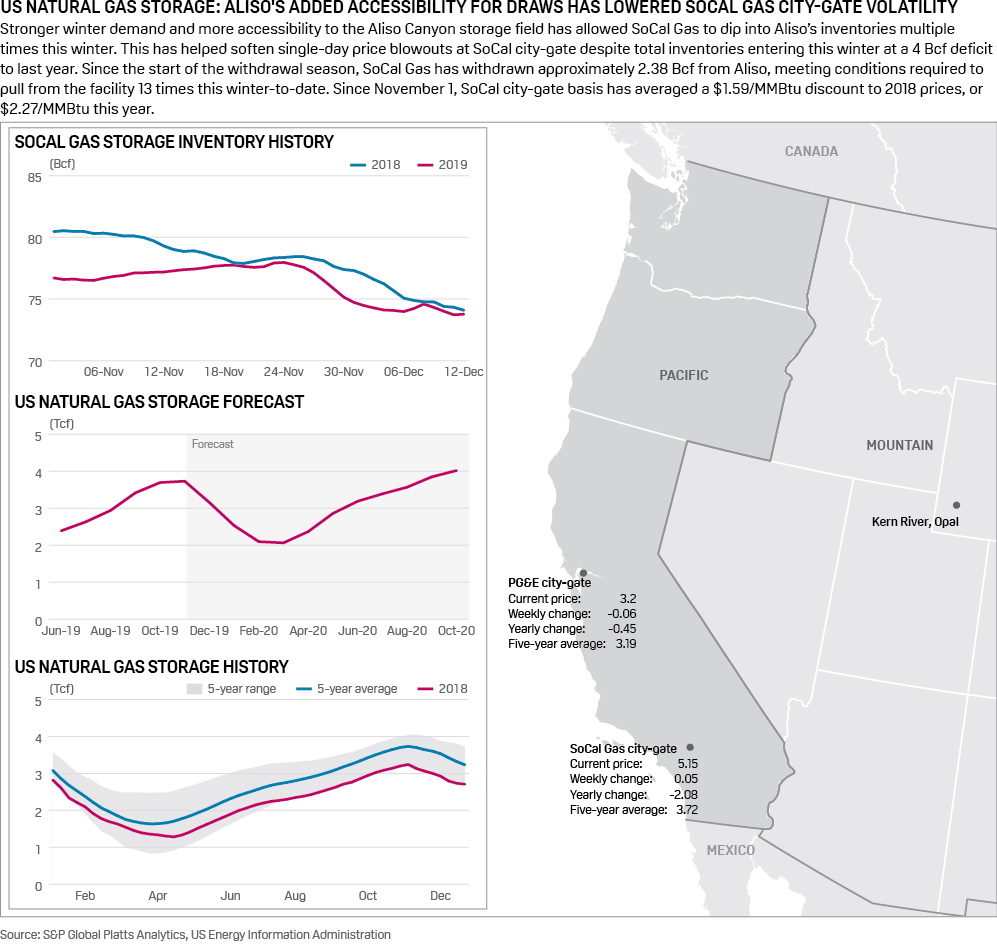 Total supplies for the week in progress are down 700 MMcf/d to average 96 Bcf/d, with a roughly 1 Bcf/d drop in onshore production in Texas and the Northeast partly counteracted by a rise in net Canadian imports.

Downstream, total demand is up 2.3 Bcf/d on the week to average 109 Bcf/d, with gains driven not only by higher home heating demand but also by a roughly 0.7 Bcf/d increase in LNG feedgas deliveries.

LNG feedgas demand has been hitting new highs in recent weeks on increased deliveries to the Cameron LNG and Corpus Christi LNG export terminals on the US Gulf Coast.
Source: Platts

2019-12-14
hellenicshippingnews..
Previous: CCG visit to the HE the President of the Hellenic republic
Next: UK GAS-Prompt prices fall as temperatures turn warmer