OPEC have moved to take supply out of the market but the key question at the start of 2019 is – have they done enough? Expectations for oil demand growth are weak as economic growth slows in China and the US. Meanwhile, US production growth continues and is near breaking through the 12 mmbbl/d of crude oil mark, compared to just 5 mmbbl/d in 2008, and long lead-time developments in deepwater continue to come online. The dynamics on the supply and demand side point to some uncertainty for 2019, and potentially downside risk to oil price in the near-term. In the longer term, however, the issues of low project sanctioning and reserve-replacement will have to be addressed at some point to avoid a supply crunch.

• The Middle East and North America will continue to produce liquids at record levels, leading to 99.4 mmbbl/d of supply in 2025, 8% higher than 2018.
• Driven by US onshore, global drilling activity will experience considerable growth, with over 378,000 onshore development wells to be drilled globally over the forecast period.
• Crude oil production in the US is now close to surpassing 12 mmbbl/d compared to just 5 mmbbl/d in 2008.
• Total US liquids (including NGLs and condensates) production averaged 14.4 mmbbl/d in 2018 and will continue to increase, averaging 15.5 mmbbl/d through 2019.
• Deepwater activity remains a bright spot over the forecast, with production being 49% higher in 2025 than 2018. More than 1,200 wells will be drilled to achieve this.
• Brazil will continue to dominate deepwater production, accounting for 41% of global deepwater oil production over 2019-2025.
• OPEC and OPEC+ announced a 1.2 mmbbl/d production cut from October 2018 reference levels, though Westwood estimates they will fall short of this total by over 200 kbbl/d. 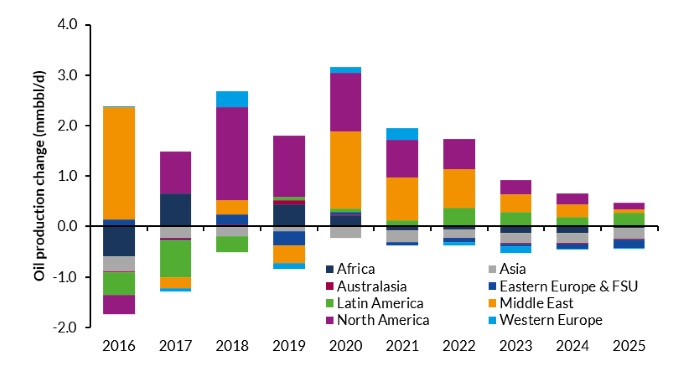 The key story of the last quarter has been on the demand side, with several forecasters lowering their demand expectations due to a slowdown in the global economy. While OPEC’s decision to continue it’s production cut may help offset the production gains made by the US, the weaker demand outlook, high levels of oil stocks and large additions from countries outside of OPEC mean that oil prices are expected to be turbulent.

On the supply side, US liquids production (including NGLs and condensates) has continued at record levels, with 2018 production averaging 14.4 mmbbl/d – 1.5 mmbbl/d higher than 2017. In 2019, some 1.1 mmbbl/d is expected to be added, boosted by continued high levels of drilling and completion onshore. Looking further ahead, growth in the US is unlikely to slow in the near term, as new pipelines come online in Texas, reducing bottlenecks and allowing for an acceleration in completions in the Permian basin.

In response to the extent of US onshore production growth and the sharp decline in oil prices during Q4 2018, OPEC announced a time extension to it’s production cuts (which were previously set to end in December 2018). Excluding those with exemptions, OPEC member states are aiming to reduce production by a combined 800 kbbl/d compared to October 2018 levels. In addition, OPEC+ would cut a further 400 kbbl/d. Based on compliance levels in 2018, Westwood expects OPEC and OPEC+ countries to cut output by only 949 kbbl/d.

In contrast to the production growth in the USA, there are several key producing countries facing major production challenges. Venezuela remains in disarray and is expected to continue to see production decline with crude output of 1.1 mmbbl/d in December 2018, compared to 2.6 mmbbl/d in January 2016. Mexico has seen large declines in recent years and the election of a government that has stopped foreign oil auctions for the next three years is a sign that things may not improve quickly. Furthermore, regional conflict continues to weigh on production, with ongoing disruption in countries such as Syria and Yemen wiping out substantial supply. Similarly, Libya continues to suffer from outages and a lack of stability.

With respect to Iran – waivers given last November to eight countries to continue importing Iranian crude for six months are unlikely to be renewed when they expire. Iranian production has already dropped substantially, with Q4 2018 production averaging 0.7 mmbbl/d lower than Q1 2018. A tightening of US sanctions presents a real downside risk for the country in 2019.

While in the short-term, oversupply is the market’s key issue, the longer-term picture tells a different story. Based on a consensus of continued demand growth in the latter years of the forecast, long-term production additions look set to be insufficient to meet rising demand, leading to a potential undersupply for much of the early 2020’s (based on currently visible projects and reserves). However, this outlook assumes the continuation of outages and economic/political issues for a number of oil producing nations. Any resolution to these issues, as well as any game-changing technological innovation, not to mention any substantial rally in oil prices, will cause the market to come back into balance. However, when and if this will come to fruition remains to be seen.

This report includes data and analysis for more than 70 of the most important energy producing countries (covering >99% of global hydrocarbon supply), including detailed drilling and production forecasts for each country covering the period 2019-2025.