In addition to maximizing diesel production and running lighter, sweeter crudes, US refiners are looking to blendstocks and feedstocks as they create and market their own low-sulfur marine fuel ahead of 2020.

This switch from 3.5% sulfur to 0.5% sulfur in bunker fuel at the start of the new year, as mandated by the International Maritime Organization, has created consternation for some refiners and opportunity for others, particularly those with high-complexity coking plants along the US Gulf Coast.

As refiners look to blend and brand their own marine fuel for shippers ahead of IMO 2020, they are looking to all parts of the barrel, including blendstocks and feedstocks, giving refiners with cokers yet another advantage over less-sophisticated plants.

One fuel they are looking at is HSFO, today’s bunker fuel. HSFO, or residual fuel, production has been declining in the US, but it remains a byproduct of less-sophisticated refineries. During the four weeks ended October 25, production averaged 344,000 b/d, according to US Energy Information Administration data, with some going to the export market. EIA data showed 4.4 million barrels were exported in July 2019.

Valero’s head of supply, Gary Simmons, said on a third-quarter results call the company has a lot of flexibility to run HSFO as a feedstock, particularly at its US Gulf Coast refineries, in lieu of heavier sour crudes. 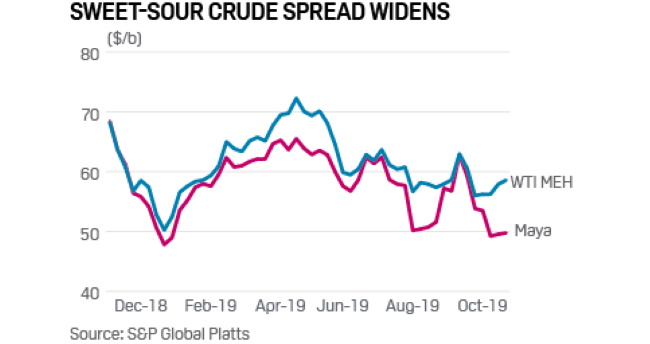 In the third quarter, Valero Energy ran slightly higher volumes of blendstocks and residual fuel through its system, while cutting back on heavy sour and medium sour crudes. Valero’s total system third quarter residual and blendstock throughput was 238,000 b/d and 298,000 b/d, respectively.

“What we run is … the blend stocks that go in the 3.5 weight percent, and so as you see that as people unwind that as a fuel oil, you’re going to see more of these components around the world become available,” he noted. “And the key is going out there and understanding them technically and fitting into our system, which we’re working very aggressively to do that.

He added, “One of the critical strategies going into this towards going in the IMO is to make sure you keep connectivity between these feedstocks and the heavy crude, and we’ve worked really hard at doing that. There are technical challenges. They are around desalting and some of the other things, but we are very focused on increasing on heavy sour resid that we run.”

Valero is offering a “compliant blend” of low-sulfur bunker fuel into the Corpus Christi market and is also going ahead with a project which will give it a low-sulfur blend out of its Pembroke refinery in the UK.

“But we also have seen that there’s a lot of challenges on being able to blend this 0.5 material, especially with a lot of the low-sulfur paraffinic crudes,” Simmons said. “So, I think there is a good chance that initially, ships will run marine gas oil and then gradually transition to the lower-sulfur bunker material.”

DISCOUNTED HSFO WILL WIDEN CRUDE DISCOUNTS
Phillips 66 is also seeing discounting of HSFO and other high-sulfur intermediates as an opportunity to increase utilization at some of its refineries.

“They’re relatively small volumes, 1,000 to 5,000 b/d here and there, dependent on the refinery across our portfolio,” said Jeff Dietert, Phillips 66’s head of investor relations.

“As you know, we do have substantial coking capacity to upgrade these streams and expect to benefit from these discounts,” he added, speaking on a third-quarter results call.

Dietert said logistics is the factor limiting volumes of HSFO that can be brought in to refineries because they pull on infrastructure, pipeline and storage capacity.

However, Phillips 66 expects higher utilization of HSFO feed will flow “through to wider discounts on crudes, and we’re starting to see that in a marketplace with a little bit of a lag,” Dietert said.
Source: Platts

2019-11-01
hellenicshippingnews.
Previous: How the Trade War and a Changing China Are Roiling World Shipping
Next: MABUX: Bunker Market this morning Nov. 01