The blame game over the recent OPEC+ decision to cut crude oil production has escalated, with the US again accusing Saudi Arabia of siding with Russia, after the kingdom rejected any suggestion that politics played a role in its shepherding of the deal.

In a sharply worded statement Oct. 13, White House spokesman John Kirby said Saudi officials were keenly aware that cutting production to prop up prices would increase Russia’s ability to finance its war in Ukraine and blunt the effectiveness of western sanctions on Moscow.

“As [President Joe Biden] has said, we are reevaluating our relationship with Saudi Arabia in light of these actions and will continue to look for signs about where they stand in combating Russian aggression,” Kirby said.

The comments came hours after Saudi Arabia’s foreign ministry said the OPEC+ decision was “purely economic” and aimed at balancing supply and demand.

“The kingdom stresses that while it strives to preserve the strength of its relations with all friendly countries, it affirms its rejection of any dictates, actions or efforts to distort its noble objectives to protect the global economy from oil market volatility,” it said in a statement.

Saudi Arabia has been taking fire from the US since the OPEC+ alliance, which the kingdom co-chairs with Russia, agreed Oct. 5 to slash quotas by 2 million b/d from November, at a time when many forecasters are expecting oil demand to rise.

Biden has vowed to impose “consequences” for the decision, with a so-called NOPEC bill that would allow antitrust lawsuits against the producer group among the options being weighed by Congress.

Some leading Democrats went as far as to call for a halt to new arms sales to Saudi Arabia in a move that would be a significant security blow to the kingdom as it deals with ongoing threats from regional actors.Various lawmakers have called on the Biden administration to remove barriers to further domestic oil and gas production in response to the dispute. Republicans especially noted that many of their Democratic colleagues were outraged by OPEC+’s decision to curb production yet had supported efforts to restrict US producers. 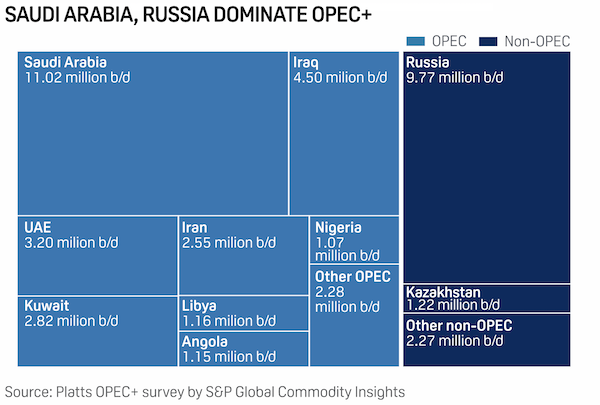 The administration could deliver by year-end the remaining 15 million barrels from the original 180-million-barrel emergency release and 26 million barrels of FY 2023 congressionally required sales.

On the more disruptive side, Sheldon noted that restrictions on US refined product exports have again been floated as a policy option. While the Biden administration’s “relatively pragmatic policies to date” suggest it’s unlikely to take that route, “elevated fuel prices ahead of elections dramatically increase political consideration of policy measures to alleviate pressure at the pump,” he said.

The International Energy Agency, which represents consuming nations and has strong US backing, piled on, saying the cuts would worsen the global energy crisis and limit a much-needed build in oil stocks through the first half of 2023. The IEA estimates that world oil demand will rise from 99.96 million b/d in the third quarter of 2022 to 100.58 million b/d in the fourth quarter.

“The OPEC+ bloc’s plan to sharply curtail oil supplies to the market has derailed the growth trajectory of oil supply through the remainder of this year and next, with the resulting higher price levels exacerbating market volatility and heightening energy security concerns,” the IEA said in its closely watched monthly oil market report Oct. 13.

OPEC+ ministers have defended the deal, reached at their first in-person meeting in Vienna since March 2020, saying there are many warning signs of a recession in the months ahead and noting that oil prices have not spiked in 2022 nearly to the extent that other commodities, including natural gas and coal, have.

The Saudi foreign ministry said the cuts were unanimously agreed to by all 23 members of the alliance and not intended to benefit Russia in its war against Ukraine. Kirby, in his statement, said some OPEC members had privately told the US they felt pressured into agreeing with the deal.

Given that many members, including Russia, are vastly underproducing their quotas already, the actual amount of oil being removed from the market will be much smaller — roughly 780,000 b/d, according to S&P Global calculations, most of it borne by Saudi Arabia and the UAE.

Saudi Arabia, for example, pumped 11.02 million b/d in September, according to the latest Platts survey of OPEC+ production by S&P Global, and would be required to hold its output to 10.478 million b/d from November.

Any cuts would come as the US’ 1 million b/d releases from its SPR are scheduled to end in October, potentially exacerbating a tight market, while an EU ban on seaborne imports of Russian crude is scheduled to go into effect Dec. 5.

OPEC+ ministers, who are next scheduled to meet Dec. 4, said they can alter the cuts, if economic conditions require, though this would take another unanimous agreement.

Crude futures, which had retraced the gains made in the wake of the OPEC+ decision, have since rallied. ICE front-month Brent futures settled up $2.12 at $94.57/b Oct. 13.

According to Helima Croft, managing director and global head of commodity strategy at RBC Capital Markets, leading oil market analysts had been reading the tea leaves and anticipating cuts since the September OPEC meeting.

But “Washington was blindsided by this,” and the optics of holding a meeting with recently US-sanctioned Russian Deputy Prime Minister Alexander Novak “reignited anger about Russia continuing to play the co-managerial role of OPEC+” and added to the fallout, she said.

But European leaders have not joined in the harsh rhetoric against Riyadh as they likely realize “there will be an additional call on Middle Eastern barrels” come Dec. 5, Croft said, explaining that “only a handful of producers” are capable of backfilling the loss of Russian barrels to Europe if European countries want to avoid being short on oil in addition to dealing with a natural gas crisis.

Additional supplies from Saudi Arabia, the UAE, Iraq and others have already flowed to Europe, “but to ask these countries to temporarily cede market share in their most important Asian markets is a significant ask that Europe is going to have to make,” she said. “We simply don’t know what the market dislocation will be once you have the other sanctions kicking in.”

Ben Cahill, senior fellow for the Center for Strategic and International Studies’ energy security and climate change program, questioned US policymakers’ kneejerk reaction to frame the production cut as a turning point for the entire US-Saudi relationship.

NOPEC, product export bans and other moves pitched could “create a lot of unintended consequences and real risks, and it’s not something that should be done rashly or out of anger,” he said. “I would say de-escalate. Don’t assume that every monthly production decision by OPEC+ is an existential issue.”

Brenda Shaffer, senior advisor for energy at the Foundation for Defense of Democracies think tank, offered that the US would derive little benefit from ratcheting up conflict with Saudi Arabia, especially in the midst of the worst energy crisis since World War II and widening global recession.

She singled the US out as the only major oil producer that did not return to pre-Covid production rates. “The US is the chief culprit for the current state of the global market and subsequent price,” she added. “It is hard to fathom why the administration spends energy chastising Saudi Arabia and courting Venezuela and Iran in search of additional oil supplies, while it doesn’t appeal to Houston.”

ESAI Energy managing principal Sarah Emerson contended that “the important OPEC+ decisions are ahead of us, starting in December when the EU ban goes into effect.”

“The Biden administration has a lot on its energy plate already with the price cap implementation and what to do if Russia retaliates,” she said in an email Oct. 13. “It seems bad timing to focus on ‘punishing’ Saudi Arabia. I am not sure what could be accomplished vis-à-vis Saudi Arabia in the lead up to the impending supply problem.”

But David Goldwyn, president of Goldwyn Global Strategies and chairman of the Atlantic Council Global Energy Center’s Energy Advisory Group, asserted that “the Saudi-led OPEC+ production cut, timed to interfere with our elections and undermine the price cap on Russian exports, demands a response.”

He expects the administration to delay its next steps to see the price impact of the cut and determine how the price cap on Russian seaborne exports affects global supply.

“Saudi Arabia will have an opportunity to play a constructive role if the price cap leads to a significant displacement of Russian crude oil exports,” he said. “If they miss that opportunity, I expect there will be security and legislative repercussions in the new year.”
Source: Platts

2022-10-17
hellenicshippingnews...
Previous: Why the oil trade may have more juice despite a losing week
Next: OAPEC Sec Gen says OPEC+ decision to cut oil production ‘correct’