US Soya Bean Season Kicks Off With Strongest Exports In History

Following years of disruption to US soya bean exports due to the US-China trade war, the first seven weeks of the 2020/2021 marketing year, which runs from 1 September to 31 August, have seen the strongest exports ever.

“The very strong start to the US soya bean season beats all previous records and marks a return to business between the US and China’s soya bean importers, following years of disruption as China imposed tariffs on US soya beans in July 2018 due to the trade war,” says Peter Sand, BIMCO’s Chief Shipping Analyst.

“In a year when much is unprecedented, a return to normal and strong volumes on this trade – and on Chinese soya bean imports in general -, removes some of the uncertainty facing dry bulk owners due to the trade war and the COVID-19 pandemic,” Sand says. 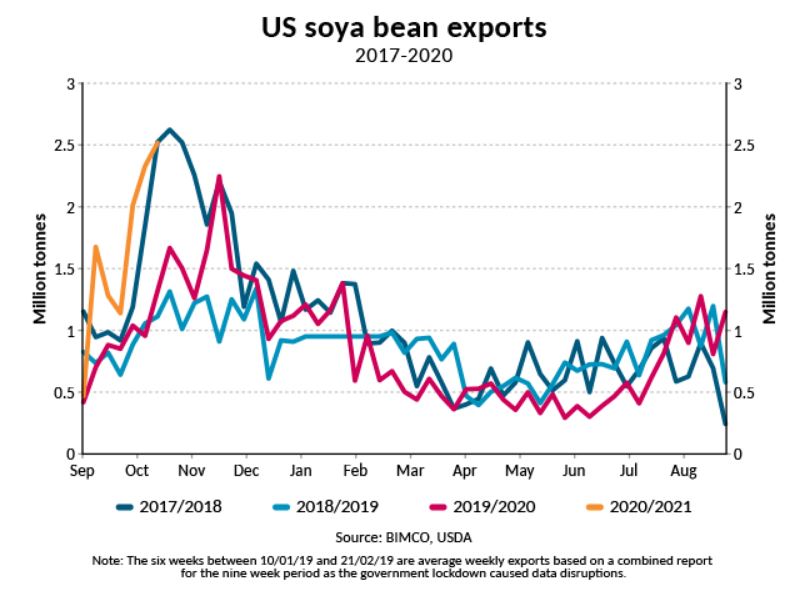 China back in the US market

The return of Chinese buyers to the US market is the primary reason behind the strong start to the season. In the week ending 15 October, the US exported 2.5 million tonnes of soya beans. Of this, 77.9% (or just under 2 million tonnes) went to China. Accumulated over the first seven weeks, exports to China amounted to 8.2 million tonnes, 71.9% of total US soya bean exports.

The Phase One Agreement between the US and China includes a commitment from the Chinese side to boost their imports of agricultural products from the USD 18.6 billion import level in2019. The chances of this target being met are next to none, with exports from the US reaching only 28.8% of the target in the first eight months of the year. However, soya beans are an important commodity in the deal and any boost to volumes falling under the agricultural products category of the Phase One Agreement in the last months of the year, will provide much needed demand for dry bulk shipping, even though it will not be enough to fulfil the agreement. 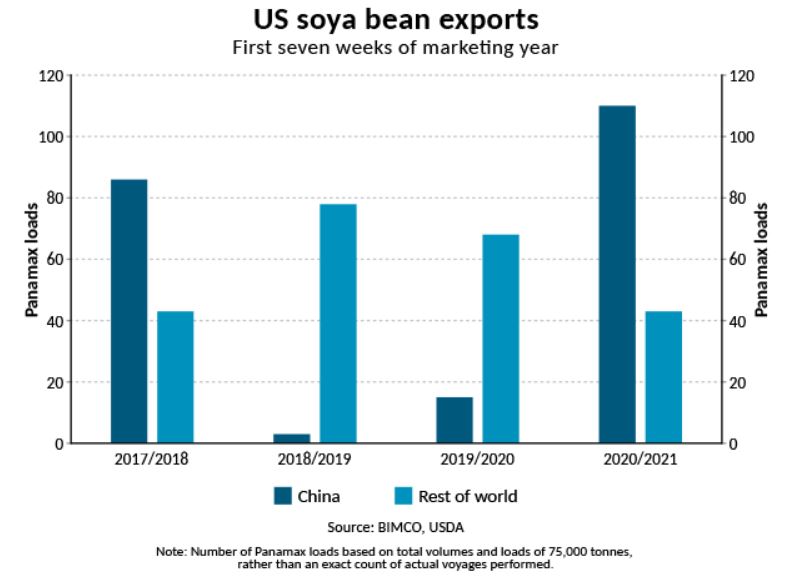 “Compared to before the trade war, exports to China have risen by almost 30%, whereas exports to the rest of the world has been steady. In tonne mile terms, this brings a large boost to the shipping industry as the extra tonnes to China lead to a more than proportional increase in tonne mile demand,” says Sand.

After a slow start to the year in January and February, Chinese soya bean imports have performed strongly overall, with imports from Brazil also on the rise. Soya bean exports from Brazil to China have risen by 25.9% this year compared to the first three quarters of 2019.

Brazil has exported 57.8 million tonnes of soya beans to China so far this year, accounting for 72.8% of total Brazilian soya bean exports. Despite the strong growth in volume terms, this is the lowest share since the trade war started, falling short of its 82.3% peak in 2018.Total Brazilian soya bean exports to all destinations have risen by 30.5% to 79.3 million tonnes so far this year.

Overall, total Chinese imports of soya beans have risen by 15.5% in the first nine months of this year, compared to the same period last year, amounting to 74.5 million tonnes, which is an increase of 10 million tonnes (134 Panamax loads).

“As with other dry bulk commodities, China has become even more important in this pandemic year, as demand from China has grown compared to a fall in demand from the rest of the world. This is all the more puzzling for soya beans, which face lower demand in China as the pig herd remains smaller than it was before the large scale culling of millions of pigs to avoid the spread of the African Swine Flu. Though the pig herd is now growing, it remains considerably below the level seen several years ago, supressing demand for soya beans,” Sand says, adding:

“However, the strong imports now look set to continue throughout the rest of the year, given the strong start to the US export season, as well as the elevated outstanding sales which currently stand at 16.7 million tonnes, compared to just 4.6 million this time last year.”
Source: BIMCO, Peter Sand, Chief Shipping Analyst