US steel imports seen rising in 2022

Steel imports in the US are expected to rise enough in 2022 to keep pressure on domestic prices that reached record levels in 2021, but these shipments will not necessarily represent an import surge, according to industry analysts.

John Anton, director of pricing and purchasing at IHS Markit, said the steel import numbers next year may appear as a spike, but this is mainly because imports since 2018 have been abnormally low due to tariffs, the coronavirus pandemic and logistics issues.

“I would see imports maybe getting back to 2015-2017 levels but do not see them surging,” Anton said in a recent interview with S&P Global Platts. 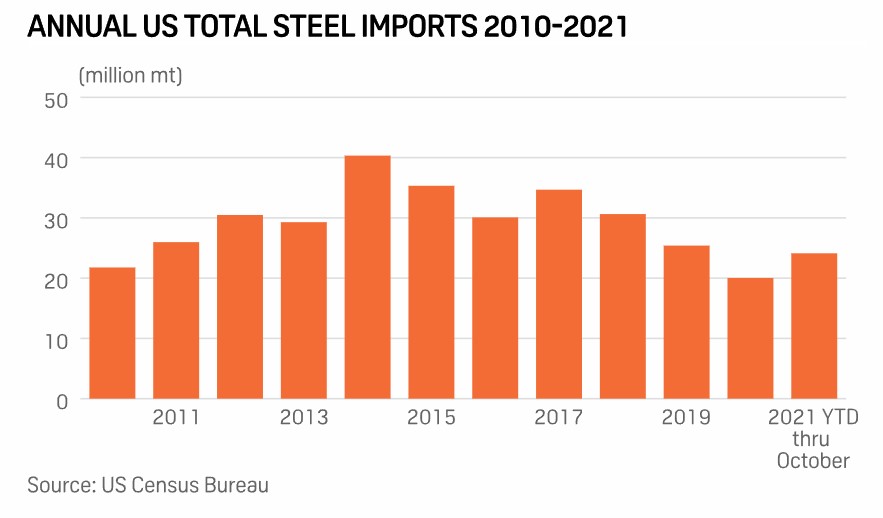 Imports of certain steel products such as hot-rolled coil already increased in the later months of 2021 because high US prices have made lower-priced imports more attractive despite tariffs, Anton added.

UBS analyst Andreas Bokkenheuser said the availability of imports in 2022, along with new North American steel capacity coming on line, will ease supply tightness and may weigh on high domestic prices, a trend that started at the end of 2021.

“A lot of buyers are opting for imports,” he told Platts. “That, in combination with high inventories and lead times having fallen, is going to probably push domestic prices down even further.”

More subdued price levels will trend in 2022 as US producers respond to higher imports, according to Phil Gibbs, an equity research analyst at KeyBanc Capital Markets. 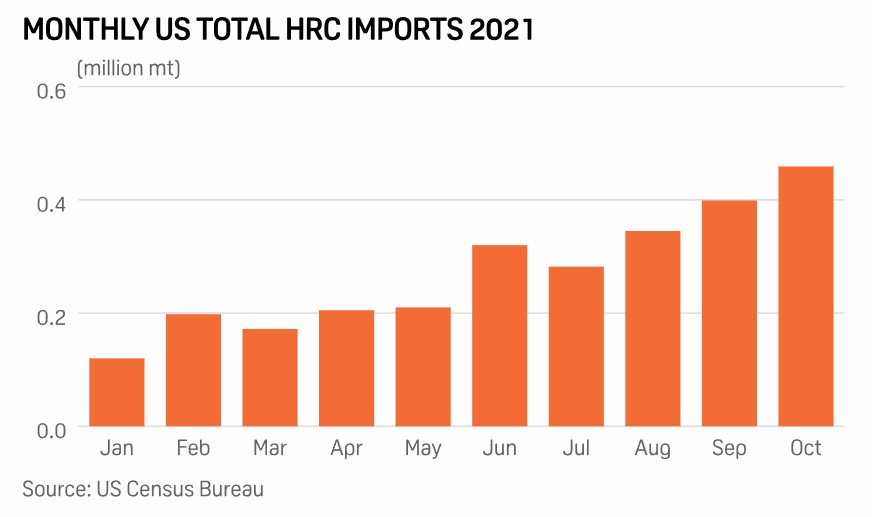 “For domestic mills to get their order books back, they are going to have to incentivize buyers to come to them and stop them from placing marginal import orders,” Gibbs said in a recent interview with Platts. “That’s going to put pressure on pricing.”

Amid the recent uptick in imports, US steel industry groups said the proper application of trade mechanisms in 2022 will be critical to protect domestic producers.

“We’re seeing a lot of steel coming in, and part of that is because we have a strong economy and strong demand,” American Iron and Steel Institute CEO Kevin Dempsey told Platts.

“But we do want to make sure our trade laws, both 232 (tariffs) and the antidumping and countervailing duty laws, are fully and effectively enforced because a new surge in imports, dumped and subsidized imports, could really set back the progress the industry has been making.”

Steel Manufacturers Association President Philip Bell said the finished steel import market share in the US reached 25% through the end of October, a statistic that “we should be concerned about.”

“What we have seen is a steady increase in imports since the beginning of [2021],” Bell told Platts. “We know that we will need fairly and legally traded imports to meet some of the demand in our country, but 25% is starting to approach historic highs.”

According to the latest AISI analysis, the finished steel import market share was an estimated 27% in November and is estimated at 22% over the first eleven months of 2021.

Anton said imports will continue to play a significant role in the US market as long as domestic prices remain elevated above global pricing. However, the price differences between US-produced steel and foreign steel represent a sort of “paradox,” he added.

“The US costs are lower per ton than Europe where they have older mills and even stricter labor laws, probably a looming carbon border tax and there are more natural resources [in the US],” he added. “There’s no reason steel should be more expensive in the US than Europe.”

The Biden administration began modifying the US Section 232 metal tariffs in October upon striking a deal with the EU that would allow a certain volume of shipments to enter the US duty-free under a quota, and similar arrangements with other foreign governments may follow in 2022.

“[The tariff-rate quota with the EU] gives us some protection against a new surge in imports and ensuring full and effective enforcement of that is going to be really important,” Dempsey said.

The Section 232 tariffs were imposed on most countries in 2018 under former President Donald Trump.

Bokkenheuser said the US industry is now “in a bit of a holding pattern” as other countries lobby the US to modify steel tariffs on their own exporters, but changes to the duties will ultimately help US downstream manufacturers.

“Bringing cheaper steel into the country should help to alleviate manufacturers,” he said. “Manufacturers will be more competitive being able to buy price-competitive steel in the US, whether it’s from domestic supply or imports.”
Source: Platts