Natural gas volumes in US underground storage facilities increased in line with the five-year average while the Henry Hub prompt month contract continues to push above prices not seen since early January as the final three months of injection season commence.

US underground natural gas storage inventories increased by 33 Bcf to 3.274 Tcf in the week that ended July 31, according to US Energy Information Administration data released Aug. 6.

The injection was larger than the consensus expectations of analysts surveyed by S&P Global Platts, which called for a 27 Bcf build. Responses to the survey ranged from an injection of 20 Bcf to one of 33 Bcf. The injection measured less than the 58 Bcf build reported during the same week last year, but matched the five-year average build of 33 Bcf, according to EIA data. 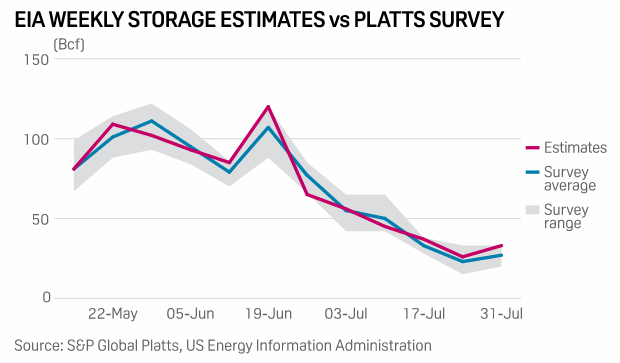 The NYMEX Henry Hub September contract added 3 cents to $2.22/MMBtu in trading following the release of the weekly storage report at 10:30 am ET.

NYMEX Henry Hub prices over the last week have staged an impressive rally as the balance-of-summer strip, now comprising just September and October, has increased by more than 25 cents on diminishing expectations that storage will breach the 4 Tcf mark by the end of season. The winter strip, likewise, has moved higher as well, settling at $2.95 in at Aug. 5 close and gaining another 2 cents in the session Aug. 6.

LNG feedgas has broken above 4 Bcf/d in August, according to S&P Global Platts Analytics. It marks the first time LNG feedgas demand climbed above 4 Bcf/d since June 30, an increase of over 800 MMcf/d from the prior week’s average. Although total US liquefaction utilization remains under 40%, there are expectations for stronger feedgas demand in September and October, when US Gulf Coast netbacks are in positive territory.

US production has averaged 87 Bcf/d to start August, 300 MMcf/d lower than July. Roughly half of the production losses are maintenance driven, and expected to return by Aug. 7, but the overall risks to the remainder of the summer skew bullish due to strong power burn demand and the recovery in LNG feedgas demand.

Despite lower week-over-week production and higher LNG demand, models point to a larger injection for the week in progress. For example, Platts Analytics’ supply and demand model currently forecasts a 52 Bcf injection for the week ending Aug. 7. This would increase the surplus to the five-year average by 8 Bcf.

Recent changes to supply and demand fundamentals have lowered Platts Analytics’ forecast for end-of-season inventories from 4 Tcf down to 3.858 Tcf, which would only register about 50 Bcf more than the five-year average before withdrawal season begins in early November. 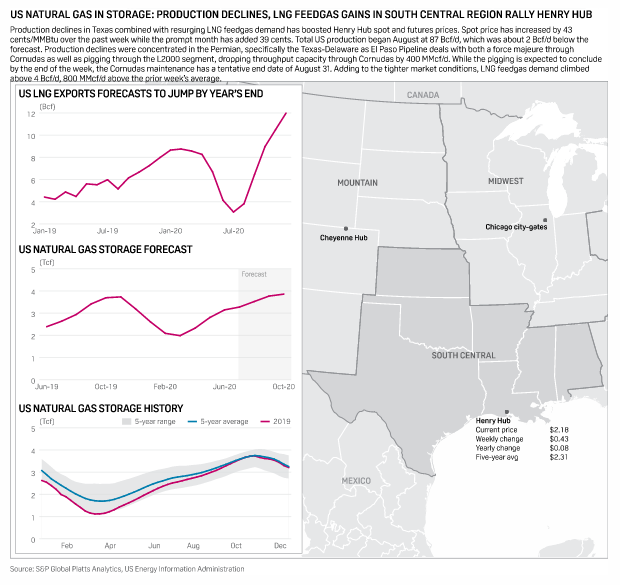