The warnings were there
Over recent weeks the warnings from Tokyo had been building. Descriptions of one-sided moves and moves out of line with fundamentals morphed into more explicit threats to intervene. Today those threats materialised in intervention, with the Bank of Japan selling USD/JPY to the market from around the 145.70 level.

The Ministry of Finance’s website suggests it now reports intervention on a bi-monthly basis. The next release of data is on 30 September. Comparisons with markets 20-plus years ago come with the appropriate health warning. For what it’s worth, when Japanese authorities started intervening to sell USD/JPY in December 1997, they made a splash by buying around JPY1trn over a consecutive three-day period – i.e. they sold close to US$8bn.

Objectives and outlook
Presumably, Tokyo wanted to break the cycle of an ever-higher USD/JPY, even though Japan’s policy of effectively draining liquidity with JPY buying operations is at odds with the BoJ’s ongoing JPY-liquidity add through its various quantitative easing programmes. Japanese officials will be well aware of this contradiction and probably hope to slow or stabilise USD/JPY – rather than actively seek a reversal of the very powerful dollar bull trend. 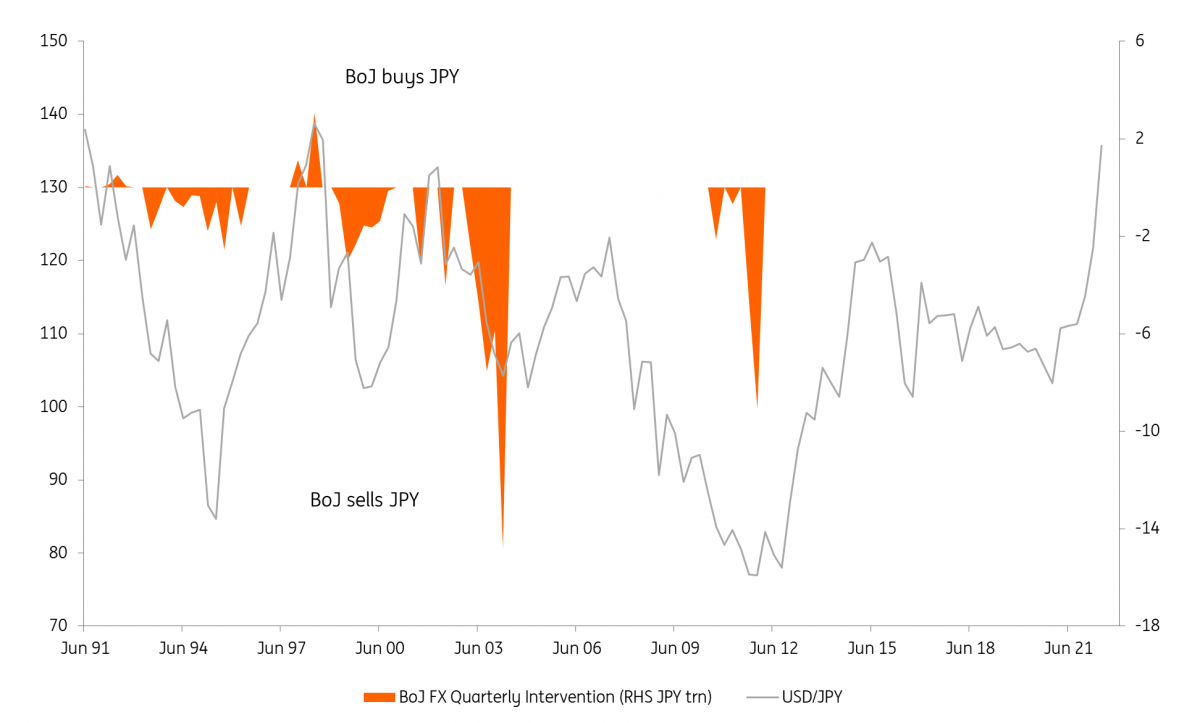 We are also a little surprised that Tokyo went with the intervention. Either authorities had Washington’s blessing or they wanted to flex their domestic policy muscles against the overriding G20 mandate of flexible exchange rates. The issue now will be whether G20 central bankers and finance ministers agree that FX markets have become disorderly when they issue their next Communique on 12 October.

Clearly, investors are going to think twice about paying for USD/JPY over 145 now. And one can argue that we will now enter a volatile 140-145 trading range. But expect investors to be happy to buy dollars on dips near 140/141 knowing that Tokyo will find it impossible to turn this strong dollar tide – a tide that should keep the dollar supported through the remainder of this year.

BoJ sells USD/JPY for the first time since the late 90s
Source: ING