Air bubbles, produced artificially under the ship’s hull, will help Vale further reduce its greenhouse gas (GHG) emissions from navigation. The technology, known as air lubrication, was installed in the Sea Victoria, a Guaibamax with a capacity of 325 thousand tons. Ten compressors installed on the ship’s deck send air to twenty devices positioned under the ship to produce a carpet of bubbles. These bubbles reduce the friction between the hull and the water, reducing fuel consumption and, consequently, emissions. Sea Victoria, which is already on its way to Brazil, is the first ore carrier in the world to use this technology. 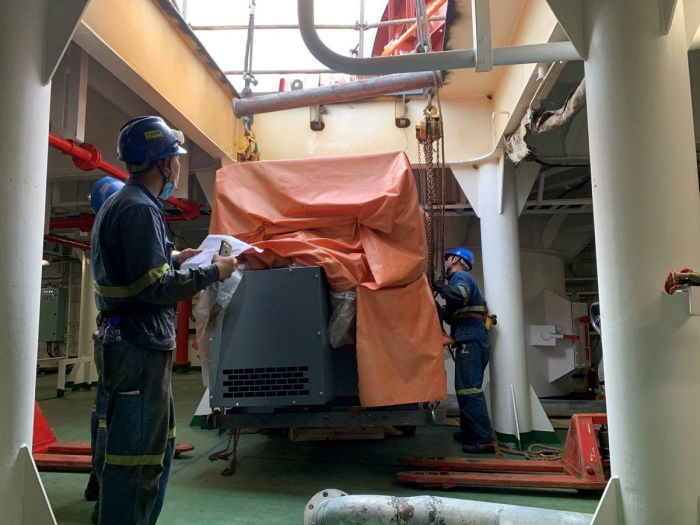 Vale’s navigation team estimates that, if the test is successful, the technology could be replicated on the remainder of the contracted fleet dedicated to transporting the company’s ore. “Conservative estimates point to a fuel reduction of around 5 to 8%, with a potential reduction of 4.4% in annual emissions from Vale´s maritime transport of iron ore”, explains the technical manager of Navigation, Rodrigo Bermelho.

The technology is supplied by the English manufacturer Silverstream. Vale developed the project in partnerships with ITV (Vale Institute of Technology) and the Korean shipowner Pan Ocean to install the technology on one of the VLOCs (Very Large Ore Carrier) dedicated to transport Vale ores. Shanghai Ship Design Research Institute (SDARI) was responsible for the ship design and its integration with the bubbles. The Chinese shipyard, New Times Shipbuilding, prepared the vessel during its construction and the shipyard, Yiu Lian Dockyards (Shekou) LTD, located in the Chinese city of Shenzhen, installed the equipment. The installation took 35 days and the ship was ready on the June 28th 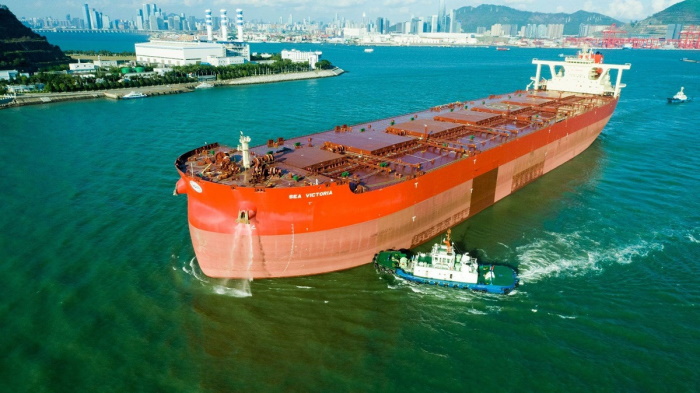 The adoption of air lubrication is part of Vale´s Ecoshipping program, a program created to meet the challenge of reducing the company’s carbon emissions, in line with what has been discussed within the scope of the International Maritime Organization (IMO). Last year, the company announced that it intends to neutralize its direct and indirect emissions (scopes 1 and 2) in 2050 and still reduce scope 3 emissions by 15% by 2035. Scope 3 emissions are emissions from the company’s value chain, which includes emissions from shipping since the company contracts the ships from third parties to transport their ore. Vale’s emission reduction goals are in line with the ambition of the Paris Agreement.

The technology, known as air lubrication, was installed in the Sea Victoria, a Guaibamax with a capacity of 325 thousand tons.

Recently, Vale announced the launch of the world’s first ore carrier equipped with rotor sails, also built in China and scheduled to arrive in Brazil at the end of the month. Like air lubrication, the new technology were installed on a Guaibamax. There are five sails distributed along the vessel that allow an efficiency gain of up to 8% and a consequent reduction of up to 3.4 thousand tons of CO2 equivalent per ship per year. If the pilot project proves to be efficient, it is estimated that at least 40% of the fleet will be able to use the technology, which would result in a reduction of almost 1.5% in annual emissions from Vale’s maritime transport of iron ore.

The rotor sails are cylindrical rotors, four meters in diameter and 24 meters high – equivalent to the height of a seven-story building. When in operation, the rotors rotate at different speeds, depending on the ship’s environmental and operating conditions, to create a pressure difference which propels the ship forward, a phenomenon known as the Magnus effect. 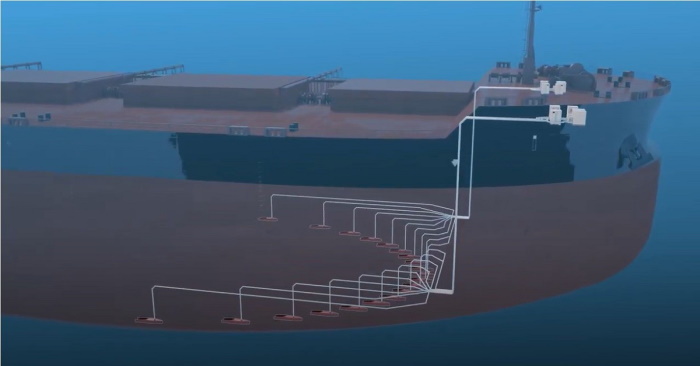 Earlier this month, Vale also signed a memorandum of understanding (MOU) with another 23 companies to start a study on the use of ammonia as an alternative marine fuel. In addition, the company has been preparing for the adoption of alternative fuels. Dozens of second-generation VLOCs already in operation, have been designed for the future installation of a liquefied natural gas (LNG) system, including an under-deck compartment to accommodate a full-trip tank. The Ecoshipping program is developing a multi-fuel tank that in the future will be capable of storing and consuming not only liquefied natural gas (LNG) but also methanol and ammonia.

According to Bermelho, the adoption of energy-efficient technologies such as rotating sails and air lubrication will reduce the fuel consumption per ship and facilitate the adoption of low-carbon fuels. A preliminary study of Guaibamax ships estimates that emission reductions can range from 40 to 80% when powered by methanol and ammonia, or up to 23% in the case of LNG.

With the adoption of new technologies and the renewal of Vale´s fleet, the company has invested heavily to incorporate state of the art solutions for navigation in terms of efficiency and environmental innovation. Since 2018, the company has been operating the second-generation Valemaxes and, since 2019, with Guaibamaxes, with capacities of 400 thousand tons and 325 thousand tons, respectively. These vessels are among the most efficient in the world and are able to reduce CO2 equivalent emissions by up to 41% compared to a capesize vessel which was built in 2011 and weighs 180 thousand tons.

“Vale has made a large step forward in their Ecoshipping program, an initiative designed to reduce the company’s carbon emissions, by taking delivery of their first Very Large Ore Carrier (VLOC) with an air lubrication system installed on the hull.

“This system creates artificial air bubbles under the hull which reduces friction between the hull and the water, thus reducing both fuel consumption and emissions. If the test is successful on the SEA VICTORIA the technology could be fitted to the remainder of Vale’s contracted fleet. The technical manager of navigation at Vale estimates a conservative reduction in fuel usage of around 5-8% with the potential to reduce annual emissions from Vale’s sea transport of iron ore by around 4.4%.

The air lubrication system is not the only new technology that Vale is trialing to reduce their emissions. It recently announced the launch of the world’s first VLOC to be equipped with rotor sails, due to arrive in Brazil at the end of July. The five sails will allow an efficiency gain of up to 8% and a reduction of up to 3,400 tons of CO2 per ship per year. Again, if this pilot is successful Vale will be looking at fitting the system onto other vessels in the fleet.

“What’s more, dozens of VLOCs already in operation have been designed for future installation of LNG systems for propulsion. Vale are also working on developing a multi-fuel tank that will enable storing and consuming of both methanol & ammonia as well as LNG.

“These investments in state of the art technology show that efficiency and environmental innovation goes beyond simply considering the different types of fuel available. Spending on systems that can be effectively retrofitted is going to be a key way for shipping to reduce it’s emissions of older vessels that may not be compatible with newer fuels such as green hydrogen. All new vessels will need to be built with systems that can be used to keep emissions low, or with space already assigned for systems to be retrofitted later, as now demonstrated by Vale, in order to meet the IMO 2050 targets.”
Source: Vale, with Input from Reed Smith