Valenciaport handles more than 3.2 million containers up to July and grows by 10%

3,287,476 containers and more than 49.5 million tonnes of goods have been moved through Valenciaport’s docks in the first seven months of the year. Both figures are above the figures for 2020, specifically, TEUs (standard 20-foot containers) have increased by 10% and freight traffic by 11.1%. But they are also slightly higher than the figures for 2019 (year without pandemic), with growth in 2021 of 1.7% for containers and 2.4% in tonnes compared to 2019.

In this context, a strategic role is being played by the exports of Spanish companies operating in Valenciaport, which mobilised a total of 632,082 containers full of cargo up to 31 July, i.e. 116,880 more than in 2020, representing a growth of 22.7%. This growth is reflected in the dynamism of sectors such as construction materials, the agri-food industry, chemical and steel products and the automotive sector. An example of the role played by the ports of Valencia, Sagunto and Gandia and their connections with all corners of the world, which facilitates the work of exporting companies in their hinterland, a key factor in the recovery of economic activity and job creation. 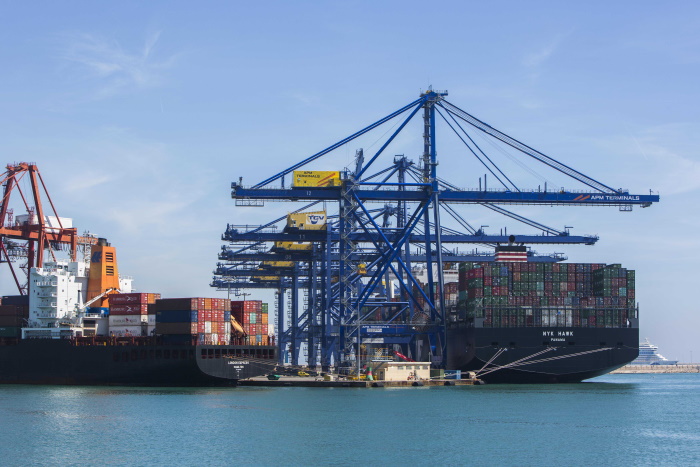 In these first seven months of the year, unloading containers (imports) have also increased by 15.53%, transit by 7.61%, while empty TEUs have registered a growth of 1.95%. In this line, it should also be noted that between January and July of this year, ro-ro traffic was 14.36% higher than in the same period in 2020, and cars under the goods regime reached 307,162 units, an increase of 5.35%.A positive trend that is reaffirmed in the year-on-year data for August 2020-July 2021, – a period that is still marked by the complexity of the economic and pandemic situation – when a total of 5,726,871 TEUs were handled, a number that is close to six million containers per year.

Freight traffic grows in all sectors

In these first seven months of 2021, freight traffic grew compared to 2020 in all sectors analysed. If we look only at goods destined for export, construction materials have mobilised 4,018,062 tonnes, 35.26% more than in 2020. The agri-food industry handled a total of 2,559,365 tonnes, up 28.11%, while vehicles and transport items destined for export generated 2,313,401 tonnes, up 17.51%. It is also worth highlighting the growth in exports of iron and steel products through Valenciaport, which have increased by 37.1%.