The Port Authority of Valencia (PAV) has received an award at the World Sustainability Awards, the “port Oscars” in environmental matters, granted by the International Association of Ports and Harbors (IAPH), for the PASSport project which aims to improve protection in European ports.

The initiative pays particular attention to the surveillance of pollution in the water and by air by means of aerial and underwater drones.

Aurelio Martinez, president of the PAV is grateful for this recognition which “reaffirms that we are in the right line of giving maximum priority to environmental issues”.

He points out that “the ports want to be at the forefront of climate change and the adoption of measures. Care and respect for the environment is in the DNA of the Port of Valencia”.
This is the fourth time that the most important international awards for sustainability have recognised the work of Valenciaport.
The PAV continues to make progress in projects such as the electrical substation, the use of hydrogen in the terminals or the creation of an innovation hub, among other actions, to meet the Valenciaport 2030 objective, zero emissions.

The Port Authority of Valencia (PAV) has been recognised at the World Sustainability Awards 2022 at the gala organised by the International Association of Ports and Harbors (IAPH) in Vancouver. An award that highlights the PAV’s commitment to sustainability and decarbonisation in different areas such as infrastructures, renewable energies, digitalisation and R&D&I. There are already four Valenciaport initiatives that have been recognised by these World Sustainability Awards in recent years.

The president of the PAV, Aurelio Martínez, said of this award that “it is a worldwide recognition granted by the IAPH, the port Oscars, which reaffirms that we are on the right track in giving top priority to environmental issues. Specifically, it has been awarded to the PASSport project which aims to improve the protection of European ports with a high degree of innovation by using aerial and underwater drones to detect any type of pollution and other types of operations. This allows us to have real-time information that complements the network of sensors that we already have in the Port of Valencia”.

For the PAV, a sustainable port is an essential objective, as stated in its zero emissions strategy for 2030. To this end, it is carrying out initiatives such as H2PORTS to establish the use of green hydrogen in its operations, the installation of an electrical substation to connect the ships’ engines to shore power while they are docked at the Port of Valencia, the location of photovoltaic plants or the installation of wind turbines to generate wind energy. It is also committed to digitalisation and new technologies to implement sustainable actions. In recent years, the PAV has developed more than 200 R&D&I projects, many of them focused on sustainability issues, and has promoted initiatives such as Opentop – Valenciaport’s Innovation HUB or SuperLabPorts. These actions have positioned the Port of Valencia as an international benchmark in the fight against climate change in maritime transport.

Drones to monitor pollution
Specifically, at the IAPH gala held in Vancouver, which was attended by Manuel Rodríguez from the PAV’s International department, Valenciaport received an award for a digitalisation project: The European PASSport initiative which aims to respond to the needs of the sector to improve the security of all European ports. The PASSport solution will complement existing operational platforms by extending the surveillance perimeter through a fleet of aerial and underwater drones to provide innovative operational support to the safety and security aspects of daily operations. It will pay particular attention to pollution surveillance at sea and in the air, e-navigation support, protection of buildings and critical infrastructure, defence against non-cooperative small craft approaching port areas and monitoring of underwater threats.

“The use of drones with sensors will allow us to control and monitor emissions and other environmental variables with very useful information for Valenciaport’s strategy in the fight against climate change,” said Rafael Company, director of Security and Safety of the Valenciaport Foundation and coordinator of the project.

On the other hand, the project is expected to activate marketing channels based on the services offered by the use of a fleet of drones and integrate the activity of sensors such as Galileo to ensure the safety and security of port areas. PASSport is supported by 16 European institutions, including the Valenciaport Foundation and the Port of Ravenna, which are participating in this project that has received funding from the European Union Space Programme Agency (EUSPA), within the framework of the European Union’s Horizon 2020 research and innovation programme. 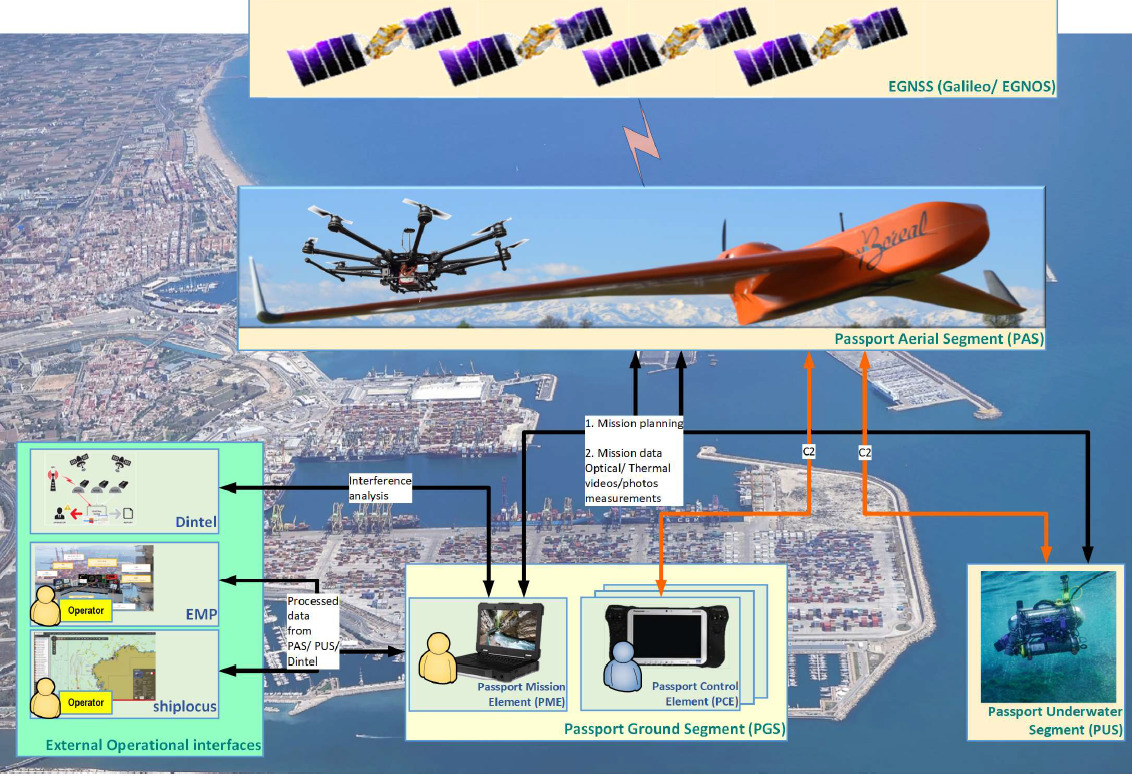 Award winners in 2020
Once again, Valenciaport is recognised worldwide, in this case by the #IAPH 2022 awards, devising new ways to bring the maritime sector closer to new technologies and adapt it to the digital era. In this way, the APV has established itself as a pioneering institution in the field of digitisation.

The IAPH has already awarded Valenciaport in 2020 for the Green C Ports and LOOP-Ports projects in the categories of “Resilient Infrastructure” and “Climate and Energy” respectively. The former allowed reducing the environmental impact of port operations on cities and controlling emissions, while the latter facilitated the transition to a more circular economy in the sector. In 2013, the APV received this award for the Climateport initiative, focused on the contribution of Mediterranean ports in the fight against climate change and the reduction of the carbon footprint.

Sustainability, top priority of the port managers
The head of Valenciaport underlined the commitment being made by the port community in the fight against climate change. An obligation which the ports are leading. He referred to the report of the European Sea Ports Organisation (ESPO) which states that “67% of the managers of European ports consider sustainability to be their top priority at the moment as an element of management”.
“This is important because the ports are an economic benchmark, and the fact that European ports are concerned about such a key variable as pollution indicates that there is a problem of awareness and responsibility. The ports want to be at the forefront of climate change and the adoption of measures”, Aurelio Martínez pointed out.

The president of the PAV went on to point out that “in the Port of Valencia, in addition to the 2030 strategy, we have allied ourselves with the city council, the Generalitat and all the institutions that have programmes along these lines. For example, we are collaborating in the transformation of hydrogen into the energy of the future. This transformation requires time and research, and the institutions have to spearhead progress in these projects”.

Along these lines, the head of Valenciaport recalled that Valenciaport has been committed to sustainability and environmental issues for many years, which “have always been in the DNA of the Port of Valencia. There is a lot of experience and effort, in fact, the carbon footprint in recent years has been reduced by 35% while traffic has increased. This is achieved with large and small actions”.
Source: Port Authority of Valencia

2022-05-23
hellenicshippingnews..
Previous: Ukraine grain exports could reach 1.5 mln tonnes in May – analyst
Next: Milaha Announces Resignation of President and CEO