The Valencia Containerised Freight Index (VCFI) for August has grown again, albeit more timidly than the previous month, at a rate of 2.51%, making a total of thirteen months of upward trend in freight exports from Valenciaport. Thus, in August it stands at 3,513.54 points and accumulates an increase since the beginning of the historical series in January 2018 of 251.74%.

The increase in the VCFI is a generalised trend and all the areas under study are experiencing an increase, albeit a more moderate one, except for the Baltic States and Atlantic Europe, which remain constant. The strong demand for maritime transport, together with the persistent problems of co-determination and the possible decrease in labour in the summer period in some ports, set the tone for the increase in freight rates.

According to the RWI/ISL index, which is compiled by the Leibniz Institute for Economic Research, the volume of TEUs handled by the 91 main ports – which account for 60% of total container traffic – has increased again in August, evidencing the strength of demand for container transport. In the same vein, the latest data published by the Good Trade Barometer of the World Trade Organization (WTO) has obtained its highest value since its first publication in 2016, a fact that evidences the dynamism of international trade.

On the other hand, according to Alphaliner’s data, the fleet idle for strictly commercial reasons remains at minimal levels due to the increase in demand. Thus, 48 vessels are idle, with a total of 174,588 TEU, representing 0.7% of the total active fleet and showing an almost imperceptible increase compared to the level of the idle fleet at the end of July with 161,821 TEU. 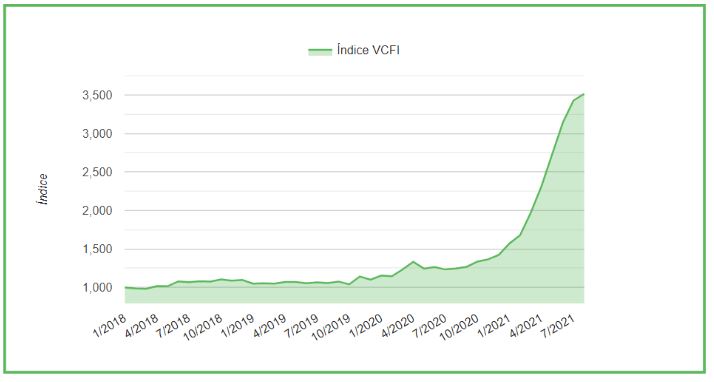 As far as fuel prices are concerned, mixed trends can be observed. The average price of a barrel of European Brent crude oil fell by 6.07% in August compared with the previous month, from $75.17 in July to $70.16 in August. About the price of bunkering – the refuelling of ships at sea – in the 20 main ports of the world and according to the data offered by Ship&Bunker, the average price of IFO 380 (Intermediate Fuel Oil) has gone from $448 in July to $449.50 in August, which represents an increase of 0.34%. Conversely, VLSFO (Very Low Sulphur Fuel Oil) decreased by 3.13% from $559.50 in July to $542 per tonne in August.

By geographical area, during August the intensity of freight growth has softened in most areas, although upward pressure remains the dominant trend in all of them. Africa East Coast (10.05%) experienced the highest increase, followed by the Indian Subcontinent (8.77%) or Latin America Pacific (5.68%).

Congestion in many ports is a globalising phenomenon. As the shipping market continues to operate at near 100% utilisation levels for much of the year, supply chains are overloaded. As for the United States, ships are again piling up in the Californian ports of Los Angeles and Long Beach. In the last week of August, the number of container ships waiting in San Pedro Bay reached 28 units compared to the seven ships waiting in San Francisco Bay to berth in Oakland.

The situation in Europe is less evident, although port traffic congestion is also present. Many major ports are congested due to strong cargo demand, the reduced labour force from summer holidays and COVID-19 restrictions, and long container dwell times, affecting overall terminal throughput.

Freight rates have again been influenced by the problems of congestion and the difficulty of getting slots on ships in this area. Although the trend has eased in recent months, the level of exports from Valenciaport to Morocco is much higher than in previous years. 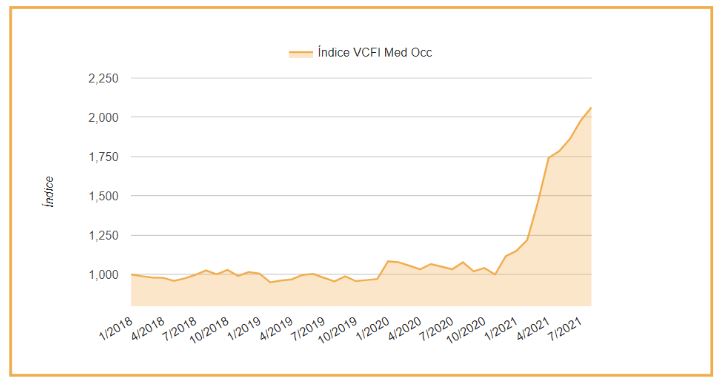 As for the Far East sub-index, August has now been up for four consecutive months, but this time its growth has eased to a rate of 1.37%, standing at 3,755.64 points and accumulating a growth since the beginning of the series of 275.56%.

One of the factors behind this further increase is port congestion. On the export side, the Yangtze Estuary and Hangzhou Bay ports of Shanghai and Ningbo-Zhoushan are the most affected, while the port of Yantian also has numerous ships waiting to dock. Another trigger may be China’s fear of another COVID-19 spike, which would mean the closure of its factories. In Vietnam, for example, the port of Ho Chi Minh City has prolonged its closure and has caused import cargo to pile up due to factory closures.
Source: Port of Valencia